Mash-up: Not all immigration

Everybody wins ... or not

The Supreme Court's split ruling on Arizona's immigration law, known as SB 1070, has both sides claiming victory and each side saying the other had better watch its step.

Today's decision by the U.S. Supreme Court is a victory for the rule of law. It is also a victory for the 10th Amendment and all Americans who believe in the inherent right and responsibility of states to defend their citizens. After more than two years of legal challenges, the heart of SB 1070 can now be implemented in accordance with the U.S. Constitution.

I am pleased that the Supreme Court has struck down key provisions of Arizona's immigration law. What this decision makes unmistakably clear is that Congress must act on comprehensive immigration reform. A patchwork of state laws is not a solution to our broken immigration system - it's part of the problem.

Union leader: This will not stand

Sheriff Joe Arpaio: 'We do the right thing'

No shortage of opinions

Not surprisingly, our readers had their own reactions to the immigration ruling. A couple of the better exchanges in the discussion:

I don't get what the big deal is. If you are in the country illegally, using services you didn't pay for, you should be deported as you are committing a crime. If you don't want to be deported, then come to the country legally by filling out your paperwork. My grandparents did it. My parents did it.

That's not the issue. Everyone believes that illegals should not be using U.S. resources. It was the way that they were going to find these people, which would have basically boiled down to harassment of illegals and legals that were not white. What we should do is research businesses that hire these people and fine the crap out of them. If we cut off the reason they are coming (low-paying jobs), then we can stop them from coming in the first place. However, no one wants to do that.

A sad state of affairs when the Supreme Court takes the sides of criminals (illegal aliens) and against American citizens. Not a good way to celebrate the U.S. birthday next week.

It's a wonderful day when the Supreme Court takes the side of the Constitution, which it has here.Â  Enjoy the 4th. 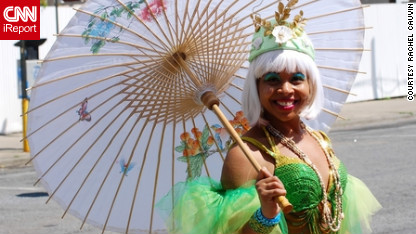 And now for something completely different

CNN iReporter Rachel Cauvin was at Coney Island's celebration of the start of summer, the Mermaid Parade. Countless people were dressed in stunning costumes, she said. "There were so many that I loved, but I am partial to the ladies who painted their faces and held colorful parasols," she said.

A parked van with two dogs inside caught fire behind a supermarket Sunday night in La Jolla, California. Passers-by heard the dogs barking inside the van and alerted bouncers at the nearby Comedy Store, who got the dogs out safely. CNN affiliate KGTV reveals what the dogs' owners were doing when the fire broke out.

On the horizon: Books from Edwards' mistress, Winehouse's father

Tuesday will see the release of "What Really Happened," Rielle Hunter's account of her affair with former U.S. senator and presidential candidate John Edwards. Edwards' political career was ruined by the scandal, but a jury refused to convict him of any crimes related to it. Also Tuesday, Mitch Winehouse will release his book, "Amy, My Daughter," about the mercurial singer who died last year in London.

1974 - The first retail product (a pack of chewing gum) is sold using a bar code reader.

2000 - The first map of the human genome is completed.