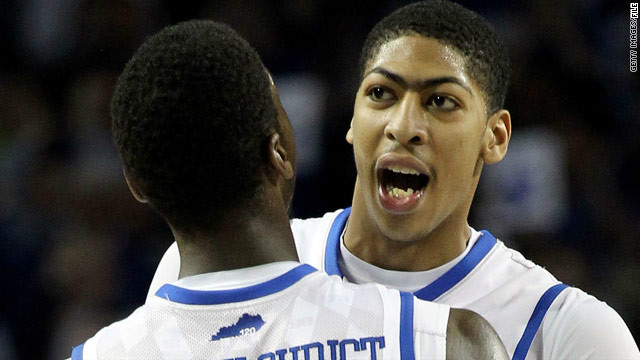 If you don't know Anthony Davis from his crushing performances while playing basketball for the University of Kentucky, you likely recognize his face.

Okay, let's be honest, you likely recognize his unibrow.

At nearly any Kentucky game it was never hard to spot fans supporting and pulling for Davis while wearing unibrow T-shirts or even glasses with a unibrow attached - even his mom wore one.

Which is perhaps why Davis, who is a hot commodity and is expected to be picked first in the NBA draft on Thursday, is recognizing a moneymaking opportunity and seizing upon it.

Davis officially filed trademark requests with the U.S. Patent and Trademark Office for the two best-known catchphrases associated with him: "Fear the Brow" and "Raise the Brow."

The trademark applications show he's filed trademarks for both phrases for practically everything from T-shirts to banners. Although it's normal for people to trademark slogans for everything under the sun, we had to chuckle when we saw that aftershaves, shavingÂ preparationÂ and skin cleansers were included on the list.

While Davis couldn't make any money off of the merchandise sold with his name or nicknames while playing in the NCAA, it's clear this likely top-choice player is making sure to get down to business ahead of the NBA draft and his likely stint on the U.S. Olympic team.

And it isn't a bad idea to get the ball rolling. Davis, if he plays anything like he did at Kentucky, is going to be a big draw wherever he lands. There's been plenty of speculation that he could get some top endorsement deals and be a Kevin Durant of sorts as he enters a stacked NBA field.

Many people over the course of his time at Kentucky have begged and pleaded with Davis to pluck away the unibrow. But in a way, it's come to define him and rally his fans behind him. So we're willing to bet that if he does get a big endorsement deal once he's in the NBA, it probably won't be with anÂ eyebrow waxing company.

Global stocks were mixed Tuesday, after a dramatically volatile day on Wall Street fueled by concerns over the US Fâ€twitter.com/i/web/status/1â€¦MS
cnni

5:42 am ET January 25, 2022 RETWEET
At least 19 people have died after a karaoke bar in Indonesia's West Papua was set ablaze following a brawl betweenâ€twitter.com/i/web/status/1â€¦VW
cnni

5:32 am ET January 25, 2022 RETWEET
The eruption this month of an underwater volcano near Tonga was hundreds of times more powerful than the Hiroshimaâ€twitter.com/i/web/status/1â€¦KV
cnni

5:01 am ET January 25, 2022 RETWEET
RT @amanpour: In 2001, I spoke with @KarzaiH on the outskirts of Kandahar by lamplight. He warned then what might happen if Afghanistan wasâ€¦
cnni