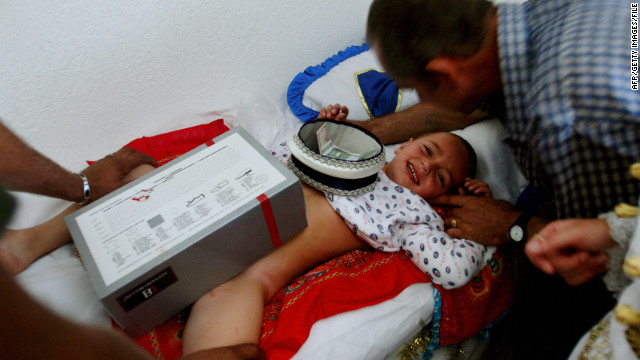 A court initially tossed out the charges, saying the parents had consented to the procedure, which constituted a "traditional ritual belonging to the Muslim community," according to Haaretz, an Israeli newspaper. One reason the court cited for defending the procedure was that a child who wasn't circumcised risked being ostracized by his peers, Der Spiegel said.

Prosecutors appealed, and a higher court ruled that circumcisions should be performed only for medical reasons. The court said its decision was for the "good of the child, who would be able to decide for himself which religious community he or she would belong to," Haaretz reported.

While denouncing the procedure, the higher court gave the doctor a pass, acquitting him because he acted in good faith and could reasonably argue he didn't realize he was committing a crime because of Germany's imprecise laws on circumcision, the paper said.

While German doctors "have been operating in a legal gray area," according to Der Spiegel, they have until now been able to cite the law's vagueness in asserting the legality of circumcision. Tuesday's court ruling would deny doctors that out, the newspaper reported.

Within hours of the decision, Jews and Muslims - not just in Germany but from all over the world - banded together to protest what they saw as an assault on their religious freedom.

"The decision by a district court in Cologne, Germany, to deem non-medical circumcision a crime places an intolerable burden on the free exercise of religion by Jews and also by Muslims who practice male circumcision as part of their religious faith," Abraham Foxman, the ADL's national director, said in a statement.

While the law did not appear anti-Semitic in its intent, Foxman continued, the ultimate message was clear: "Jews are not welcome."

"Germany has dedicated itself to re-building Jewish life, and the consequences of a ban on circumcision would be a devastating blow to the future of the Jewish community," Foxman wrote.

ŌĆ£The parliament in Berlin understands the ramifications of the ruling,ŌĆØ Rivlin said. ŌĆ£Not allowing a person to follow his religion opposes every constitution.ŌĆØ

Ali Demir, chairman of the Islamic Religious Community, called circumcision a harmless and "highly symbolic" procedure that had spanned thousands of years. Banning it could have an adverse on Muslims integrating into German society, he told Der Spiegel.

Added Aiman Mayzek of the Central Council of Muslims: "Religious freedom is very important in our constitution and cannot become the pawn of a one-dimensional ruling that also further strengthens existing prejudices and clich├®s about this issue."

At least one rabbi concurred that education was key to helping people understand the importance of circumcision to Jewish and Islamic cultures.

A "public relations campaign in cooperation with the Muslim community will do away with misunderstandings and will prevent both intentional and unintentional harm to freedom of religion in Europe," Rabbi Menachem Margolin of the Brussels, Belgium-based Rabbinical Center of Europe told Haaretz.

Circumcision entails removing some or all of the foreskin covering the penis. It's most commonly performed on newborn males for religious, personal hygiene or, in some case, preventative health care reasons, according to Medical Daily. The procedure becomes markedly more complicated when performed on older children or adults.

Der Spiegel reported that medical experts advising the Cologne court declared there is no "need in Central Europe to perform circumcisions as part of preventative health care," but the World Health organization begs to differ.

While there are short-term risks to circumcision - bleeding, hematoma and sepsis, among them - there is "substantial evidence" the procedure can help protect against urinary tract infections, syphilis, HIV and chancroid and invasive penile cancer. Male circumcision also increases sexual pleasure for men and women, WHO reports. (report PDF)

Roughly 30% of men in the world have undergone the procedure, and about two in three of those are Muslim. The procedure is routinely performed in Israel, Canada, Australia, New Zealand, the U.S. and much of the Middle East, Central Asia and West Africa, according to the organization.