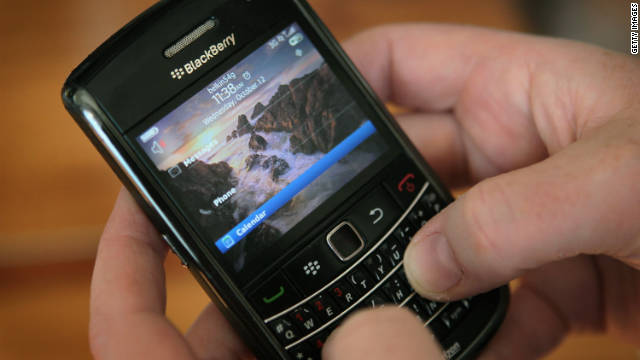 "A blackberry was squished by an apple," said┬ĀRKW29.

On the other hand, plenty of readers say businesses are warming up to other devices and adding support for people to "BYOD," as in "bring your own device." END_OF_DOCUMENT_TOKEN_TO_BE_REPLACED

The candidates for the 2012 presidential election appear to be set in stone.┬Ā Watch CNN.com Live for continuing coverage of all the news and views from the campaign trail.

9:30 am ET - George Zimmerman bond hearing - The Florida man accused of fatally shooting unarmed teen Trayvon Martin is back in court this morning.┬Ā He will again ask for bond in his case.

END_OF_DOCUMENT_TOKEN_TO_BE_REPLACED

European leaders reached a "breakthrough" deal early Friday to ease the recapitalization of struggling banks that should help draw the eurozone back from the brink of a gathering crisis.

Under the deal, European leaders agreed to create a single supervisory body to oversee the eurozone's banks which could use the single currency area's rescue funds, the European Financial Stability Facility or European Stability Mechanism, to aid banks directly without adding to governments' debt.

European Union leaders are hoping for implementation of the agreement by July 9, an EU statement said.

The deal means Spain's formal request this week for eurozone bailout funds to recapitalize its troubled banking sector will not add to its sovereign debt. Madrid had feared the increased debt load would send its borrowing costs even higher.

Ireland, which hopes to rework the terms of its bailout deal, and Italy, which like Spain is battling with spiraling government borrowing costs, could also benefit from the new deal.

The meeting is expected to include talks on Russian arm sales to Syria, the State Department said.

U.S. officials have advocated a political transition plan in Syria, but Russia opposes the idea of foreign intervention in the violence-hit nation.

After the meeting, Clinton will attend an emergency gathering led by international envoy to Syria, Kofi Annan, in Geneva on Saturday. U.N. Secretary-General Ban Ki-moon said he hopes the meeting marks a "turning point" in diplomatic efforts.

Rebekah and Bryan Largent clung to one another as their worst fears were confirmed: Their home was among the 346 destroyed in a wildfire ravaging the outskirts of Colorado Springs, Colorado.

"We're not sure what we are going to do next," Rebekah Largent told CNN affiliate KKTV late Thursday just minutes after the couple learned their rented home was among those turned to a pile of smoldering ash and rubble.

The wildfire has wreaked havoc since it began over the weekend on the western outskirts of Colorado Springs, forcing more than 36,000 to flee their homes as it hop-scotched through heavily populated neighborhoods and threatened the Air Force Academy.

By early Friday morning, the fire had scorched more than 16,700 acres and killed at least one person, authorities said.

More than 20,000 homes and 160 businesses were under threat from the Waldo Canyon Fire, which was 15% contained by early Friday, according to InciWeb, a U.S. multi-agency fire response website.

George Zimmerman and his attorney will be back before a Florida judge Friday to argue Zimmerman should be allowed bond a second time despite misrepresenting his finances.

Zimmerman, charged with second-degree murder in the February shooting death of Trayvon Martin, will attend the morning hearing unshackled and in civilian clothing.

Zimmerman was released on a $150,000 bond after his arrest. But he was ordered back to jail early this month after the judge revoked his bail, citing about $150,000 in donations in an account controlled by Zimmerman that he had not disclosed at the first bond hearing in April.

Blistering, potentially deadly heat forecast for much of U.S.

Much of the Central and Eastern United States will bake under intense heat Friday, prompting warnings about air quality and fears about the health of those unable to find refuge in cooler confines.

The blistering conditions won't be fleeting: High temperatures not only are expected to be around or above 100 degrees Fahrenheit in locales from Topeka, Kansas, to Washington, DC, on Friday, but they're expected to stay at about that level in many places through next week if not longer.

"Heat-related illness such as heat exhaustion or heat stroke are a real threat, dehydration can occur quickly," the National Weather Service's bureau in Indianapolis, where highs should hit 101 on Friday, noted in issuing an excessive heat warning. "The extended period of heat also will cause drought conditions to worsen and raise the concern for wildfire development."

The thermostat in St. Louis, Missouri, is forecast to hit 108 degrees and remain above 100 through next Thursday, at least, according to the weather service.

That's prompted the city health department to remind residents to limit outdoor activities, not to leave children or pets in vehicles and to watch out for signs of heat exhaustion.

9:45 am ET January 30, 2023 RETWEET
Covid-19 remains a global health emergency, the World Health Organization said on Monday, but it acknowledged the pŌĆtwitter.com/i/web/status/1ŌĆ”Ap
cnni

9:15 am ET January 30, 2023 RETWEET
Ryanair expects it will be able to charge higher prices for flights over Easter and the summer, thanks to strong deŌĆtwitter.com/i/web/status/1ŌĆ”7A
cnni

9:45 am ET January 30, 2023 RETWEET
Covid-19 remains a global health emergency, the World Health Organization said on Monday, but it acknowledged the pŌĆtwitter.com/i/web/status/1ŌĆ”Ap
cnni

9:15 am ET January 30, 2023 RETWEET
Ryanair expects it will be able to charge higher prices for flights over Easter and the summer, thanks to strong deŌĆtwitter.com/i/web/status/1ŌĆ”7A
cnni

At least 17 are dead and 83 injured after a blast inside a mosque mostly attended by law enforcement officials in PŌĆtwitter.com/i/web/status/1ŌĆ”OP
cnnbrk