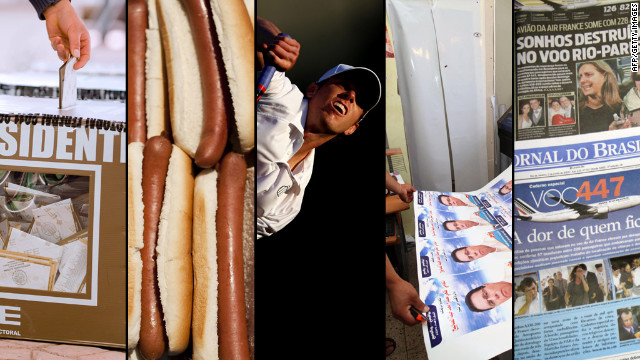 By Monday morning we should know who the next president of Mexico will be. Voting was taking place Sunday in the race to succeed President Felipe Calderon.

Calderon has engaged drug cartels in a bloody six-year war for control of parts of Mexico, mostly in the north near the U.S. border. More than 47,500 people have died in drug-related violence nationwide, according to government statistics.

Aimee Copeland, the graduate student in Georgia who has been ravaged by flesh-eating bacteria, is expected to be released from the hospital on Monday. Copeland has lost her hands, one leg and her other foot to necrotizing fasciitis, which followed her fall into a creek in a zip-line accident May 1. Nevertheless, Andy Copeland says his daughter feels optimistic and "blessed to be different."

Wednesday is Independence Day, which means all federal and most state and local government offices will be closed, parades will be held, and Coney Island will host Nathan's Famous 97th annual July Fourth International Hot Dog Eating Contest.

Qualifying contests have been held in 12 cities across the country since April, according to the Nathan's Famous website. The top male and top female finishers from each qualifier will compete in Wednesday's final, starting at 11:30 a.m. for the women and noon for the men. ESPN will show the contests at the conclusion of its Wimbledon coverage that afternoon.

The two-week-long tennis tournament known formally as The Championships, Wimbledon, will continue through the week and conclude with the women's singles final on Saturday and the men's singles final on Sunday. Novak Djokovic and Petra Kvitova were the singles champions at last year's event at The All England Lawn Tennis & Croquet Club in the London suburb of Wimbledon.

France's Bureau of Investigation and Analysis will publish its final report on the crash of Air France Flight 447 over the Atlantic Ocean. All 228 people aboard were killed when the plane crashed in stormy weather en route to Paris from Rio de Janeiro, Brazil, on June 1, 2009.

It took four searches and nearly two years to locate the bulk of the Airbus 330-300's wreckage, still containing many bodies, in a mountain range deep beneath the surface. More than 70 bodies were never recovered.

Attorneys for Monsignor William Lynn will be back in court on Thursday for a hearing on whether he should be placed under house arrest until he is sentenced August 13.  Lynn was found guilty on June 22 of one count of child endangerment, the first time a U.S. church leader not accused of improper contact has been convicted of such a charge.

Libyans will vote Saturday for a national congress, which will appoint a prime minister and Cabinet, as well as a 60-member committee to draft a new constitution. The government and constitution will replace the National Transition Council, which has ruled the North African country since the NATO-backed revolution that overthrew longtime dictator Moammar Gadhafi in 2011.