RT @CNNPolitics: JUST IN: The House committee investigating the January 6 attack on the US Capitol has formally approved holding Steve BannãÎ

Biden tells House Democrats that tuition-free community college is expected to be cut from the final version of theãtwitter.com/i/web/status/1ãÎSJ

Fox News anchor Neil Cavuto, who has been open over the years about his journey with multiple sclerosis, has testedãtwitter.com/i/web/status/1ãÎ8f

RT @CNNPolitics: BREAKING: US Rep. Jeff Fortenberry indicted on charges stemming from a federal investigation into contributions made to hiãÎ

The FBI is conducting "law enforcement activity" at the Washington home of Russian oligarch Oleg Deripaska, a closeãtwitter.com/i/web/status/1ãÎId 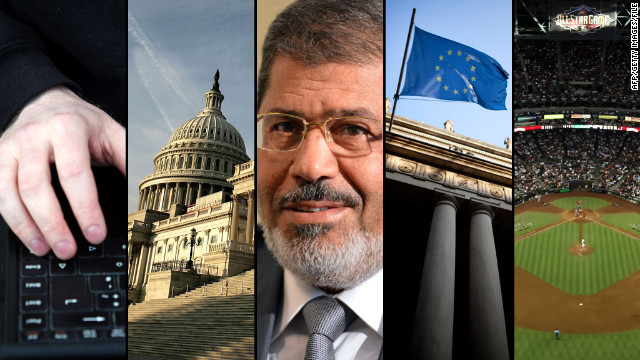 Welcome to our weekly preview of some of the stories that CNN plans to follow over the next seven days. Get a good look now, in case you're one of the thousands of people who might have some difficulty checking out the Web tomorrow:

There goes the Internet

OK, the Internet isn't really going anywhere. But hundreds of thousands of people might be unable to access it on Monday because the FBI is going to stop propping up the computers that still are infected with a computer virus that's been around for years.

The FBI on Monday will shut down Internet servers that it temporarily set up to support those affected by the DNSChanger virus, which was spread by Estonian cybercriminals to millions of computers over the past five years. Turning off those servers will knock all those still infected offline, CNNMoney reports.

The agency has offered a step-by-step planô on how to check to check your computer for the virus.

Expect to hear more debate this week on the United States' health care reform law. The U.S. House is expected to vote Wednesday on whether to repeal the measure.

But don't expect the effort to change anything, even if the repeal passes the Republican-led House. The Senate, controlled by Democrats, has turned down a number of previous attempts to repeal or defund the law since it passed in 2010.

The latest attempt by House Republicans comes a couple weeks after the Supreme Court upheld the law.

Wednesday'sô House vote on repealing the Affordable Care Act will signal to the public that Republicans are "resolved to get rid of this,"ô House Speaker John Boehnerô said.

President Mohamed Morsy called lawmakers back into session, putting him at odds with constitutional experts and Egypt's military. In June, the military said it was assuming legislative power after Egypt's highest court ruled that a third of lawmakers had been illegally elected.

Restoring parliament would siphon power away from generals who ran the county for more than 16 months after the 2011 revolution that ousted longtime strongman Hosni Mubarak.

Can Europe stabilize its debt crisis?

Investors around the world will keep a close eye on this week's talks between European finance ministers on how to shore up some of Europe's debt-saddled countries and banks.

Euro area leaders agreed late last month on a number of steps designed to stabilize eurozone credit markets and strengthen the region's banking system. But officials will meet early this week in Brussels to hammer out the details.

The 7% level is psychologically significant since it typically signals that financial rescue is needed, CNNMoney reports.ô Greece, Ireland and Portugal moved much higher before they required a bailout, but the number still unnerves investors.

The runner-up in Mexico's recent presidential election is expected to challenge the results this week, as allegations of vote-buying (with gift cards) and other irregularities swirl.

Leftist Andres Manuel Lopez Obrador finished second with 31.59% of the vote, short ofô Enrique PeûÝa Nieto's ô 38.21%. PeûÝa Nieto is the presumptive president-elect, as the country's electoral tribunal has yet to ratify the results.

Theô federal electoral tribunal will start accepting complaints of voting irregularities.ô PeûÝa Nieto's opponents have accused his party ofô buying votes through thousands of cards that could be redeemed for products at supermarkets.

Major League Baseball's 83rd All-Star Game will get under way Tuesday at Kauffman Stadium in Kansas City. The National League beat the American League the past two years, and the game already is breaking records with American League starter Josh Hamilton, the Rangers outfielder who garnered an unprecedented 11,073,744 votes. The National League boasts first-time all starô R.A. Dickey, the 37-year-old New York Mets pitcher and Major League Baseball's only knuckleballer. Tune in to CNN Newsroom on Monday for a new segment on Dickey's remarkable life and season.

Record-breaking rains and heavy flooding have killed at least 73 people in India this week, according to disaster mãtwitter.com/i/web/status/1ãÎA4
cnni

5:07 am ET October 20, 2021 RETWEET
The Chinese government has ordered the country's coal mines to "produce as much coal as possible" as it tries to inãtwitter.com/i/web/status/1ãÎ0h
cnni

4:53 am ET October 20, 2021 RETWEET
The world plans to produce far more fossil fuel than it should to stay under dangerous climate limits, UN saysãtwitter.com/i/web/status/1ãÎWn
cnni

4:20 am ET October 20, 2021 RETWEET
Booster protection in the US could soon expand to a much broader population, as a source says the US government likãtwitter.com/i/web/status/1ãÎQm
cnni

4:00 am ET October 20, 2021 RETWEET
A shooting in Kenosha, Wisconsin, has left at least three people dead and two others in critical condition, officiaãtwitter.com/i/web/status/1ãÎaQ
cnni