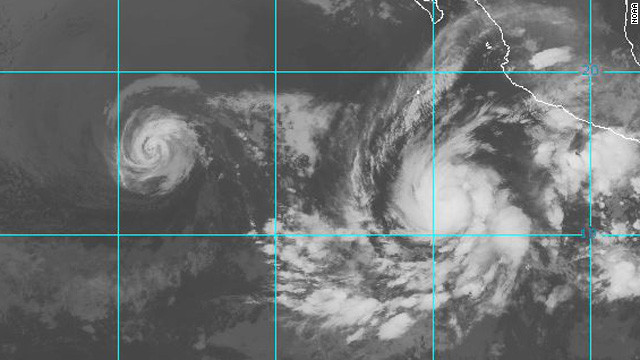 Hurricanes Daniel, left, and Emilia are shown in an infrared image on Monday morning.
July 9th, 2012
06:17 AM ET

At 2 a.m. PT, the Category One storm with maximum sustained winds of 75 mph was about 760 miles south of the southern tip of Baja California and moving west-northwest at 12 mph, forecasters said.

Emilia is strengthening rapidly and is forecast to become a Category Two storm later on Monday and a Category Three, or major hurricane, with maximum sustained winds above 111 mph, on Tuesday, the hurricane center said.

Emilia posed no threat to land, however, and no coastal watches or warnings are in effect.

Emilia is the fourth Pacific hurricane of the season. Hurricane Daniel formed Friday and early Monday was a strong Category One storm with maximum sustained winds of 90 mph.

Daniel was about 1,270 miles west-southwest of the southern tip of Baja and moving west at 15 mph.

It was expected to weaken to tropical storm status sometime Monday as it encounters colder waters in the Pacific.

Tell us how hurricanes are affecting you.

The search for dozens of missing people in the rubble continues following the partial collapse of a residential buiâ€twitter.com/i/web/status/1â€¦g6
cnni

6:40 am ET June 25, 2021 RETWEET
The UK is honoring Alan Turing by unveiling a mural at the country's spy headquarters. He will also be the firstâ€twitter.com/i/web/status/1â€¦Nq
cnni

6:20 am ET June 25, 2021 RETWEET
Derek Chauvin, the former police officer who killed George Floyd on a Minneapolis street last year, is set to be seâ€twitter.com/i/web/status/1â€¦tf
cnni

6:00 am ET June 25, 2021 RETWEET
A statue of George Floyd that was unveiled in New York on Juneteenth by Floyd's brother was vandalized early Thursdâ€twitter.com/i/web/status/1â€¦II
cnni