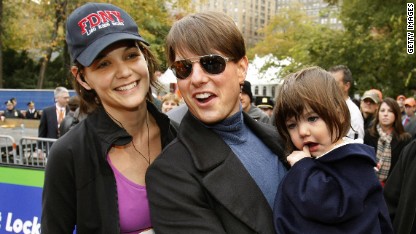 What's up with Tom and Katie?

The quick divorce settlement between Hollywood stars Tom Cruise and Katie Holmes (predictably) stirred up a discussion about Scientology, the controversial religion Cruise follows. Many of the comments were judgmental, speculative and some downright cruel, but  a few seemed to strive for a bit of balance:

He has dissolved three marriages with Scientology at the center. I do not see how these people who have very similar problems as normal people - except for the fact that they also have multimillion-dollar portfolios - think their problems are solved by this preaching self-reliance. I would need little help, too, if I had 40 people on my payroll. My religion is my faith, though, so he can have his. Maybe after this last family crash however, he can see that he is putting his guru above those he supposedly cares deepest for.

I can see her decision to divorce as reasonable on many levels. I cannot see him, based on how he has handled things in the past, settling this surprise divorce in this way ... unless she has very solid ground to stand on.

Yes, the very solid ground being that she doesn't want to be married to him anymore.  Why fight her?  Why keep someone who doesn't want to be there?  I am sure he had a tight pre-nup, and she is obviously NOT a gold digger.  Best to them both!

Agreed.  Katie's legal position was very strong thanks to smart maneuvering by her lawyers on jurisdiction and other matters.  Plus she has been the primary parent to Suri all along, so it was going to be hard for Tom to wrestle primary custody away from her.  The biggest factor, however, may have been the damage being done to Tom's career and pressure from the Church of Scientology to put a stop to the bad press.

This video, like many people you may know, is at once both strange and wonderful. Filmmaker Jeremiah McDonald made a video of himself at age 12. Now he's 32 and conducts a virtual interview with his younger self. Kind of freaky.

A cheerleader for a minor-league football team became a hero Saturday night in Indianapolis, CNN affiliate WISH reports. When a coach for the Indianapolis Tornadoes collapsed on the field during the game, Jessica Anderson - a member of the Syrens cheerleading squad and an emergency medical technician and firefighter - administered CPR. The coach was up and talking later at a hospital, WISH reported. 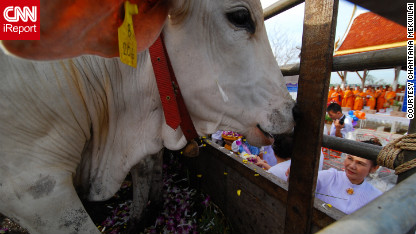 CNN iReporter Chantana Mekwilai shot a series of images at an animal rights ceremony in Pathum Thani, Thailand, on Sunday. He says participants donated money to purchase animals from slaughterhouses and food markets; the animals were then freed in a celebration of peace and life. "I believe that all creatures in this world love freedom, especially freedom to live," he told CNN. "The most impressive thing is I can see the animals' eyes when they receive freedom. Their eyes seem to say, 'Thank you.' "

Melinda Gates: Give all women a choice

Melinda Gates, the socially conscious wife of Microsoft founder Bill Gates, says in a CNN guest column that women in developing countries need to have access to birth control to take control of their own destinies.

I'm passionate about family planning because when I travel and talk to women in developing countries, what's universally clear is that they demand access to contraceptives. They want the power to determine their future. They know that when they can decide when they have children, they are healthier, their children are healthier, their families are more successful and their communities are more prosperous.

Newly elected Egyptian President Mohamed Morsy has called for Egypt's parliament to convene Tuesday, even though the country's highest court dissolved it last month and the ruling military council took over legislative powers.

In a considerably more mundane showdown Tuesday night, the top players in the American and National leagues will meet up in the Major League Baseball All-Star Game in Kansas City, Missouri. The winning league gets home-field advantage in the World Series this fall.

1985 - Coca-Cola announces that it will bring back its original Coke formula as Classic Coke after its failed launch of "New Coke" earlier in the year.

1985 - The Greenpeace ship "Rainbow Warrior" is sunk off New Zealand, killing a photographer on board.