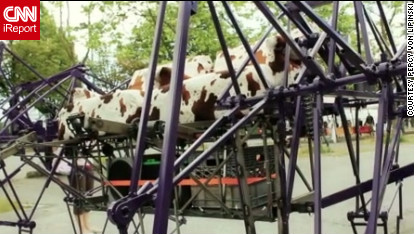 The Panterragaff. It's not your father's Huffy.

Award-winning CNN iReporter Percy von Lipinski, a freelance videographer in Vancouver, British Columbia, filed a fun video report from the Vancouver Mini Maker Faire, a quirky convention devoted to do-it-yourself art projects. He got to try out the Panterragaff, a 12-legged, two-person walking bicycle, and was especially amused by one particular interest group.

"So when I heard that there was going to be the world's first and only Panterragaff at the same location as the Knot Tying Association, I just knew I had to attend," Lipinski said. "And was I glad I did. I spent the day there looking over some of the craziest concoctions that I could have ever imagined."

Lipinski brought some of his film and video students from the Pacific Audio-Visual Institute to help with camera work.

The Olympic Torch arrives at London's Windsor Castle on Tuesday, and guess who's at the door to welcome it?

Teen loses arm but saves himself from alligator

A Florida teenager lost part of his arm in an alligator attack on Monday, but the boy's family says 17-year-old Kaleb "Fred" Langdale made a smart move that saved his life. 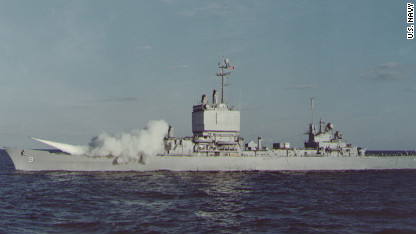 What am I bid for this guided-missile cruiser?

The Defense Department is auctioning off the USS Long Beach, a guided-missile cruiser the Navy no longer needs. But don't expect to start your own navy; it's being sold for the scrap metal, CNN affiliate KPHO reports. That's a lot of scrap metal.

The Long Beach was launched in 1959 and decommissioned in 1995. The auction is being conducted by a Scottsdale, Arizona, company called Government Liquidation.

The U.S. House of Representatives has scheduled a vote Wednesday to repeal the Affordable Care Act, the health-care reform law that is President Barack Obama's top legislative achievement. The Supreme Court upheld the constitutionality of most of the law June 28. If the repeal is approved in the House, it is unlikely to survive the Senate, and Obama certainly would veto it.