Is it hot on this planet, or is it just me?

This year's - and this decade's - weather extremes have heated up the debate over climate change, aka global warming. NOAA reports that nine of the 10 warmest years ever recorded have occurred since 2000. But does that indicate climate change, or is it just a normal variation? There is a relationship between the two, says Chris Field, founding director of the Carnegie Institution's Department of Global Ecology.

As we change the climate, we're shifting the odds for extreme weather. Increasingly, we are loading the dice towards these very damaging kinds of extremes.

In Maryland, it even looks hot

CNN iReporter Janie Lambert is sweating it out at home in Maryland, where record heat and nasty storms are making it a decidedly uncomfortable summer. She shot a series of pictures, including the one below, Tuesday evening. "The images just say hot, sultry and humid," she told CNN. "The heat and humidity just smack you in the face. It is nauseating to be out for five minutes. I am so looking forward to fall!" 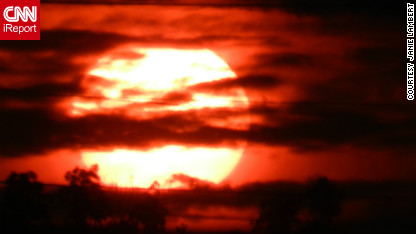 That's no way to cool off

A miniature horse named Danny Boy is lucky to be alive after falling into a tiny water tank Monday night, CNN affiliate WHO reports. The 400-pound animal fell through a plywood cover over the tank and became stuck, owner Roger Davis of Marshalltown, Iowa, told the station. Firefighters used straps and brute strength to lift Danny Boy to safety. The horse suffered some bad scrapes on his legs but looks like he will be OK, Davis says.

I hear North Korea is lovely this time of year

CNN iReporter Jora Frantzis says she and a friend decided to start journeying to "off-the-beaten-path destinations." You can't get much farther off the beaten path than North Korea, where they spent four days recently. Check out her fascinating photos from inside the reclusive country.

No hanky-panky, just hugs and cuddles

Former FBI Director Louis Freeh is due to release a report Thursday on his official investigation into how Penn State University handled sexual abuse allegations against former football coach Jerry Sandusky. In the evening, the Penn State board of trustees plans a closed meeting, followed by a public meeting Friday.

More evidence is expected to be released Thursday in the February shooting death of Trayvon Martin in Sanford, Florida. The Orlando Sentinel reports the new evidence will include statements from witnesses, investigators' reports and notes, and suspect George Zimmerman's prior calls to police.

5:01 am ET January 25, 2022 RETWEET
RT @amanpour: In 2001, I spoke with @KarzaiH on the outskirts of Kandahar by lamplight. He warned then what might happen if Afghanistan wasâ€¦
cnni

4:34 am ET January 25, 2022 RETWEET
About 4,000 people have summited Mount Everest, the world's highest peak. And only eight of them have been Black.â€twitter.com/i/web/status/1â€¦9L
cnni