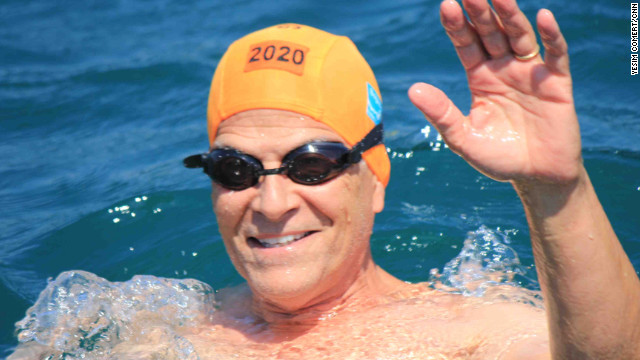 ‚ÄúI‚Äôm putting my money on Michael,‚ÄĚ Spitz said when asked by CNN who he expects to see victorious at the London games. Spitz spoke to CNN in Istanbul moments after he plunged into the turbulent waters of the Bosporus, the fast-moving natural channel that divides the city in two.

When asked why he believed that Michael Phelps would outshine his rival Ryan Lochte, Spitz told CNN that Phelps had ‚Äúmore experience.‚ÄĚ ¬†The two U.S. Olympic swimmers are expected to go head-to-head in London in the 200- and 400-meter individual medleys.

The 24th annual Bosporus Cross Continental race, introduced in 1989 by the National Olympic Committee of Turkey, is said to be the world‚Äôs only swimming competition to span two continents - Europe and Asia. This year 1,200 athletes from around the world will compete in the race.

The race will begin Sunday on the Asian side of the Bosporus in the Istanbul neighborhood of Kanlica, and end in the European neighborhood of Kurucesme. In addition to the swimming competition, this year‚Äôs event also includes rowing and canoeing races.

Mark Spitz soared to sports stardom when he won seven gold medals at the 1972 Munich Olympic Games, a record broken at the 2008 Olympic Games in Beijing by Michael Phelps. Before he retired early, at the age of 22, Spitz had won a total of¬† nine Olympic golds, one silver, one bronze and set 33 world records.

Overheard on CNN.com: Forget uniforms, U.S. Olympians would be better off 'naked'

Editor's note: This post is part of the¬†Overheard on CNN.com¬†series, a regular feature¬†that examines interesting comments and thought-provoking conversations posted by the community.

Just days after the U.S. Olympic team's opening ceremony uniforms were unveiled, it was also revealed that American designer Ralph Lauren's creations were, in fact, not born in the U.S.A. To our readers, the iconic partnership of Lauren with Team U.S.A. seemed like a guarantee that America's best athletes would be sporting homegrown threads as they represented their country at the London games.

However, this is also not the first time we've encountered mother country disconnect when it comes to Olympic uniforms. Australia's uniforms were made in China, and in 2008, Canadian uniforms came from China, as well. In 2002, American athletes sported berets to the Winter Games in Salt Lake City made by Canadian company Roots.

Our readers took to the comments with outrage that addressed not only the shock factor of the news itself, but what it meant for declining American manufacturing, supporting our own country on multiple platforms and even just how un-American the uniforms appeared in the released photo. Some expressed a little more negativity when it comes to an outsourcing attitude that has developed across the country.

One commenter echoed what many readers felt initially upon seeing the headline.

Ken Ewan: What the hell is happening in the United States? Where is our national pride? Make it happen! It's no wonder we are losing out on the trade deficit with China!

Like the decline of the American automotive industry, readers felt that this was only one thread in the unraveling state of our textile industry. We even released a list of products made in America, which commenters are also adding to, to show how people can still "buy American."

Our commenters were quick to point out their knee-jerk reaction to the style of the uniforms themselves - no matter where they were made.

Wyckette: Ralph Lauren may be an "iconic" American designer, but he certainly isn't "modern." ¬†These outfits look like they could have been worn when Gatsby was written. ¬†The committee needs to find a designer who will be a "supporter" (does that mean donates the uniforms free-of-charge?) and who can produce a design which reflect the effort the athletes exert to win and the nation they represent. ¬†Oh, and someone who can find a manufacturer in America who can produce these for less than $1600 per uniform.

END_OF_DOCUMENT_TOKEN_TO_BE_REPLACED

The passengers who safely landed a plane ‚Äď and the ones who didn‚Äcnn.it/3A7Eq5pg5p8
cnni

8:30 am ET June 27, 2022 RETWEET
After finding success overseas with a different flavor profile, Cinnabon is bringing a new item without its synonym‚Ätwitter.com/i/web/status/1‚Ä¶HJ
cnni

8:15 am ET June 27, 2022 RETWEET
US basketball player Brittney Griner is expected to attend a preliminary court hearing in the Moscow region after b‚Ätwitter.com/i/web/status/1‚Ä¶Cz
cnni

8:21 pm ET June 26, 2022 RETWEET
@Christi_Paul was always a fabulous anchor but an even better human. We will miss her. twitter.com/brianstelter/s‚Ä¶
sarasidnerCNN