The US government gives Chevron limited authorization to resume pumping oil from Venezuela after reaching a humanitātwitter.com/i/web/status/1ā¦5q

An arrest warrant has been issued for a friend of a North Carolina woman who was found dead last month while on vacātwitter.com/i/web/status/1ā¦QD

Georgia Supreme Court reinstates six-week abortion ban in the state, putting a ruling by a lower court that overturātwitter.com/i/web/status/1ā¦SN 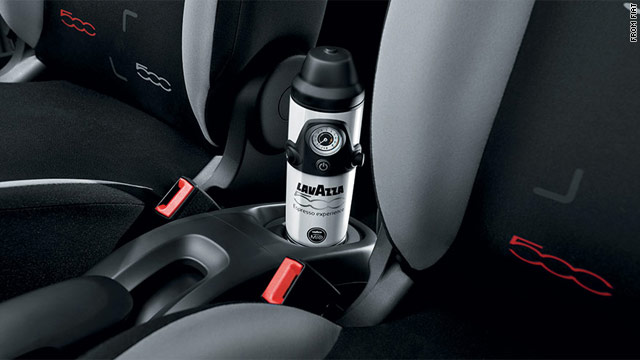 Fiat shows the Lavazza espresso machine built and docked into a console in the new European model of the Fiat 500L.
July 16th, 2012
11:31 AM ET

Drivers love fancy technology extras packed in their car and Fiat is hoping their latest innovation may be the best yet - one that can save you a trip to your favorite coffee store.

But the car designers new innovative addition to their latest line, due out in Italy in October, is landing them in some hot water with some consumers concerned about it adding to a mounting list of things that distract drivers. However, the car maker says, don't rush to judgement, you can't brew up a cup unless your car is stopped.

Their new crossover model the Fiat 500L boasts a whole range of accessories, but the one drawing the most attention and perhaps concerns, is their built-in espresso machine.Ā That's right. Forget your Starbucks runs, or trying to rush out the door to work with your homemade brew. Ā Instead, inside your console you'll find a "new coffee machine created in collaboration with Lavazza," considered to be the Starbucks of Italy.

"The 500L is the first standard-production car in the world to offer a true espresso coffee machine that utilises the technology of the 'A Modo Mio' pods," the company said in a press release. "It is perfectly integrated in the car with a deck designed expressly by Fiat."

A video put out by the automaker shows a cartoon character couple debating the choice of having to make a coffee run. But no longer!

"Do you want to take a break while flavouring the best Italian espresso coffee without stepping out of the car? With 500L even this will be possible!"Ā the company touts on its Italian site.Ā

Passengers can brew on the road, filling the car with the sweet aroma of drink of the tired.

"Ā It will be possible to enjoy ... inside a car the high quality, the unique taste, the body and creaminess of the true Italian espresso," the automaker boasts.

While it is certainly a first-of-its kind offering, the function has been met with a lot of criticism in the U.S. about concerns that drivers don't need another distraction while driving. Most of the focus of distracted driving campaigns have focused on texting, including a new set of public service announcement commercials from AT&T that show the fatal consequences of multitasking while driving.

So, when news of the coffee meets car collaboration hit the Web in the U.S., people on Twitter took the car company to task, noting that while we can't drive while texting in many places, it doesn't seem like a stellar idea to be making scorching hot coffee while taking your car to the road. It was unclear if those criticizing the idea knew the machine only worked while the car was stopped, a detail that was not touted on the car's site or in many media pieces criticizing the idea.

Even TV host Tom Bergeron weighed in on the idea, remarking that the innovative addition may be more dangerous than impressive.

And it prompted responses from others that wondered whether it would lead to lawsuits, similar to the infamous McDonald's scalding hot coffee debacle and concerns from auto blogs and writers about the safety of the innovation.

But the automaker wants to make a few things clear in the wake of the sudden uproar about the espresso machine's safety. They say they've done the testing and they are sure their setup is safe for drivers.

"You can use it only when the car is stopped,"Ā Norman Winkler, the communications press officer for Fiat in Europe told CNN. "It's quite tiny and it has a docking station in which it remains locked. The quantity of coffee is much (less) than usual use in the cups in the states. Its espresso, it's very tiny."

And it's not even clear whether those who are outraged in the U.S. will even have to deal with the issue.Ā Jiyan Cadiz, theĀ spokesman for Fiat in the U.S., said it was too soon to say what features might or might not show up in the American model.

"We have not provided any product details at this time," he told CNN. "As we get closer to our own launch of the vehicle weāll provide feature availability and specs and more context between the Euro cousin and the U.S. model."

6:22 pm ET November 25, 2022 RETWEET
Itās a draw!!!! US must beat Iran on Tuesday to advance to 16th Round ā-United States earns draw against favored twitter.com/i/web/status/1ā¦XtZ12g
susancandiotti

3:36 pm ET November 23, 2022 RETWEET
In recent interview, Pence said he didnāt think it was appropriate for him to testify before Jan 6 cmte. Interestitwitter.com/i/web/status/1ā¦wadO
susancandiotti

Flossie, at the age of almost 27 ā which is the feline equivalent of being 120 human years old, according to Guinnetwitter.com/i/web/status/1ā¦0I6D
cnni

3:00 am ET November 28, 2022 RETWEET
The image of Neymar limping off the pitch would have left millions of Brazil fans fearing the worst. Fortunately fātwitter.com/i/web/status/1ā¦Ct
cnni

2:30 am ET November 28, 2022 RETWEET
The designers behind the world's skinniest skyscraper have just given fans of ultra-luxury living an early Christmaātwitter.com/i/web/status/1ā¦dB
cnni

1:00 am ET November 28, 2022 RETWEET
In the age of reboots, revivals and prequels, Antonio Banderas is sharing thoughts on who would make a great choiceātwitter.com/i/web/status/1ā¦Xc
cnni

The US government gives Chevron limited authorization to resume pumping oil from Venezuela after reaching a humanitātwitter.com/i/web/status/1ā¦5q
cnnbrk

4:03 pm ET November 25, 2022 RETWEET
An arrest warrant has been issued for a friend of a North Carolina woman who was found dead last month while on vacātwitter.com/i/web/status/1ā¦QD
cnnbrk