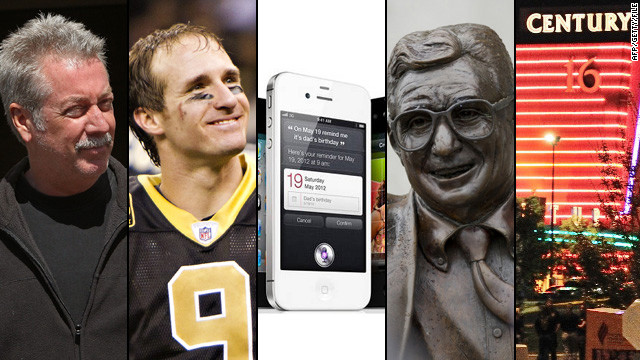 At least the Saints will still have the services of quarterback Drew Brees, who last week signed a five-year, $100 million contract to stay with the team.

Apple Inc. will report its third quarter financial results after the markets close Tuesday. Sales of iPads could help the company bounce back from somewhat disappointing second-quarter figures, but the prospect of a new iPhone this fall may have put a drag on sales of the current model.

Apple is expected to launch the latest version of its operating system, OS X Mountain Lion, on Wednesday.

The National Collegiate Athletic Association will announce Monday how it will penalize Pennsylvania State University for the way it handled suspicions of child sexual abuse by longtime assistant football coach Jerry Sandusky.

The NCAA will not levy the "death penalty" - complete suspension of the football program for a year or more - a source familiar with the case tells CNN, but there will be "significant, unprecedented penalties" that are "well beyond what has been done in the past."

The sanctions come on the heels of an investigative report prepared by former FBI Director Louis Freeh. The report held four top Penn State officials, including the late, iconic head football coach Joe Paterno, responsible for failing to stop the abuse. Sandusky, 68, was convicted in late June of 45 of the 48 sexual abuse counts he faced, involving 10 victims.

The school's board of trustees had a 900-pound bronze statue of Paterno removed from its prominent place outside Beaver Stadium on campus.

Some had called for the statue to be removed, saying Paterno chose to protect his football program's image rather than protect children from Sandusky. Others thought the statue should stay right where it was, either because of Paterno's otherwise sterling legacy as a mentor and humanitarian or because its continued presence on campus would serve as a catalyst for awareness and discussion of ethics.

William Balfour, who was convicted in May on seven counts in the murders of singer/actress Jennifer Hudson's mother, brother and nephew in Chicago, will be in court Tuesday seeking a new trial.

If the judge denies the motion for a new trial, Balfour will probably be sentenced at the same hearing to life in prison without possibility of parole.

The 2012 Olympic Games will kick off Friday with an elaborate ceremony in London, which has been preparing for this event for seven years.

CNN is covering the London Games from all angles, including how Olympians arose from the Arab Spring, how a 16-year-old competes on the world stage in an obscure sport, how London is dealing with security issues and much more.

11:52 am ET May 27, 2022 RETWEET
Critics, fans and colleagues react to Ray Liottaâ€™s death at 6washingtonpost.com/arts-entertainâ€¦z5
susancandiotti

11:24 am ET May 27, 2022 RETWEET
Critics, fans and colleagues react to Ray Liottaâ€™s death at 6washingtonpost.com/arts-entertainâ€¦z5
susancandiotti