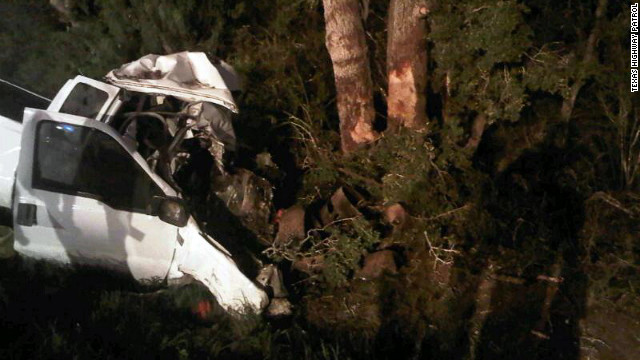 At least six of the victims were airlifted to hospitals in San Antonio and Corpus Cristi, said Trooper Gerald Bryant of the Texas Highway Patrol. Their conditions were not immediately available.

The F-250 was headed north on U.S. Highway 59 when it left the road near the unicorporated town of Goliad - about 90 miles southeast of San Antonio - and rammed into two large trees, he said. The victims were both men and woman and ranged in age from children to adults.

Bryant said the weather was dry and clear at the time of the crash and there was no evidence of alcohol at the scene. No other vehicles were involved in the accident, he said.

Days before Thomas Faleskie's 84th birthday, the detectives gave him a special surprise. They presented him with‚Ätwitter.com/i/web/status/1‚Ä¶g0
cnni

3:30 am ET September 29, 2020 RETWEET
Rapper Lil Yachty was arrested and charged with reckless driving and speeding after police say he was driving over‚Ätwitter.com/i/web/status/1‚Ä¶TJ
cnni

3:15 am ET September 29, 2020 RETWEET
Some countries are eying Sweden's 'light-touch' Covid response. It's a gamble that could backfire | Analysis by‚Ätwitter.com/i/web/status/1‚Ä¶UK
cnni

3:01 am ET September 29, 2020 RETWEET
Japan Airlines will be dropping "ladies and gentlemen" in favor of more inclusive greetings like "attention all pas‚Ätwitter.com/i/web/status/1‚Ä¶GZ
cnni