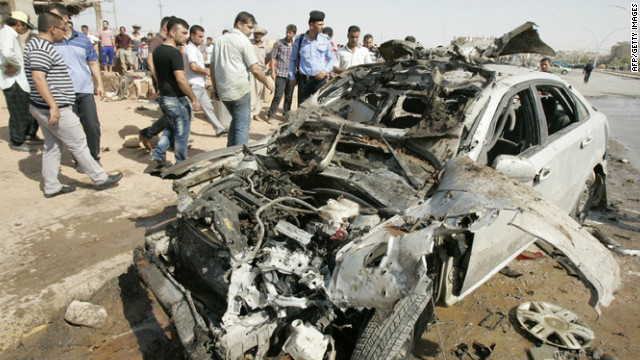 Iraqi police and pedestrians look at the shell of a car, one of a series of car bombs targeting army and police patrols.
July 23rd, 2012
04:06 AM ET

Gunmen attacked an Iraqi military base north of Baghdad early Monday, killing at least 15 soldiers, officials from the Ministry of Interior said.

The attackers used mortar rounds and small arms to target the base in the town of Dhuluiya, about 80 kilometers (50 miles) north of Baghdad, the officials said.

At least three people were wounded in the attack in the predominantly Sunni community, the officials said.

While overall attacks have dropped off in Iraq since the height of violence in 2006, insurgents have routinely targeted Iraqi security forces.

In a separate attack Monday, a series of bombings targeted a residential area in Taji, on the northern outskirts of the Iraqi capital, killing at least seven people and wounding 28, the officials said.

The blasts included a car bomb and three roadside bombs, they said.

9:30 am ET October 24, 2021 RETWEET
Throughout the weekend and into next week, parts of the West Coast will go from extreme drought to facing a seriesâ€twitter.com/i/web/status/1â€¦Fo
CNNweather

9:15 am ET October 24, 2021 RETWEET
For the first time, a pig kidney has been transplanted into a human without triggering immediate rejection by the râ€twitter.com/i/web/status/1â€¦4W
cnni