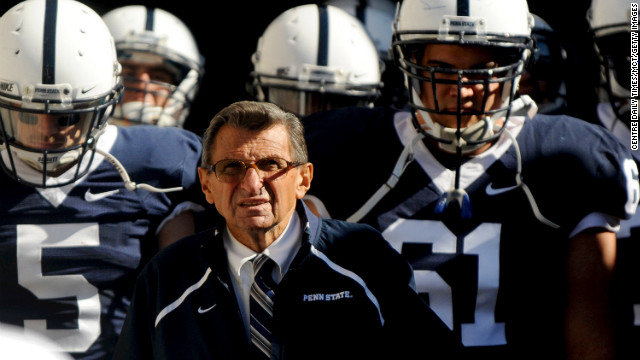 The sex abuse scandal that rocked the Penn State University community and football fans across the nation culminated Monday in an unprecedented fine of $60 million levied against the school and severe sanctions for the Division I football program.

The Nittany Lions are banned from the postseason for four years and will lose 20 football scholarships a year for four seasons, NCAA President Mark Emmert said. The NCAA also took away 14 seasons of football victories from the late coach Joe Paterno.

Money raised from fines will be used to start a charity supporting programs that serve the victims of child sexual abuse, Emmert said.

Penn State has accepted the NCAA's decision, and university President Rodney Erickson said it will not appeal.

But CNN.com readers had much to say on the penalties incurred and whether or not justice is being served. You can join the conversation on Facebook, CNN.com or CNN iReport. Here are what some had to say:

Olive Oiil: "The thing is that this only hurts the students and athletes that are there now. It doesn't do anything to change what has happened."

Seth Stuck: "Not sure what punishing today's student-athletes does to help the victims of the old, corrupt coaching staff."

Jane Colwell Glynn: "... (T)he student athletes are paying the price for one man who has died, another incredibly horrible person who will be in prison for life, hopefully two others will serve time ... and in the end are the abused children better off? To the students of PSU, I am sorry that those in charge let down the children and you the students."

Gesilene Gonzalez: "I think they should have fined the people involved in hiding the crimes but not penalize the school and rob the school of money that can potentially help many students pay for an education they can't afford themselves."

Jeff Campbell: "I think what he did to those kids was wrong but why strip the college and football team of winnings, scholarships and titles? What he did personally with those boys was wrong but had nothing to do with how good of a football team Penn State had. ... Make the person responsible pay the penalties. ... I agree if Penn State could have prevented this, then they should have responsibility and pay the fine, but don't take it out on the other athletes ... to now say they technically don't have a title under their belt."

ironmonger99: "... Penn State gets a monetary slap on the wrist. ... They cover up child rape, and this is the response? There should be no more football at Penn State. Sorry students, blame the university leaders. ... Their "leadership" is what gets you your legacy now. ..."

blogwriter: "The Penn State case places the NCAA in a nearly impossible position. While there is no evidence anyone at Penn State broke any actual NCAA rules - which mostly govern amateurism, competitive equity and academic integrity - this could be the worst scandal to hit major college sports. How can the NCAA ever punish another program for paying players, fixing grades or practicing too much if it doesn't punish Penn State? On the other hand, there are no procedures in place to punish a program for violations of (a) state statute. If Penn State gets punished in this case, why hasn't the NCAA punished any other programs because someone broke the law? The NCAA has very obviously overstepped its authority in this case, and I definitely see a major lawsuit in the works. ..."

Who will really pay?

andyoo: "Where (does the $60 million come) from? Not from the Penn State ex-president and not from the ex-sports director and definitely not from the millions they pay to the dead coach or from the child molester himself. ... (Yeah) ... The $60 million is from the extra money students (will have) to pay to go to Penn State in the future ... just like the bankers took the money and the customer has to pay for the penalties the bank got fined after the financial bubble. ... "

Terri Grigoroff: "Way too much time, money, energy and human sacrifice was spent on this football team. (S)hut it down completely out of respect for the victims."

Darlene Ranek: "As a Penn State fan (who has) one daughter attending there ... no, they should of also gotten the 'death penalty.' ... Children and covering up child rape (are) more important than football!"

Aaron Tyler: "If the NCAA really had wanted to send a message here, I would have started with the entire athletic program getting the death penalty for the 2013 school year (allowing for the fact that it would be extremely difficult for student-athletes to transfer this close to the beginning of the school year), plus the football program's death penalty running through at least the 2015 school year. Then, go ahead with the fine, but I would be in favor of doubling it, and the rest of the penalties begin once the football team is allowed to participate again."

Learn from the past

Tim Printerdude Denison: "(It was) wrong to "bury" the past. Should be left there as a reminder to not repeat the past. What will they have learned from this many years down the road?"

Ali Liliana: ŌĆÄ"(Giving) $60 million to programs for preventing child abuse, yes. Punishing current student-athletes and 'taking away wins' from those who graduated, no. You can erase it from paper, but you can never erase the memories I had at Penn State."

Melissa Sokol: "I feel sorry for the students and players that had nothing to do with this. But I understand that the NCAA had to make a point that this behavior will not be tolerated by anyone. Something had to be done."