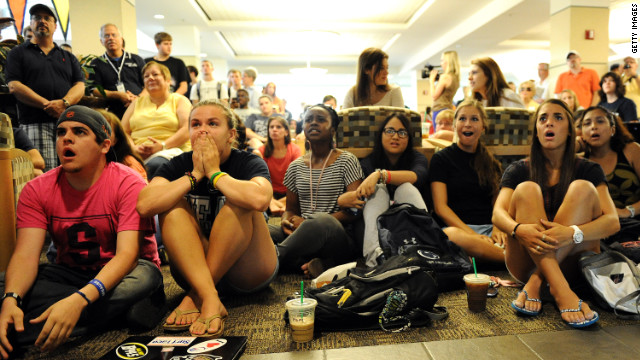 Students at Penn State react to the NCAA announcement of sanctions against their school's football program.
July 23rd, 2012
11:53 AM ET

Editor's note: The National Collegiate Athletic Association announced a $60 million fine against Penn State University on Monday and banned its football team from the postseason for four years. The school will also forfeit all football wins from 1998, NCAA President Mark Emmert said. That decision strips the late Joe Paterno of the title of winningest coach in major football college history.

[Updated 10:53 am ET] The Big Ten conference added its own sanctions against member Penn State after the NCAA announced its penalties on Monday.

Penn State will not be allowed to participate in the Big Ten conference title game for the same four years in which it is banned from post season bowl games by the NCAA. Penn State will also not be allowed to share in the conference's bowl revenues for those four years, about a $13 million hit, according to a Big Ten press release. That money will be donated to children's charities, the release said.

[Updated 10:36 am ET] The NCAA sanctions against Penn State include the following restrictions on scholarships it can offer:

"Penn State must also reduce 10 initial and 20 total scholarships each year for a four-year period."

Former Penn State player Derek Moye says the vacating of victories ordered by the NCAA can't erase his memories of what he has been a part of:

"Today we receive a very harsh penalty from the NCAA and as Head Coach of the Nittany Lions football program, I will do everything in my power to not only comply, but help guide the University forward to become a national leader in ethics, compliance and operational excellence. I knew when I accepted the position that there would be tough times ahead.  But I am committed for the long term to Penn State and our student athletes.

I was then and I remain convinced that our student athletes are the best in the country.  I could not be more proud to lead this team and these courageous and humble young men into the upcoming 2012 season. Together we are committed to building a better athletic program and university."

Do you think the NCAA penalties against Penn State were fair? Share your view with CNN iReport.

"The Freeh Report concluded that individuals at Penn State University entrusted to positions of authority, shunned their basic responsibility to protect children, and innocent children suffered as a result. Our hearts go out to the victims of this abuse and their families.

Today Penn State takes another step forward in changing the culture at the institution as we accept the penalties of the NCAA for the failure of leadership that occurred on our campus. We are deeply disappointed that some of our leaders could have turned a blind eye to such abuse, and agree that the culture at Penn State must change.

As we move forward, today’s student athletes have a challenging road ahead. But they will do the right thing, as they have always done. I am confident all of our head coaches will come together to make the change necessary to drive our university forward. Penn State will continue to fully support its established athletic programs, which provide opportunities for over 800 student athletes.

Working together, the path ahead will not be easy. But it is necessary, just, and will bring a better future. Our faculty, staff, students, athletes, and parents will work together as Penn State begins this new chapter. Though this cooperation and collaboration, Penn State will become a national model for compliance, ethics, and embodiment of the student athlete credo."

"The tragedy of child sexual abuse that occurred at our University altered the lives of innocent children. Today, as every day, our thoughts and prayers continue to be with the victims of Mr. Sandusky and all other victims of child abuse.

Against this backdrop, Penn State accepts the penalties and corrective actions announced today by the NCAA. With today’s announcement and the action it requires of us, the University takes a significant step forward.

The NCAA ruling holds the University accountable for the failure of those in power to protect children and insists that all areas of the University community are held to the same high standards of honesty and integrity.

The NCAA also mandates that Penn State become a national leader to help victims of child sexual assault and to promote awareness across our nation. Specifically, the University will pay $12 million a year for the next five years into a special endowment created to fund programs for the detection, prevention and treatment of child abuse. This total of $60 million can never reduce the pain suffered by victims, but will help provide them hope and healing.

The NCAA penalty will also affect the football program. There is a four-year ban on all post-season games, including bowl games and the Big Ten Championship game, and a future reduction in the number of football scholarships that can be granted. We are grateful that the current student athletes are not prevented from participation because of the failures of leadership that occurred. Additionally the NCAA has vacated all wins of Penn State football from 1998-2011.

We also welcome the Athletics Integrity Agreement and the third-party monitor, who will be drilling into compliance and culture issues in intercollegiate athletics, in conjunction with the recommendations of the Freeh Report. Lastly a probationary period of five years will be imposed.

It is important to know we are entering a new chapter at Penn State and making necessary changes. We must create a culture in which people are not afraid to speak up, management is not compartmentalized, all are expected to demonstrate the highest ethical standards, and the operating philosophy is open, collegial, and collaborative.

Since receiving Judge Freeh’s preliminary recommendations in January, the University has instituted several reforms. Today we accept the terms of the consent decree imposed by the NCAA. As Penn State embarks upon change and progress, this announcement helps to further define our course. It is with this compass that we will strive for a better tomorrow.

Penn State will move forward with a renewed sense of commitment to excellence and integrity in all aspects of our University. We continue to recognize the important role that intercollegiate athletics provides for our student athletes and the wider University community as we strive to appropriately balance academic and athletic accomplishments. Penn State will continue to be a world-class educational institution of which our students, faculty, staff and alumni can be justifiably proud."

Read the NCAA's binding decree that was accepted by Penn State

[Updated 9:57 a.m. ET] "Any entering or returning student-athlete will be allowed to immediately transfer and compete at another school. Further, any football student-athletes who remain at the university may retain their scholarships, regardless of whether they compete on the team," according to the NCAA statement on the Penn State sanctions.

[Updated 9:53 a.m. ET] The Big Ten conference is planning an 11 a.m. press conference to announce their own sanctions against Penn State, according to Sports Illustrated's Stewart Mandel.

[Updated 9:43 a.m. ET]  There was no dialogue or negotiation with Penn State over the sanctions, NCAA President Mark Emmert says.

Reaction from Jake Kiley, who will be an incoming freshman at Penn State:

[Updated 9:37 a.m. ET]  The NCAA will develop "an athletic integrity agreement" with the Big Ten and Penn State to ensure changes are made in the Penn State program, NCAA President Mark Emmert says.

[Updated 9:36 a.m. ET]  The NCAA tried to evaluate what effect the sanctions would have on the community as a whole, NCAA President Mark Emmert says.

[Updated 9:31 a.m. ET]  "Are we in a position where hero worship and winning at all costs has subordinated" traditional values of a university, NCAA President Mark Emmert asks.

[Updated 9:29 a.m. ET]  "There's nothing in this situation that anyone should feel good about," NCAA President Mark Emmert says. "No one feels that this is a positive situation in any sense."

[Updated 9:28 a.m. ET]  On the vacating of wins: "Obviously the 1998 date was selected because that's when the first reported incidence of abuse occurred and the failure to response appropriately,"  NCAA President Mark Emmert says.

[Updated 9:25 a.m. ET]  "I think every major college and university needs to do a gut check" on the balance between athletics and academics, Oregon State president Ed Ray says.

[Updated 9:19 a.m. ET]  "The executive committee and I would not have agreed to just the 'death penalty,' " NCAA President Mark Emmert says.

[Updated 9:16 a.m. ET]  "No price the NCAA can levy" can change or fix the pain of what Sandusky did to victims, NCAA President Mark Emmert says.

[Updated 9:14 a.m. ET]  The NCAA is reserving the right to initiate a formal investigation to impose sanctions as needed on individuals as needed after the conclusion of criminal proceedings, NCAA President Mark Emmert says.

[Updated 9:10 a.m. ET] The NCAA will impose the following sanctions on Penn State University, according to a statement Monday morning:

"The NCAA imposed a $60 million sanction on the university, which is equivalent to the average gross annual revenue of the football program. These funds must be paid into an endowment for external programs preventing child sexual abuse or assisting victims and may not be used to fund such programs at the university. The sanctions also include a four-year football postseason ban and a vacation of all wins from 1998 through 2011. The career record of former head football coach Joe Paterno will reflect these vacated records. Penn State must also reduce 10 initial and 20 total scholarships each year for a four-year period. In addition, the NCAA reserves the right to impose additional sanctions on involved individuals at the conclusion of any criminal proceedings."

[Posted 7:23 a.m. ET] Penn State University will be hit with fines in excess of $30 million as part of "significant, unprecedented penalties" expected to be announced Monday by the National Collegiate Athletic Association, a source familiar with the case told CNN on Sunday.

While the school's football program will not face the so-called "death penalty" that would have prevented the team from playing in the fall, the school might have preferred a one-year suspension because of the severity of the scholarship losses, postseason sanctions and other penalties, the source said.

"If I were Penn State or any other school and were given both options, I'd pick the death penalty," the source said, adding the range of sanctions "is well beyond what has been done in the past" and "far worse than closing the program for a year."

The expected punishment is part of the continued fallout from the child sex abuse scandal involving former assistant football coach Jerry Sandusky, who was convicted in late June of 45 of the 48 counts he faced involving 10 young victims.

The news came the same day the statue of Penn State's iconic head football coach Joe Paterno was removed from outside the campus stadium.

Photos: Paterno through the years