The White House says US District Court Judge J. Michelle Childs is one of the people President Biden is consideringŌĆtwitter.com/i/web/status/1ŌĆ”V8 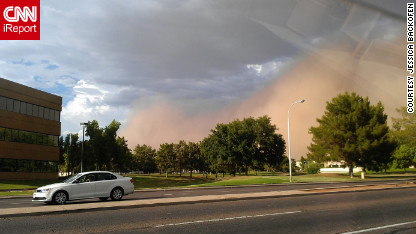 CNN iReporter Jessica Backofen says she looked up and saw a huge brown cloud rolling in over the mountains near Phoenix and captured photos of the dust storm from her car. "The winds were gusting pretty hard, so I made sure to park in a lot away from any tall trees," she said. "It was like a scene from 'The Mummy' or 'Hidalgo,' with the giant sandstorms in the deserts of the Middle East. Within 10 minutes, my position was enveloped in the cloud. The sun was almost completely blocked out, which is quite a feat in the desert. It was very intense!"

She hitched her dreams to Sally Ride's rocket

"Sally Ride is an icon to me and to all American women to dream. She was a pioneer to encourage small-town girls to think big. Most of all she got me to wonder how I fit into the world and what I had to contribute."

Admit it. You'd react the same way. At least if you were a young British soccer fan. Or a woman.

Tag on bumper, mind in gutter

A Santa Fe, New Mexico, man says people who think his vanity license plate is obscene are misinterpreting it. But are they? Visit CNN affiliate KOAT and judge for yourself.

Trying to make sense of the senseless

I keep wondering what motivated this guy and I keep thinking back, to ironically a line spoken by Alfred (Michael Caine) in 'The Dark Knight' that 'Some men just want to watch the world burn,' and in so many ways I think that is no B.S. Some people do just want to see the world burn and will attempt to carry out their sick plan no matter if they have a gun, gasoline, a hand grenade, power tools or a nuclear weapon. They will find a way to burn it up. I don't understand the mentality but I do understand that people like (the theater shooter) are out there and are dangerous animals and must be destroyed. You know how some people when you look at their photo, something just tells you this person isn't right, there is something very crazy that I saw in the eyes of Holmes when I look at his photograph, but this morning, he looked like a rabbit in a spotlight, scared to death.

On the horizon: Romney in London, Obama in New Orleans

Republican presidential candidate Mitt Romney will begin a three-country tour with a visit to London, where he is slated to meet with Prime Minister David Cameron, Deputy Prime Minister Nick Clegg┬Āand opposition leader Ed Miliband, among others.

1956 - The Italian ocean liner Andrea Doria collides with the Swedish liner Stockholm in the fog off Nantucket; more than 50 people die.

2000┬Ā- An Air France Concorde flight crashes after takeoff into a hotel in Gonesse, France, killing all 109 people on board and four on the ground.

7:01 am ET January 29, 2022 RETWEET
With Peloton's pileup of problems, we asked Peloton users to tell us if they're still willing to stick with the braŌĆtwitter.com/i/web/status/1ŌĆ”si
cnni

6:31 am ET January 29, 2022 RETWEET
A nor'easter churning along the East Coast is threatening a dangerous mix of heavy snow and strong winds for millioŌĆtwitter.com/i/web/status/1ŌĆ”j8
CNNweather

6:22 am ET January 29, 2022 RETWEET
Many people know exercise is important for good physical health, even if they personally don't work out on a regulaŌĆtwitter.com/i/web/status/1ŌĆ”pA
cnni