President Biden and Vice President Harris are joined by three former presidents for a wreath-laying ceremony at Arlâ€twitter.com/i/web/status/1â€¦0t

Joseph R. Biden Jr. has been sworn in as America's 46th president. He is addressing the nation now. Follow live updâ€twitter.com/i/web/status/1â€¦lE

Kamala Harris is sworn in as the first woman, first Black person and first South Asian to hold the office of US vicâ€twitter.com/i/web/status/1â€¦AH

Several people have been injured in an explosion in Madrid, Spain's capital, the city's emergency services saidâ€twitter.com/i/web/status/1â€¦3b

VIP attendees, including the Obamas and Clintons, are arriving at the US Capitol for Biden's inauguration. Follow lâ€twitter.com/i/web/status/1â€¦rY

From the horse's mouth

Sandy Weill, the man who built Citigroup into the financial behemoth it is today, tells CNNMoney that maybe the money giants need to be downsized a bit.

What we should probably do is go and split up investment banking from banking. Have banks do something that's not going to risk the taxpayer dollars, that's not too big to fail.

Tough job in a tough place

Photographer and CNN iReporter Brian Day documented life on the job for firefighters in Detroit off and on from 2009 and 2012.

He recently shared his photos with iReport, and CNN International put together this piece with Day telling the story of his project and his feelings toward the subjects.

Breaking up is hard to do

Guest writer Dean Obeidallah admits he's fallen out of love with his iPhone. It's shaping up as a difficult breakup; they've been through a lot together. CNN readers have some relationship advice, as well as their own takes on the breakup scenario.

You forgot about people like me - you know the Luddites that don't even own a cell phone much less an iPhone. We make smug comments about how we don't stare into our iPhone and caress it like Gollum does his ring. We make snarky remarks about saving money and interacting with real-life people directly before we slip back into the anonymous abyss.

Did this article really just compare the iPhone to an actual human relationship? WOW! We might have to rethink our priorities when people have to get empassioned by their devices just to enjoy them. I enjoy having a smart phone, but come on people.

So Dean is one of those REALLY high-tech guys who has downloaded all the apps and bought all the devices, and has turned control of his life over to the iPhone. Home lights, TV control, monitoring MPG in the car ... all by talking to Siri. He writes the above article, and sends it through the Cloud. Siri watches. He picks up his phone and dials an Android friend ...

"I'm ready. I'll be right over to make the change. Can't wait to try my new Galaxy," Dean emotes, and hangs up.

"Siri, I'm going out. Start the car and open the car bay door."

"Just out to see a friend"

As Dean gets into the car, the garage door starts to close. His car doors lock, and the engine starts to race while in Park.

"Siri, what are you doing?"

A couple of enterprising guys have fun filming things exploding in slow motion. You can't get enough of this stuff.

Tat's the way it goes

Some folks who are looking for a job or hoping to change careers are going to extreme measures beyond polishing their resumes. Concerned about first impressions and appearances, some are having tattoos removed, CNN affiliate WFTX reports.

Prince William and his wife, Catherine, will welcome the Olympic torch at Buckingham Palace on Thursday, the eve of the opening of the 2012 Olympic Games in London.

1775 - The postal system is established by the Second Continental Congress.

1947 - President Harry Truman signs the National Security Act, establishing the Defense Department, the NSA, the CIA and the Joint Chiefs of Staff.

2005 - The Space Shuttle Discovery is launched from Florida, marking the first U.S. spaceflight since the Columbia disaster. 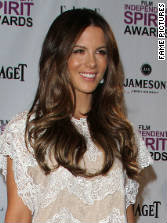 President Biden and Vice President Harris participated in a wreath-laying ceremony at the Tomb of the Unkown Soldieâ€twitter.com/i/web/status/1â€¦r2
cnni

2:54 pm ET January 20, 2021 RETWEET
"If President Biden's inaugural address is anything to go by, the global focus for the next four years will chieflyâ€twitter.com/i/web/status/1â€¦n1
cnni