At least five people killed and 16 others taken to the hospital in shooting at July Fourth parade in Illinois, offiâ€twitter.com/i/web/status/1â€¦NI

Police are responding to a shooting in downtown Highland Park, Illinois, in the area of a July 4th parade, the Lakeâ€twitter.com/i/web/status/1â€¦nT

A court has remanded the Copenhagen shopping mall shooting suspect to a psychiatric care facility for 24 days, Daniâ€twitter.com/i/web/status/1â€¦hJ 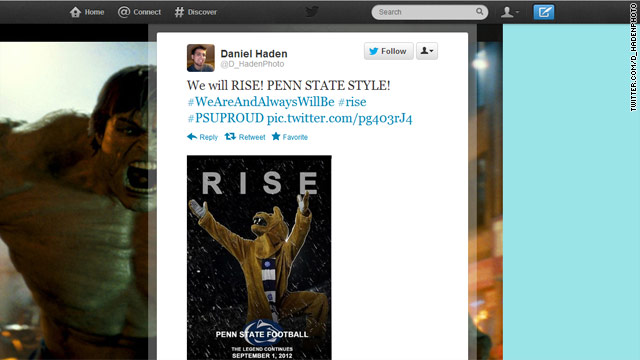 An image of a Nittany Lion with the message of "Rise" has been popular on Twitter among Penn State alums and supporters.
July 25th, 2012
01:15 PM ET

Penn State alum: 'We are more than this tragedy'

The Jerry Sandusky sex abuse scandal that rocked Penn State University and football fans across the nation culminated this week in an unprecedented fine of $60 million against the school and severe sanctions for the Division I football program. The Nittany Lions are banned from the postseason for four years, will lose 20 football scholarships a year for four seasons and had 14 seasons of football victories from the late coach Joe Paterno vacated.

There's been no shortage of commentary on the issue: Was the NCAA too quick to make the decision? What will it mean for football? What does it mean for the legacy of Paterno?

But there's also the issue of how the Penn State community will now come together. Alums have responded in force, tweeting, posting photos and defending their school - not for the actions that occurred - but to show the rest of the world they won't let this scandal be their school's best known chapter.

Some have posted photos with the "WE ARE" Penn State chant but somewhat altered. One said: "Don't let people who don't know who 'we are' ... tell us who WE ARE." It has been a rallying cry of sorts, joining together alums from long ago with recent graduates. Many have been tweeting with the hashtag #WeAreAndAlwaysWillBe. Groups on Facebook have been created so alums and current students can share their views, including one called "We Are (still) Penn State."

"This is a group dedicated to healing the scars of the Jerry Sandusky scandal, recognizing and honor the victims and rebuilding the reputation of Penn State University and its football team as one of the premier institutions of higher learning and athletic tradition not only in the country but in the entire world," the group's page said. "We still believe that 'Success With Honor' is who we are, and that Coach Bill O'Brien is the best man to carry on that tradition on and off the field. The actions of an evil man and those that enabled and apologized for him do not define us, and it is our responsibility to write the next chapter in the history of Penn State."

Patterson Weaver, a lawyer who graduated from Penn State in 2001, posted a lengthy note on Facebook describing how he cannot reconcile what happened with the school he knows. Weaver said the world should know the actions of the few responsible should not define the culture of the university as a whole.

Weaver has given CNN permission to post his note in entirety below:

"Apparently, Sports Illustrated will run a cover this week that reads 'We Were Penn State.' Sports Illustrated and so many others clearly have no understanding of who We are. As a second-generation Penn State grad, I have grown up idolizing Penn State, Joe Paterno, and the excellent institution of higher learning that Penn State was, is, and will always be. I am one of hundreds of thousands that consider the Penn State community something unique and special. This goes beyond a football field. This goes beyond school pride. The culture at Penn State, in no small part because of Joe Paterno, taught all of us how to be better people, better friends, and better members of our families and our community.

"So how do I reconcile that with the allegations that a few individuals, including Joe Paterno, remained silent about the terrible actions of Sandusky? Honest answer is I canâ€™t. The allegations do not gel with what each of us learned from our university, and yes, from Joe Paterno. Penn State has always been a beacon of how to do things the right way. Of putting academics and building quality young men and women ahead of fame and wins. I cannot reconcile these allegations with the culture that helped mold who I am. The culture that helped teach me that success is only sweet when done right. That a loss with integrity is better than a win without it. That who we are as men and women is more important than fleeting glory. I cannot reconcile what people are saying of my school with the school I lived and experienced.

"But then, thatâ€™s how I know that Penn State is what we all know it to be. The apparent actionsÂ of a few individualsÂ were tragically void of ethical wisdom or compass. But they are not Penn State. I am Penn State. We are Penn State. All of us. The hundreds of thousands that have become better people because of our school and the unique community it fosters. I find it sadly amusing that the NCAA handed down such unprecedented sanctions partly to, apparently, try to change the culture at Penn State. Clearly they know nothing about the culture at Penn State.

"But they are not alone. The media and social media frenzy that has arisen around this tragedy contains a shocking amount of glee and venom. For years many from rival schools and society generally despised Penn State and Joe Paterno for buildingÂ our reputation on the motto Success With Honor. For being so squeaky clean and selfless that the football team did not even put individual names on its jerseys. They looked at Penn State with disdain, as self-righteous and egotistical. This tragedy is exactly what they have hoped for. With glee they can point at the tragic moral misjudgments of a few individuals as supposed proof of a fundamental character flaw of the community as a whole. With delight they can scream from the rooftops, tearing their robes, that the whole university must be punished, that they must be made an example. And with their own self-righteousness, the NCAA demonstrated their moral superiority by acting as judge, jury, and executioner in handing down sanctions so unprecedented that, some say, they will not only spell the end to the football program as we know it but to the prestige and pride of the whole school.

"These individuals seem to want us alumni to stand on the highest hills, screaming in anguish as we rip and tear our degrees into a thousand pieces, burning our Penn State belongings, and then burying ourselves in the mud in shame as we screech, weep, and wailÂ about how we must repent for attending such an institution, how we were once Penn State, once unique and admired, but no longer.

"But we wonâ€™t. The actions of a few do not define us. The knee-jerk reactions of others will not end us. Our school taught us more than organic chemistry and music theory. It taught us to persevere. To overcome. To succeed - with honor. That is who WE are. That is what WE are.

"On September 1, Penn State will play its first game of the season against Ohio University. I wish I could be there. I wish I could hear what the world will hear. The earth-shattering cries of more than a 100,000 people, echoing from Erie to Scranton, from Pittsburgh to Philadelphia, of WE ARE PENN STATE. The cheer will not be merely for football. It will be for all of us. It will be a declaration that we are more than this tragedy. That we will not go quietly into the night in despair and shame. That we will improve, overcome, persevere, and excel - with honor.

"So to those so gleeful over the tragedy and the repercussions that have befallen Penn State, to those that soÂ happily write us off as defeated and finished, to those that want to discount and disparage our pride, tradition,Â and principle of Success With Honor, I have bad news.

"WE ARE, AND ALWAYS WILL BE, PENN STATE."

The alleged parade shooting suspect legally obtained the weapon used to kill six and injure dozens, according to thâ€twitter.com/i/web/status/1â€¦1G
cnni

9:15 am ET July 5, 2022 RETWEET
If you're an American visiting Italy, Greece or Spain this summer, you're in luck: Meals, hotels and tours are moreâ€twitter.com/i/web/status/1â€¦8A
cnni

8:50 am ET July 5, 2022 RETWEET
Lewis Hamilton said he supports the cause of environmentalist group Just Stop Oil, but not some of its methods afteâ€twitter.com/i/web/status/1â€¦9f
cnni

The alleged parade shooting suspect legally obtained the weapon used to kill six and injure dozens, according to thâ€twitter.com/i/web/status/1â€¦1G
cnni

9:15 am ET July 5, 2022 RETWEET
If you're an American visiting Italy, Greece or Spain this summer, you're in luck: Meals, hotels and tours are moreâ€twitter.com/i/web/status/1â€¦8A
cnni

8:50 am ET July 5, 2022 RETWEET
Lewis Hamilton said he supports the cause of environmentalist group Just Stop Oil, but not some of its methods afteâ€twitter.com/i/web/status/1â€¦9f
cnni

Person of interest taken into custody in connection with mass shooting at Illinois Fourth of July parade. cnn.it/3AmHtXy
cnnbrk

5:43 pm ET July 4, 2022 RETWEET
At least 6 people have been killed and two dozen injured in a shooting at a Fourth of July parade in a Chicago subuâ€twitter.com/i/web/status/1â€¦PE
cnnbrk

2:19 pm ET July 4, 2022 RETWEET
At least five people killed and 16 others taken to the hospital in shooting at July Fourth parade in Illinois, offiâ€twitter.com/i/web/status/1â€¦NI
cnnbrk