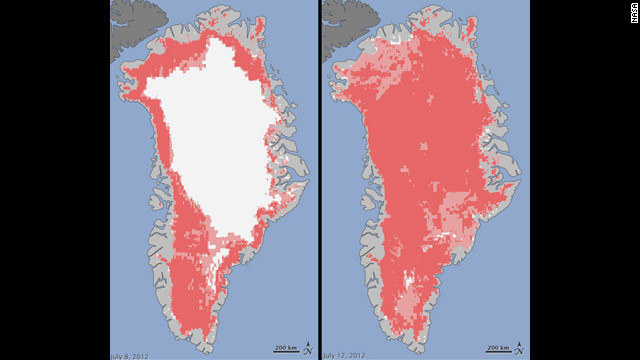 Nearly all of Greenland’s ice cover at least temporarily melted at the surface during an unusually warm stretch in mid-July - a level of melting not seen there in 123 years, NASA said.

In an average summer, melting happens on about half of the surface of Greenland’s ice sheet, which covers most of the land and is an average 1 mile thick.

But an unusually strong ridge of relatively warm air - hovering just above freezing for several hours at the highest elevation - rapidly accelerated melting this month, and satellites showed that an estimated 97% of the surface had melted at some point by July 12, NASA said.

While some of that melt water freezes in place, some of it is lost to rivers and the ocean – and mid-July’s melting caused river flooding that threatened a number of bridges, said Tom Wagner, NASA’s cryosphere program manager in Washington. (The flooding has been captured on a number of YouTube videos, including this one.)

Where this falls in the larger context of Greenland’s changing ice cap - scientists say it is shrinking and causing ocean levels to rise, with warming ocean waters causing ice on the periphery to be lost through melting and rapid flow - is a complicated question, NASA says.

Ice core samples show that the surface melting seen this July happens once in about every 150 years, and the last such melt happened in 1889, NASA said.

“It could be that this melt event is caused by normal variations that just happen once in a while,” Wagner said by phone Tuesday.

So, Wagner said, one can’t attribute July’s melting to global warming, but the melting must be digested with this in mind: that "warming is causing the loss of ice all over Greenland, and the Greenland ice sheet is shrinking."

Wagner said Greenland has lost 150 gigatons of ice per year over the last 20 years, and its shrinking cap contributes up to half a millimeter a year to global sea-level rise. Researchers haven’t determined how much of mid-July’s melt refroze or went into the ocean, NASA said.

The July 8-12 melting happened days before an island of ice twice the size of Manhattan broke off from Greenland’s Petermann Glacier on July 16. But with glacier calving attributed to ocean temperature, not the more quickly fluctuating air temperature, no one is linking the calving to July’s melting of surface ice, Wagner said.

July’s melting "combined with other natural but uncommon phenomena, such as the large calving event last week on Petermann Glacier, are part of a complex story,” Wagner said in a news release. “Satellite observations are helping us understand how events like these may relate to one another as well as to the broader climate system.”