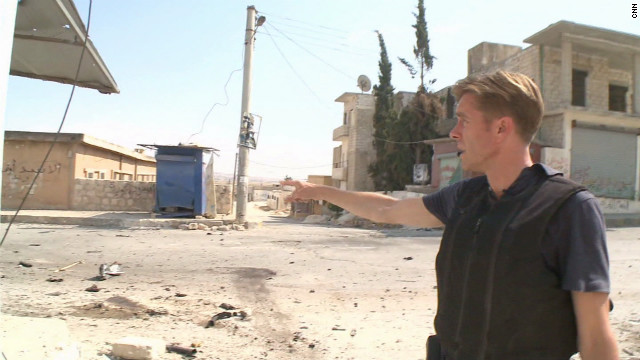 CNN's Ivan Watson reports from a battle-scarred Syrian town where the civilian population has fled.
July 27th, 2012
10:04 AM ET

CNN inside Syria: A bloody mess could get messier

As the months-long violence in Syria engulfs two key cities, Damascus and Aleppo, CNN's Ivan Watson has been traveling through villages in the area. He and the crew are some of the few international reporters in Syria, whose government has been restricting access on foreign journalists and refusing many of them entry. Check out more from CNN inside Syria.

Below is an edited Q&A about what Watson has seen and heard in rebel-controlled towns near Aleppo:

CNN: We're hearing that one community in Syria - the ethnic Kurds - are beginning to take matters into their own hands. They're breaking with the regime. What are you seeing? What are the signs that this could impact the entire conflict?

WATSON: It could definitely complicate matters. The Kurds make up about 10 percent of the population, long-oppressed, even denied citizenship by the al-Assad regime. But they've largely sat out this uprising for about the past 16, 17 months. In the last week, we've seen one of the strongest of the Kurdish political factions, which is closely affiliated with the Kurdistan Workers' Party or PKK, claiming control over a number of Kurdish communities.

Today, we drove through one of those Kurdish villages and went through a Kurdish/PKK checkpoint. They're armed guys with shotguns. They had the PKK flag. The trouble is, the PKK is the sworn enemy of Syria's neighbor to the north, Turkey. And Turkey's prime minister, Recep Tayyip Erdogan, issued a threat. He said that if what he considers a terrorist organization sets up mini-statelets along the Turkish border with Syria, then that could give cause for Turkey to intervene militarily into Syria and vastly complicate what is already a great big bloody mess.

CNN: From the rebels you're with and talked to, do they think this is going to be a long, drawn-out war, or do they see indications that there's been a tipping point and that the handwriting is on the wall, that it might take weeks, might take months, but for all practical purposes, they think they're going to win?

Depending on who you talk to, some are very optimistic, particularly after a big bomb went off in Damascus last week and killed four top security chiefs. But the inroads that the rebels made into the capital, Damascus, last week have kind of faded as a result of the very strong Syrian military counterattack.

And now I think the rebels see that Aleppo, the second city, the commercial city, is the linchpin. That's why they're throwing apparently all their manpower in the north of the country into the struggle for control of that city.

CNN: What have you seen in the villages around Aleppo?

WATSON: One town we've been in was utterly devoid of the civilian population. They've all fled. That town is totally battle-scarred. We saw at one point a helicopter circling overhead coming from the direction of Aleppo and definitely making fighters nervous as it circled overhead.

They don't really have the weaponry to battle Syrian government aircraft, though we were shown a surprising amount of heavy weaponry that the rebels have captured. Vehicles with mounted mortars that can shoot 120-millimeter rounds that also have anti-aircraft guns. One fighter claimed he'd shot down a helicopter a couple weeks ago, even captured armored personnel carriers.

These are not the rebels I saw four months ago. These guys now have much heavier weaponry. But unlike Libya, these guys don't go running around shooting their guns off in the air to show off. They don't have enough bullets to do it. They're saving it for the real battle.

With the rebels: Guns, mortars - and mansions