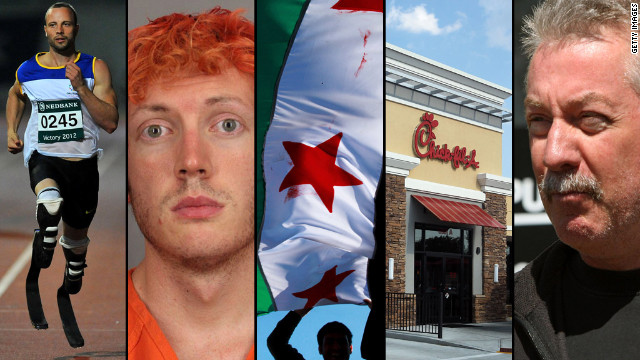 The first amputee to compete in Olympic track events will make his London 2012 debut on Saturday.

South Africa's Oscar Pistorius, whose legs were amputated below the knee when he was an infant because of a bone defect, will compete in the individual 400-meter run on Saturday before participating in South Africa's 4×400-meter relay squad later in the Games. HeĀ runs on blade-like carbon fiber prosthetics, from which his nickname "The Blade Runner" derives.

Pistorius' speed sparked a few years of debate over whether his prosthetics give him an advantage over able-bodied athletes. ButĀ Switzerland's Court of Arbitration for Sport ruledĀ that although the springy prosthetics gave Pistorius at least one advantage, Pistorius is at a net disadvantage because he has more Ā difficulty coming out of the blocks and accelerating during the first part of the race.

For more on the Olympics, including stories about China's quick start in the medal count, the ongoing rivalry between U.S. swimmers Ryan Lochte and Michael Phelps, the U.S. men's gymnastics team qualifying for Monday's all-around finals,Ā visitĀ our London 2012 page.

Why China will top the medal count

Suspect in Colorado theater shooting to be charged

A man accused of killing 12 people and wounding dozens of others in a July 20 shooting at a Colorado movie theater is expected to be charged in the case on Monday.

A judge also is expected to hear arguments Monday on a request by the defense team of suspect James Holmes for authorities to surrenderĀ a package he allegedly sent to a psychiatrist before the shooting.

Holmes is accused of shooting people who were watching the early morning premiere of "The Dark Knight Rises" in Aurora, Colorado. He was arrested outside the theater shortly after the shooting.

The school where the psychiatrist worksĀ said last week that it received the "suspicious package" on Monday, and it described as "inaccurate" a Fox News report citing a source who said the packaged was received July 12 and sat in the mail room.Ā CBS News reported that the package included a description of how Holmes was planning to kill people.

According to the request from Holmes' defense team, the package seized by authorities under a July 23 search warrant was a protected communication and should be handed over. Prosecutors are fighting the request.

Profiles of the 12 victims

How to help the victims of the Colorado shooting

A nine-day struggle for control of Syria's commercial hub of Aleppo looks to stretch into this week, with Syria's top diplomat vowing Sunday that rebel troops would not gain control of the nation's largest city.

About 200,000 people have fled shelling and heavy weapon fire in Aleppo and surrounding areas in the past two days of fighting, a U.N. official said Sunday, citing the International Committee of the Red Cross and the Syrian Arab Red Crescent. Tanks pounded Aleppo on Saturday, a sign that a much-feared government offensive in the critical city has started.

Meanwhile, the Arab League is backing the Syrian opposition's call forĀ an emergency U.N. Security Council meeting over fighting in Aleppo.Ā Officials from the regional body are planning visits to Russia and China as part of efforts to persuade those countries, which have vetoed several resolutions over Syria, to change their stance, the head of the Arab League said Sunday.

A Syrian uprising started in March 2011, after President Bashar al-Assad's regime cracked down on Ā protesters.

The U.S. Postal Service has said that without congressional action by Wednesday, it will - for the first time in its history - default on its annual paymentĀ covering retiree health care.

The service is required to prepay health care benefits for retirees, and it next payment, due Wednesday, is supposed to be $5.5 billion. The service and its workers' unions want Congress to repeal the prepayment mandate and stop service cuts and plant consolidations.

The Senate passedĀ legislation to help the Postal Service in April, but the House has yet to act. While default would be a first for the Postal Service, it's largely symbolic with few immediate implications. The service would prioritize bills, ensuring employees and subcontractors get paid, spokesman David Partenheimer said,Ā CNNMoney's Jennifer Liberto reported.

After two weeks of outrage and counteroutrage overĀ Chick-fil-Aās president saying he was against same-sex marriage, groups on both sides of the issue hope their supporters will make their positions known at Chick-fil-A restaurants across the country this week.

Former Arkansas Gov. and ex-presidential candidate Mike Huckabee has called for a "Chick-fil-A Appreciation Dayā on Wednesday. A Facebook page for the event calls for supporters of the fast-food chicken chain to simply show up and eat at one of the 1,600 Chick-fil-As nationwide.

Meanwhile, the Gay & Lesbian Alliance Against Defamation isĀ backingĀ a call for aĀ National Same-Sex Kiss DayĀ to be held at Chick-fil-A restaurants nationwide on Friday.

The controversy took flight in mid-July after Chick-fil-A President Dan Cathy gave an interview to the Biblical Recorder, on online journal for Baptists in North Carolina. In the July 2 story -Ā picked up by the Baptist Press on July 16Ā - Cathy affirmed that his company backs traditional marriage. After proponents of same-sex marriage expressed outrage at the comment, the chain emphasized that it treats every customer and employee with respect, "regardless of their belief, race, creed, sexual orientation or gender.ā

Drew Peterson trial gets under way

The murder trial of Drew Peterson, a Chicago-area police office accused of killing his third wife and is a suspect in the disappearance of his fourth, is scheduled to begin Tuesday.

Peterson, 58, is charged in the 2004 death of his third wife, Kathleen Savio, whose passing initially was ruled accidental after her body was found in a bathtub. She had been divorced from Peterson for about five months when she died, and Savio was to receive part of Peterson's pension and other support.

Just eight days after his divorce from Savio, Peterson married Stacy Cales, then 19.Ā After Stacy went missing in October 2007, her husband became the focus of a police investigation. Authorities exhumed Savio's body and conducted a second autopsy, this time ruling her death a homicide. Stacy Peterson still is missing.

The case was depicted in the Lifetime movie "Drew Peterson: Untouchable," which set a ratings record ofĀ 5.8 million viewersĀ for the channel when it premiered in January.

Get caught up on the Peterson case in 3 minutes

An Iranian couple has been given lengthy prison sentences after a video emerged of them dancing in a main square inātwitter.com/i/web/status/1ā¦6D
cnni

6:45 am ET February 2, 2023 RETWEET
Kylian MbappĆ© missed two penalties and an open goal in the space of 100 seconds before coming off injured in Parisātwitter.com/i/web/status/1ā¦mqO
cnni

6:00 am ET February 2, 2023 RETWEET
Israel carried out airstrikes in Gaza after intercepting a rocket attack from the coastal enclave, the Israel Defenātwitter.com/i/web/status/1ā¦3G
cnni

An Iranian couple has been given lengthy prison sentences after a video emerged of them dancing in a main square inātwitter.com/i/web/status/1ā¦6D
cnni

6:45 am ET February 2, 2023 RETWEET
Kylian MbappĆ© missed two penalties and an open goal in the space of 100 seconds before coming off injured in Parisātwitter.com/i/web/status/1ā¦mqO
cnni

6:00 am ET February 2, 2023 RETWEET
Israel carried out airstrikes in Gaza after intercepting a rocket attack from the coastal enclave, the Israel Defenātwitter.com/i/web/status/1ā¦3G
cnni

The Fed raises interest rates for the eighth time in a year, but slows its pace to a quarter of a point in a nod toātwitter.com/i/web/status/1ā¦eK
cnnbrk

2:05 pm ET February 1, 2023 RETWEET
The FBI searches President Biden's home in Rehoboth Beach, Delaware, as part of the investigation into his handlingātwitter.com/i/web/status/1ā¦jH
cnnbrk

8:36 am ET February 1, 2023 RETWEET
Several suspects arrested over suicide bomb blast at a mosque in Pakistan that killed more than 100 people, authoriātwitter.com/i/web/status/1ā¦QR
cnnbrk