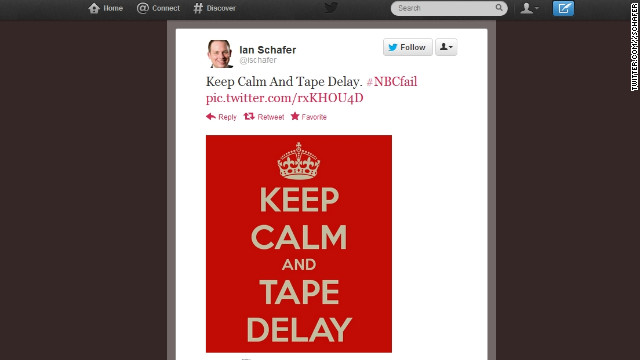 As a wired (and wireless) society, nowÂ even more so than during the 2008 Beijing Olympics, the tactic of using a tape delay to save the best events for nighttime viewers - also the most lucrative audience for NBC - has become harder to pull off.

Yes, NBC is airing all the events live online if you have a cable provider. But if you miss that showing, log on to Facebook, check your favorite news site or heaven forbid check social media, you're bound to catch a spoiler. Mostly, that's because NBC does not show many marquee events until about five hours after they've happened. Â (We should note this debate occurs regularly when East Coast viewers spoil finales or award shows for the West Coast.)

In the minds of a growing number of digital users, the Olympics have been a big #NBCfail.Â And folks online are making sure NBC knows how they feel.

Saturday night's lineup, which included the heavily spoiled,Â  top-billed men's 400-meter individual medley pitting Michael Phelps head-to-head with Ryan Lochte, pulled in an average of 28.7 million viewers, according to Nielsen, the highest ever for the first night of Olympic competition.

So, are Americans tuning in because it's the way most want to see the Olympics? Os it because viewers may already know the results, but they want to see how it all unfolds? Or maybe it'sÂ because they already set the DVR on the way out the door? Or maybe they still want to see the packaged deal with all-inclusive profiles about the Olympians that makes our (OK, at least my) eyes well up with tears?

"Not everyone is online all the time all day long. For those people, a nicely curated, best-of package at night is awesome. Even for those of us that are online, it's still pretty cool to see how things happen. Sports are better seen than read," Jay Yarow wrote on Â Business Insider. "For the rest of you, it's live-streamed online. Go nuts watching it. There is nothing stopping you."

But in a world of DVRs, where users are accustomed to being in control, both sides bring up interesting points. And withÂ NBC locking down the Olympics contract for the near future at least, it surely will lead to further discussion about how live events should be aired at subsequent Games. That's not just for the Olympics but also other major sporting events and awards shows.

Meanwhile, for nowÂ #NBCfail is stillÂ going strong. And while the network seems happy with Olympic viewership, it also isn't ignoring the loud chatter.

In response to the complaints, the executive producer for NBC's Olympic coverage waded into the deep end of the Twitter pool to assuage the angry masses. Â Jim Bell tried to tell people when they could catch live events online to avoid spoilers and also even took a suggestion from a viewer after the nightly news spoiler.

8:24 am ET January 31, 2023 RETWEET
Last week the grim extent of the outages was laid bare when South Africans were advised to bury dead loved ones witâ€twitter.com/i/web/status/1â€¦LE
cnni

7:43 am ET January 31, 2023 RETWEET
Michael Jackson will be portrayed by his 26-year-old nephew, Jaafar, in a movie biopic about the late pop star, stuâ€twitter.com/i/web/status/1â€¦g6
cnni

8:24 am ET January 31, 2023 RETWEET
Last week the grim extent of the outages was laid bare when South Africans were advised to bury dead loved ones witâ€twitter.com/i/web/status/1â€¦LE
cnni

7:43 am ET January 31, 2023 RETWEET
Michael Jackson will be portrayed by his 26-year-old nephew, Jaafar, in a movie biopic about the late pop star, stuâ€twitter.com/i/web/status/1â€¦g6
cnni