Tom Teves doesn't want his son Alex's legacy to be defined by a gunman. When the Aurora, Colorado, theater-shooting suspect first appeared in court last week, Teves was there. Teves blames news outlets, including CNN, for playing a role in perpetuating mass shootings.

You make him out to be a madman. He knew he was going to be on television. These guys are playing you like fiddles. Either you're not that bright - I used a better word than I was thinking of - or you don't care and you're using it to sell advertising, and then you're the worst thing on the face of the Earth.

I see your Olympic flame and raise you a lightning bolt

Some folks in London have complained that they can't see the Olympic flame from outside the Olympic Stadium. There's a natural remedy for that.

There's a hubbub online about NBC's coverage of the London Olympics, and other media's habit of sending out spoilers before the prime time broadcast.

The American people are missing a great Olympics thanks to NBC's coverage. What's all this about the "digital age"? Radio has been around for decades; the Internet (without tweeting and social media) for two-plus decades. One has to be an ostrich not to know who won the Phelps/Lochte race before it appeared on NBC's evening coverage. It's just not that interesting once you know how it comes out. Would you not broadcast the Kentucky Derby live and save it for evening prime time? The suspense is gone. Without it, the race is a two-minute rehash of a bunch of galloping horses.

Most viewers are oblivious to the fact that the Games are delayed, and they do not care. These viewers are casual fans who will eat up whatever narrative is delivered to them. If you take time to post here, you are not a casual viewer and are a minority and lower priority to NBC's ratings guys. (I am assuming this is NBC's reasoning.) 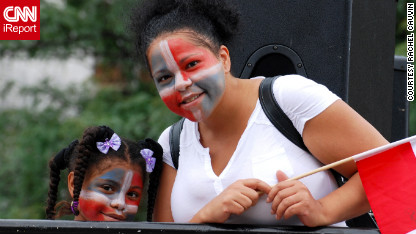 CNN iReporter Rachel Cauvin of New York brought her camera along to capture the vibrant faces, high spirits and elaborate costumes of the Dominican Day Parade on Sunday in the Bronx. Dominicans "are very proud of their culture," Cauvin told CNN. "They love to show it through their music - merengue and bachata - as well as their food."

It's kind of a tough way to get a season pass at Six Flags, but a dozen patrons earned theirs Sunday when the Vallejo, California, park's newest ride left them stranded 150 feet in the air for two hours, CNN affiliate KGO reports. Wait till you see how they got down.

On the horizon: Romney in Poland; Peterson trial opens

Republican presidential hopeful Mitt Romney will visit Poland, the last stop on his three-nation international tour. Romney has made headlines with remarks at each stop along the way.

Opening statements are scheduled in the murder trial of former Illinois police sergeant Drew Peterson. Peterson, 58, is charged in the 2004 death of his third wife, Kathleen Savio. He also remains under investigation in the October 2007 disappearance of fourth wife, Stacy Peterson.