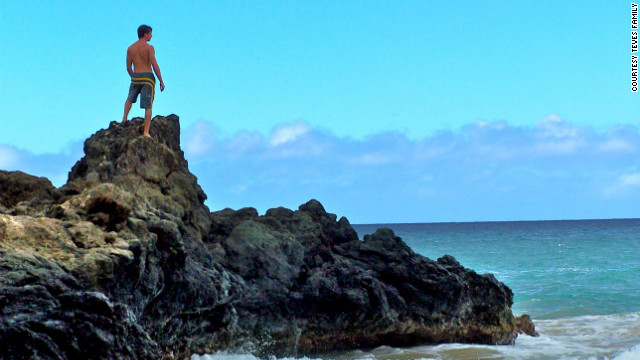 Overheard on CNN.com: 'It's time America takes a stand against evil'

Family and faith got readers talking over the weekend. Here are five of the conversations we noticed on Monday as we wandered in to work.

Alex Teves died shielding his girlfriend from the rain of bullets during the Aurora, Colorado, theater shooting. His father, Tom Teves, wants the media to stop naming and showing images of the gunmen in mass murders. His "Alex Teves challenge" has gotten a powerful response from readers.

Look to the good in humankind - look to heroes, says grieving father

One reader compared the image above to a powerful painting.

lxNay: "That image above, with Alex gazing at the ocean, is exactly like work by the German artist Caspar David Friedrich. In particular, 'Wanderer Above the Sea of Fog.' That is quite a profound image, breathtaking actually. When I think of Friedrich's work, I imagine a solitary man contemplating his destiny and future. I wonder if that is what Alex was doing? What a loss. My thoughts are with the family and families."

Many people shared condolences and said they wanted to take the challenge.

null: "Mr. And Mrs. Teves, As the parent of a young man who, like Alex, is also a bright light in what often appears to be a dim world, I cannot comprehend your loss. While it may be only a small consolation, I want you to know that I have accepted the Alex Teves Challenge. As a film producer, I have, ashamedly, played my role in glorifying villainy during my career. I have known for some time that the age-old story of good vs.evil can be told in a manner that raises the consciousness of the viewer to the role of the hero, rather than degenerate it to the level of the villain. It is my vow to use this litmus test on every project I green light in the future. May you find peace in your heart during these difficult days ..."

Zanmarie: "The people of Ahwatukee, and Alex's parents knew they had an exceptional son. They were wise enough to notice Alex and begin to truly value him when he was alive. I, as an ordinary citizen and media watcher, will take up my part of the challenge. To spread the word about the good people, the kind people, the nice people, in our midst, rather than focus any more of my attention on the negative persons who DO dominate our news coverage. It is not just a challenge for the media, it is a challenge for us, the public. Can we, collectively, turn our heads and hearts away from the 'bad' influences that will always be around in our world ... or can we turn our collective attention toward the good and wonderful people whom we usually overlook. Long remember a real hero ... Alex Teves."

Dinka: "What a good person. His family should always be proud of this person who they gave to the world and the message they are inspiring because of him. They are absolutely right that, as a society, we need to stop giving so much attention to the murderer and start crediting the good people who deserve that their memory be honored."

O.J. Murdock, who signed with the NFL's Tennessee Titans last year, killed himself Monday morning in front of the Tampa, Florida, high school where he was a track and football star, police said. Our readers shared many experiences and said they, too, could relate.

Sir Toom: "He was my age and attended USC while I was there (two years he was there). I'm sorry to hear this. I could not imagine ever reaching this point. But you never know what someone has been through unless you have walked through their shoes and have those experiences and feelings. RIP."

Ken Smith: "Godspeed this young man. I have lost friends to depression and suicide. If you know someone is depressed, do your best to see they get help. Talk to them. Sometimes only one world from someone who cares can make the difference. All respect to family and friends. Sending prayers for strength."

Glades2: "As a hospital volunteer I once knew a teen who could no longer play high school football due to a spinal injury received during a game, and after a few months in the hospital he related some of his despair to me one evening, so this does happen, especially to someone who's physically fit and suddenly finds their body can no longer perform the way it once did. I'm very sorry to hear of this ..."

Amitai Etzioni wrote an article asking if having children makes couples less happy, or if there is something else at work.

Does having kids make you less happy?

The story led to an interesting thread about people who opt not to have children.

Jenandjoan Jonsson: "I would never presume to tell anyone else what to do. For myself, though, I just don't want children. Ever. At all."

SZeidler: "Alejandro Arango brings up an interesting point. Can people without children ever understand where parents are coming from? Or is the experience too unique?"

tattooo: "SZeidler, the point is that I don't WANT to experience what it is that parents go through. I don't like kids. I have this feeling that most parents who want me to 'experience' what it is they're going through have the kids I like the LEAST. I don't see a point as to why we who do not have kids need to support your kids via taxes, deal with them in public situations when they're losing their minds, or have to censor ourselves because you decided to bring your genetic xerox out in public. I don't want kids. I don't need to share in your experience of having them. I'll take the $250,000 Porsche and all the 'meaningless' fun I can have in it over having a kid any day of the week."

Many readers wanted to talk about religion. One of the involved stories was about a couple who wanted to get married, but had to move their plans because of their race. Charles and Te'Andrea Wilson had planned to marry this month at the First Baptist Church of Crystal Springs in Mississippi, but were asked at the last minute to change the venue of their wedding.

Readers were almost universally outraged by this story.

Katherine Licari Venturoso: "My question is, why didn't the pastor ignore these racist people? They were not invited to the wedding anyway. He wasn't very courageous and is not a good role model. He should resign. He didn't do his job."

tipsana: "I am surprised this couple would still wish to be married by a pastor who did not have the integrity to tell the racist members 'No!' in a thundering voice. Really, everything about this situation stuns me."

Mitzy1991: "The sad truth is churches can do whatevertheheck they want to do. Why are you surprised about a church excluding people? Churches exclude people all the time! You think this is the only racist church on the planet??? Churches are racist, sexist, homophobic and everything in between. It's horrible what people do to each other in this country in the name of God."

Johan Huibers, a wealthy businessman, has built a replica of the biblical vessel known as Noah's Ark to the dimensions specified in the book of Genesis. The finished craft has just been opened to the public on the Merwede River in the Dutch town of Dordrecht. This certainly got readers talking.

Readers differed in their opinions.

kylepr: "Because Christ would have wanted him to waste millions of dollars building a boat from a story that is scientifically impossible to have happened, instead of using that money to feed and clothe the poor. Love how Christians completely miss the teachings of Jesus.

adinfinitum7: "It is a shame that so many people criticize this guy. It was a neat project no matter what your position on the Bible. Being human is about doing different things."

ReHorakhty: "Why is it amazing? He deserves to be criticized. He is profiteering, not being charitable. See it for what it is."

Malfean: "I've often thought that while the ark was probably very real, the context in which it was built could have been misconstrued over the centuries. Keep in mind that the story of Noah predates all religious text, and is spoken of in the Epic of Gilgamesh. That spoke of a man who survived the mother of all floods and from the north. Perhaps Noah was a man who had farm animals and stuff near to the Black Sea, in Northern Turkey. Perhaps, one day, thousands of years ago either God or someone spoke to him about a flood coming, (perhaps he just noticed the shoreline changing over a few days or months, etc.). The collapse of the Bosphorus, which resulted in a net loss of 5 feet across the entire Mediterranean Sea, went into the Black Sea and that had been until that point, a fresh water sea. It could be possible that this is where the story came from. Perhaps the two of every animal simply meant two of every animal HE owned, along with family and provisions to ride out what would have looked at that time to be a global flood? Just a thought. ..."