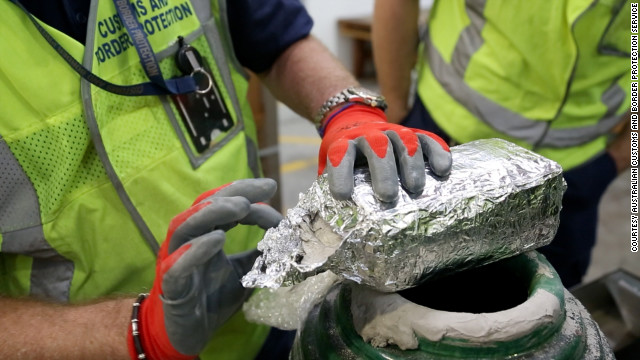 Australian police seize $526 million worth of meth and heroin

Australian police say they have busted a major drug ring after seizing a record haul of methamphetamine and heroin worth $526 million (500 million Australian dollars) that was stuffed into terra cotta pots.

More than 674 pounds of crystal methamphetamine and 555 pounds of heroin were seized as part of an operation that began a year ago when the U.S. Drug Enforcement Administration tipped off officials that an international crime syndicate was planning to import drugs to Australia. Police targeted two massive cargo containers containing 3,200 terra cotta pots coming from Thailand.

X-rays of the containers showed what was probably drugs heavily packed into 100 pots, officials said Tuesday in Australia.

The pots were sealed with a putty-like substance to conceal the drugs, officials said.

"The actual concealment itself wasn't particularly sophisticated: terra cotta pots concealed in bulk on pallets within cardboard boxes and then shrink-wrapped," said Mike Pezzullo of the Australian Customs and Border Protection Service.

Officials from the two investigating agencies in Australia said it was the largest seizure of methamphetamine in the country's history and the third largest of heroin.

Australian Federal Police Deputy Commissioner of Operations Andrew Colvin said that through the course of the investigation, authorities kept close watch on suspects as they tracked the shipment.

Four suspects from Hong Kong and three Australians were arrested as part of the operation, the Australian Federal Police and Australian Customs and Border Protection Service announced. The men face a maximum penalty of life in prison on charges of possession or attempting to possess commercial quantities of methamphetamine or heroin.

“This operation follows the AFP’s most successful year in terms of drug seizures," Colvin said in a news release. “In the 2011/12 financial year, the AFP and its partner agencies seized almost 14 tons of illicit substances bound for drug distribution networks across Australia."

Colvin said that was in large part due to the collaboration between international intelligence groups.