CNN tech reporter John D. Sutter writes, "Wasn't this supposed to be the 'Twitter Olympics,' where everyone rejoiced in the digital-era magic of hearing directly from the world's best athletes and scrolling through a global, real-time conversation about what must be the planet's most 'Kumbaya'-like sporting event?"

Well, yes. But things don't always go as planned, as evidenced by some athletes' questionable tweets and the groundswell of digital criticism for NBC's coverage of the Games.

CNN readers have at least as many opinions about Twitter as they have about the Games.

Twitter is not one of those things that makes the world a better place.¬Ý Knowing people's knee-jerk reactions to things is not news, or even interesting.

It may not make the world a better place but it puts a real face on the world. People are just not as nice as they pretend to be.

It's the thing the younger generation does not get....yet.¬Ý They are eons ahead of us old timers with the technology...no 2 ways about it.¬Ý But they don't yet understand the ramifications of the technology. Nothing happens in a vacuum. There are consequences for not understanding the public nature of all this technology. It's one thing to know how to drive a car.......quite another to understand "the rules of the road" however. 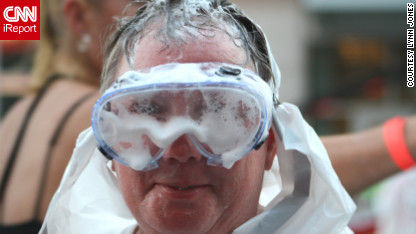 CNN iReporter Lynn Jones got pied herself at a big cream pie fight in Dallas.

During a bid to break the Guinness World Record for the largest shaving cream pie fight, CNN iReporter Lynn Jones joined more than 700 people in Dallas plastered in globs of shaving cream. Describing it as a chaotic, fun and party atmosphere, she says it was a thrilling event that she didn't want to miss.

"It was so much fun, and I would do this again in a heartbeat," she says. "One guy at one point said I didn't have enough shaving cream on me, so his pie went on the top of my head. I was laughing the entire time."

The truth is out there

Mysterious crop circles have appeared in a wheat field near Wilbur, Washington. CNN affiliate KXLY goes all X-Files on the story.

A 15-year-old basketball player in Mount Juliet, Tennessee, is the youngest breast cancer patient ever treated at Vanderbilt University Medical Center, CNN affiliate WKRN reports. Ashley Roby was just 14 when she was diagnosed, and in February she underwent a bilateral mastectomy, with her family and her boyfriend, Jaelin, by her side. Since her operation, Ashley's scans have shown no need for additional radiation or chemotherapy. However, it the midst of it all, Ashley has had to deal with another tragedy.

Eclectic author Gore Vidal died Tuesday night at 86, leaving behind a body of work that chronicled American culture with a clear and often critical eye. Throughout his life, Vidal didn't shy away from controversy - either actively courting it or inviting it through his acerbic one-liners.

I've had hard targets in my lifetime, I've taken on general superstitions, but that's what writers do. So I certainly, wouldn't have changed my modus vivendi one bit.

A day after announcing that its sales fell from the same period last year, General Motors will report its second quarter financial results Thursday.

1945 - The Potsdam Conference between the leaders of the U.S., the Soviet Union and Britain ends with an agreement on a plan for postwar Europe.

1974 - Former Nixon White House counsel John Dean is sentenced to one to four years in prison after pleading guilty to obstruction of justice in the Watergate scandal. 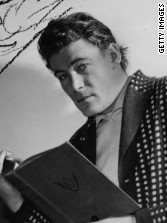 Two Japanese sisters have been confirmed as the world's oldest living identical twins and the oldest ever identical‚Ätwitter.com/i/web/status/1‚Ä¶4H
cnni

10:01 pm ET September 25, 2021 RETWEET
Australia has lost about 30% of its koalas over the past three years, with the marsupials hit by drought, bushfires‚Ätwitter.com/i/web/status/1‚Ä¶VF
cnni

8:31 pm ET September 25, 2021 RETWEET
"The Wire" creator David Simon says he won't be filming an upcoming HBO series in Texas due to a controversial abor‚Ätwitter.com/i/web/status/1‚Ä¶vP
cnni