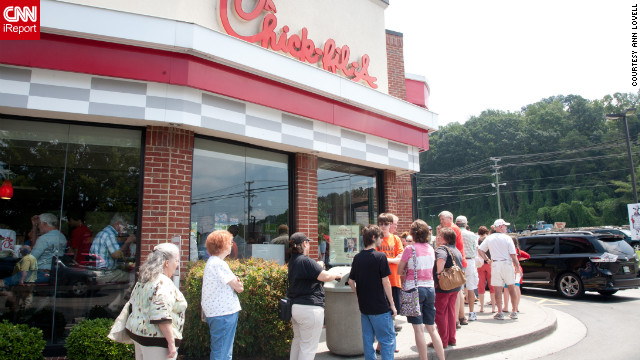 Editor's note: You may be familiar with the Overheard on CNN.com series, which looks at thought-provoking conversations posted by the community. In that same vein, we're trying something new by providing a look at some of the most talked-about stories of the day.

If you're hungry for debate, you might want to feast on these discussions. Below is a menu of five talked-about topics today. We may be hearing more about Chick-fil-A on Friday, so consider grabbing a doggie bag.

We’re looking back on Wednesday's Chick-fil-A Appreciation Day crowds and forward to planned events Friday in support of same-sex marriage.

On Thursday we've seen a bit of talk bubbling up about corporate image and the way companies and public figures use their words to cultivate their following. We also have seen commenters debating public displays of affection, both same-sex and otherwise.

Mike: "Ever notice how no one wants to be put in a box these days ... as if what they say doesn't define them ... and yet when it comes to Chick-fil-A, the most innocuous kind of "this is what I belive statement" put a box around not only (Chick-fil-A President Dan Cathy), but the whole business and all of its employees and suppliers, some of whom I'm sure believe otherwise."

To what degree can one's actions affect anything?

ec: "It's impossible to boycott gas in most cities, thanks to oil companies getting rid of public transit and preventing investment in alternative fuels. What these people do is vote and support investment in alternative fuel, carpool, ride their bikes instead of drive when possible, grow their own food, etc. It's impossible to boycott every company that should be boycotted, but we do what we can. Our country is run by corporations, tell them how you feel by voting with your wallet."

Darth Cheney:  "I like Chick-Fil-A. I support gay marriage. OMG, I don't fit into either pre-ordained pigeonhole in the Hate-olympics! My head is going to explode. I don't conform to my force-fed narrative!!!"

Readers also talked about kissing in public, for protesting or otherwise.

LM Shed: "A kiss protest? Are they gay or 14 years old? You are not helping your cause by continuing to push your beliefs on others. Pushing against someone causes them to push back. I don't want to see heterosexual couples kissing in public either. Educate people in a mature fashion; don't act like a bunch of bullying teenagers. Perhaps people will listen to you when you act like a respectable adult instead of a whiny child who's not getting their way."

nightmarez78: "If a man wants to marry a man, or a woman wants to marry a woman, go for it. All the power to you, but it can't be defined as a marriage. You can have all the same benefits, but call it something else and then you won't have as much backlash from people."

This reader was not a fan of the food.

PJL500: "The hate and bigotry aside, why would anyone eat this disgusting frankenfood?"

CNN's Emanuella Grinberg published a story on Thursday talking about strange chicken moments and readers' many takes on the flap. She included reader comments as well as stories from iReporters.

Chicken, with a side of politics

If that wasn't enough, more comments are shown in the Mash-up. If you see a related event going on near you, we'd love for you to send an iReport. You can send us your photos or video, or just click through some of the stories already submitted.

The conversation was split between those not wanting to deport the so-called "tamale lady" and the others who believe that even though people are sometimes in difficult situations, it is necessary to enforce immigration laws.

Timothy Montalbo: "I know this lady. She used to drive all the way up from San Diego to Oceanside selling her tamales. She always drove by my apartment on Fridays. She would send up her daughter to ask me if I wanted to buy a pack, she was a sweet little girl. I always bought a pack of her yummy tamales. They were so tasty. No matter how bad my week was, those yummy tamales always made my day better. I almost cried seeing her picture on this article. I never even thought to ask her name. That lady was a morale booster for my community and it breaks my heart to hear that she has to endure this kind of abuse."

topaz75: "I am a LEGAL immigrant to this great country, and I know how time-consuming, expensive and at times frustrating the legal process to become a citizen here is. I am three years into it, and still have about two to go before I get the blue passport. As such, it severely annoys me to see people take the easy way out, come here illegally and then expect to be granted the same rights citizen and legal immigrants have. And it is infuriating when people like Mr. Navarrette seem to think that is the right way to do it. It is NOT."

nil00: "Can she teach me how to make tamales before she leaves so I can open a taco truck?"

Nearly 3,000 comments looked at Colorado shooting suspect James Holmes’ mental state after news that he had a history of mental health issues. Readers wonder what, if anything, should and could be done to identify at-risk people.

ActivistJudg: "Are we ever going to get to a point in our society where freaks and nutjobs can be confronted BEFORE they go crazy and kill people? Everyone always claims to have seen red flags when we're discussing recent psychopaths, but it seems like no one ever does anything to address the problems prior to a massacre."

Displacedmic: "Of course the other side of the coin is that we don't generally hear about the success stories now do we? 'Man goes crazy and shoots 20 people while dressed like Scooby Doo.' 'Man goes crazy but talks to someone, get the helps he needs and is now recovering nicely.' Which one do you see in the papers?"

Readers also responded strongly to the story of a man whose life will never be the same.

Nick Rhoades has been living a nightmare after a one-time sexual encounter with another Iowa man, Adam Plendl. He was convicted of transmitting AIDS in the 2008 encounter: criminal transmission of HIV is a class B felony in Iowa. Rhoades went to jail and is now on probation, even though Plendl says hospital tests confirmed he was not infected with HIV. Rhoades is fighting his conviction and says his life is forever changed; he’s not allowed to be alone with a niece or nephew or any child. Readers were strongly divided on whether Rhoades’ situation warrants the label of criminality.

Imprisoned over HIV: One man's story

Worldwalker: "So a guy who has never shown any interest whatsoever in sex with children is prohibited from being with his own nieces and nephews (alone) because he might molest them. He can't hold many jobs, he can't live in a lot of towns, etc., because ... he might have (but didn't) transmit a disease. This is JUSTICE?"

On a much lighter note, issues related to Facebook got many readers riled up.

Jessica Ravitz’s piece about Facebook’s suckier moments drew passionate responses. Ravitz wrote about feeling sad after accidentally seeing photos of her ex-fiance's current relationship, and received many comments saying she was taking it too hard and should just move on.

Therewolf: "Facebook isn't the problem. Facebook just made it easier for you to see how fragile you really are."

lynee: "What a self-absorbed article. Have I been kicked in the gut by Facebook? Sure – it's how I found out that my ex was cheating on me for the entire two years of our relationship. Does that make me want to cry about the social injustice of Facebook? Of course not. If your ego is so delicate, you probably ought to delete your account. Seriously, this whole "article" reeks of #FirstWorldProblems."

Jack Deal: "Please spare us the grief and grow up ... if you can't take the heat, don't log on. 'Life's challenges' over not seeing a fiance one has not spoken to in four years? What a crock ... it's called reverse Schadenfreude and blaming the messenger. ..."

Readers often talk about the problems of social media and the need to experience real life and even go outside sometimes.

Anonymousett: "The demise of Facebook is long overdue. Unfortunately, there are still some individuals who feel the need to tell us every boring detail of their self-absorbed, mind numbing lives as if they were just so important. There are now clinics and classes that separate you from Fakebook and your real life. This site does nothing but cause pain and anguish and is really not good for us as a society. Who are your real friends?"

gremlinus: "I respectfully disagree. I'm able to keep more in touch with my close friends that have moved away for work. I have reconnected to old high school friends that I had lost contact with. Now we talk and meet in real life as well. As I've gotten older all of us have spread across the world. I have relatives who live very far away. My brother lives halfway across the country and he can't travel easily with his kids. But we can keep in touch and I can see pictures of his family. I keep involved with some of the more social things in my field. Facebook is what you make of it. Yes there are people who post every five minutes, but those are your friends not mine. Maybe you should instead look at your life and wonder why you are friends with so many mindless posters. ..."

Anonymousett: "Sorry, you are mistaken. I have grown past that nonsense. I have a phone and e-mail and actual social interaction with live people in person. Enjoy the sunshine."

Our readers say they have no hesitation about filtering these people away. One person calls Facebook the new honor roll bumper sticker.

JQP1172: "Despise Facebook. I've seen various posts, it is either drivel as in 'looking fwd to the weekend,' 'did my laundry, check ... now time to relax,' etc. or it is a place for people insecure with their own lives to post personal info to ALL their Facebook friends to make themselves feel better. My take is, the important people in my life already know the important events in my life, as for everyone else well they don't need to know. Facebook has become the new 'My kid is on the honor roll' bumper sticker."

Teralikes Ipmal: "I've got a great solution to FB envy, it's called 'don't show updates from this user' in my news feed. I've got plenty of people on my list for event invite purposes who are Drama Queens (and Kings) and I just filter them."

Michael Rush: "Other people's Facebook updates inspire me more than depress me. It is about how you process that information. Also, you can't have it all and just accept that and you'll be better off."