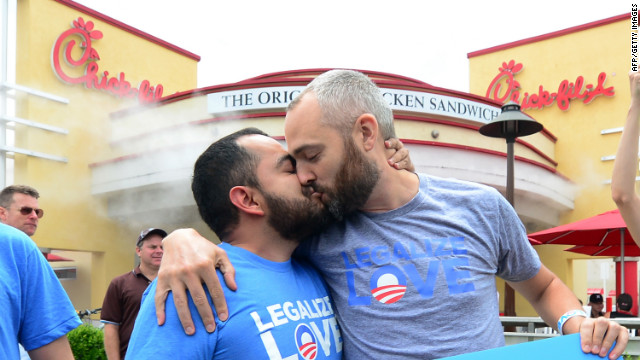 Eduardo Cisneros, left, and Luke Montgomery kiss in front of a Chick-fil-A in Hollywood on Friday.
August 3rd, 2012
08:47 PM ET

Comments: What does 'free speech' mean to you? Chick-fil-A debate strikes nerve

Editor's note: You may be familiar with the Overheard on CNN.com series, which looks at thought-provoking conversations posted by the community. In that same vein, we're trying something new by providing a look at some of the most talked-about stories of the day.

Happy Friday. We're taking a look at five of the most talked-about stories yet again. The topics are pretty diverse:

Scroll down to read what people are saying about the news.

There’s a lot of heated discussion about the “kiss day” demonstration against Chick-fil-A, which follows up on Chick-fil-A Appreciation Day. Will it have political impact come November? Does it matter what a corporation supports?

Most of our readers are once again expressing support for Chick-fil-A, including many gay readers. Check out iReporter Matt Zieminski's take on political gray areas. He is a young gay man with some very nuanced beliefs that have gotten a good response from our readers.

CVNeutron: "Whether you read this as a liberal or a conservative, LGBT or straight, Christian or atheist or any other religious belief, I want you to take from this a very simple message: We are all Americans and we all care about the same things. We all want equality, we just don't yet know the right way to achieve it. I am gay and I can tell you without a doubt I fully support those like me as well as those completely different from me because that's what makes our country better than most. We can disagree online and in person and on air as much as we want and at the end of the day nobody is hung for what they said and we all still can be united as people. This country faces serious issues and it's time that we get serious answers. I don't give a damn what Chick-Fil-A or The Home Depot or Gap or any other corporation thinks about gays. I care what my leaders think about equality. It's time to stop dancing around the issue and ask our leaders to give us real cohesive answers to this question: When? When will we have true equality in this country?"

Meanwhile, Thursday's piece on chicken with a side of politics garnered more than 5,000 comments. If you see Chick-fil-A demonstrations in your area, share your story on CNN iReport. END_OF_DOCUMENT_TOKEN_TO_BE_REPLACED

A U.N. General Assembly resolution approved Friday stresses "grave concern" over the deteriorating conflict in Syria and slams the government for its actions and the Security Council for its "failure" to counter the crisis.

The assembly adopted the Saudi-sponsored resolution 133-12 with 31 abstentions. It comes a day after Kofi Annan announced his resignation as the U.N. and Arab League special envoy to Syria. He championed a six-point peace plan that has failed to take hold.

The resolution notes "human rights abuses by armed opposition groups" and condemns "all violence, irrespective of where it comes from, including terrorist acts." But most of its ire is reserved for Bashar al-Assad's regime.

Tropical Storm Ernesto enters Caribbean, could be hurricane in days

Tropical Storm Ernesto hit parts of the Windward Islands on Friday morning, bringing rain and occasionally robust gusts as forecasters predicted it could become a hurricane in the central Caribbean Sea by the end of the weekend.

The storm’s center passed over or nearly over St. Lucia in the eastern Caribbean and was about 90 miles west of the island shortly before 11 a.m. ET, the U.S. National Hurricane Center said.

Ernesto - with maximum sustained winds of 50 mph and faster gusts - was moving west at about 21 mph.

END_OF_DOCUMENT_TOKEN_TO_BE_REPLACED

Hiring picks up, but unemployment rises

Businesses stepped up their hiring in July, but the unemployment rate ticked higher anyway.

Employers said they added 163,000 jobs in the month, according to a Labor Department report released Friday, much better than the 95,000 jobs economists had forecast.

But at the same time, the unemployment rate unexpectedly rose to 8.3% as households claimed they lost 195,000 jobs.

The government's monthly jobs report comes from two separate surveys: one that looks at company payrolls, and the other that questions households. Those two reports went in opposite directions in July, confusing the overall reading on the job market.

According to the employer survey, the public sector continues to be a drag on overall hiring. The government cut 9,000 jobs in the month, while private businesses added 172,000 jobs.

A British court Friday convicted the parents of a 17-year-old girl, saying she was killed because of her Westernized lifestyle, a spokeswoman for the Chester Crown court said.

Iftikhar and Farzana Ahmed were found guilty of murder in the death of Shafilea Ahmed, whose dismembered body was found on a riverbank months after she disappeared in 2003.

The conviction came after the girl's mother changed her long-standing denials and testified Monday that she had seen her husband attack their daughter on the night Shafilea died. Iftikhar Ahmed has denied killing her.

Prisoner with suspected case of Ebola escapes from hospital in Uganda

One of five prisoners receiving treatment for a suspected case of Ebola virus in Uganda escaped overnight Friday from the hospital at the center of the outbreak, a health official said.

"Should his results come back and he is positive, that causes us a lot of worry. So right now, we have resolved that the remaining prisoners will be cuffed on the beds for fear that they might also escape," said Dr. Jackson Amune, commissioner at the Ministry of Health.

The five inmates from Kibaale prison are among 30 people at Kagadi hospital with suspected cases of the virus. Two additional patients have confirmed cases, according to Doctors Without Borders.

10:00 am ET - Cal Ripken talks mother's kidnapping - Baseball Hall of Famer Cal Ripken will hold a briefing with reporters regarding the investigation into the abduction of his mother last month.

END_OF_DOCUMENT_TOKEN_TO_BE_REPLACED

Boxer Floyd Mayweather Jr. has been released from a Las Vegas detention center after serving two months of a three-month sentence for a domestic violence conviction, a detention center official said early Friday.

The official from the Clark County Detention Center said Mayweather was no longer in custody. No explanation of why Mayweather was released before the end of his sentence was given.

The undefeated boxer was convicted last year after the police said he punched the mother of his children at his home.

The U.N. General Assembly will convene over the Syrian crisis Friday, a day after Kofi Annan quit as special envoy to the nation following months of failed attempts to stop the bloodshed.

Annan, a former U.N. chief, has scrambled to forge peace amid reports of surging violence across the country.

A 10-year-old was among two people killed in Hama early Friday due to "indiscriminate shelling," the opposition Local Coordination Committees of Syria said.

The LCC described a "massacre' Thursday in Hama, where at least 50 people were killed by the regime's heavy shelling and gunfire, the opposition network said.

Across the country, at least 130 people were killed Thursday, the opposition Local Coordination Committees of Syria said.

And the worst violence may be yet to come.

Officials believe the "main battle" is about to begin in the biggest city of Aleppo, the U.N. peacekeeping chief said Thursday.

Gay rights activists plan a "kiss day" at Chick-fil-A outlets nationwide Friday amid a controversy over a company official's stance against same-sex marriages.

Organizers used social media to urge same-sex couples to participate in the event and post pictures and videos online.

The latest campaign follows a Wednesday event dubbed "Chick-fil-A Appreciation Day" in which Americans lined up at eateries nationwide to support the company.

Chick-fil-A said it set a sales record Wednesday, but declined to release the numbers.

"We can confirm reports that it was a record-setting day," said Steve Robinson, the executive vice president of marketing.

The controversy started after an interview with the fast-food restaurant chain's president, Dan Cathy, appeared in The Baptist Press on July 16. He weighed in with his views on family.

Two tropical cyclones have made landfall in eastern China, dumping heavy rain on coastal areas as the Philippines and Taiwan assessed the damage that one of the storms had left in its wake.

Tropical Storm Saola plowed into the Chinese province of Fujian on Friday morning, after the torrential rain and heavy wind it brought to parts of the Philippines and Taiwan had left more than 40 people dead.

Saola's winds were at typhoon strength when it hit Taiwan on Thursday morning, similar to the power of a Category 2 hurricane in the Atlantic.