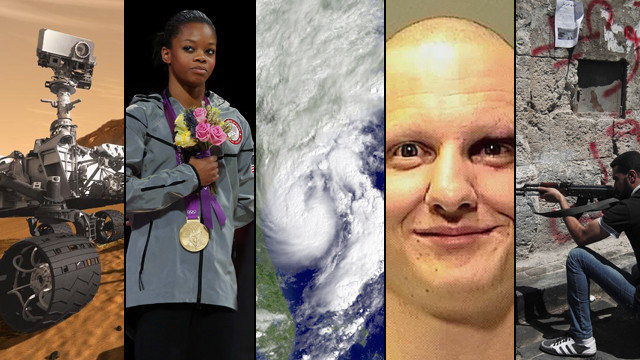 With just hours to go, the viability of a highly anticipated mission to Mars comes down to a critical seven minutes, when the Curiosity rover attempts to make a difficult and unprecedented landing.

NASAâ€™s $2.5 billion rover, which scientists hope will let them finally understand whether Mars does or could ever have sustained life, is scheduled to land at 1:31 a.m. ET Monday. Because scientists elected to land the car-size rover in tricky spotÂ -Â a mountain-containing crater that experts think might have once had water - the landing will be a piece of drama for Curiosity watchers. The worldâ€™s largest supersonic parachute and a jetpack-like device will be some of the tools scientists use in the attempt.

END_OF_DOCUMENT_TOKEN_TO_BE_REPLACED

[Update 5:16 p.m.] Oak Creek, Wisconsin, police Chief John Edwards said authorities are treating Sunday's shooting at a Sikh temple in that community as a "domestic terrorist-type incident," adding that the FBI will head the investigation. There was a service going on at the time of the shooting. Edwards was not willing to divulge any information about the shooter or the victims. No one is still inside the temple, he said.

[Update 4:52 p.m.] President Barack Obama said Sunday in a statement that "at this time, the people of Oak Creek must know that the American people have them in our thoughts and prayers" and vowed to "provide whatever support is necessary." He added, "As we mourn this loss which took place at a house of worship, we are reminded how much our country has been enriched by Sikhs, who are a part of our broader American family."

[Updates 2:45 p.m.]Â Greenfield police Chief Brad Wentlandt says four people were found dead inside the temple, three dead outside; one of those outside was the gunman.

[Updates 2:27 p.m.]Â The suspect shot by an officer was killed, authorities said.

[Update 1:42 p.m.] People are believed to be trapped inside the temple, the area's city councilman said. "As far as I know, it is still an active situation," Alderman Dan Jakubczyk told CNN.

Who belongs to the Sikh community?

Witnesses: This is sad, devastating

Several witnesses explain what they saw during Sunday's multiple shooting at a Sikh temple in Oak Creek, Wisconsin.

Police in Oak Creek, Wisconsin say at this time it doesn't appear there were multiple gunmen involved in the incident.

[Update 1:22 p.m.] Two men have been admitted to Froedtert hospital, a hospital spokeswoman said. One is in critical condition in the surgical intensive care unit; the other has been sent to an operating room.

[12:39 p.m.] Authorities responded to an incident at a Sikh temple in Milwaukee County on Sunday, where at least one body was seen lying in the parking lot. CNN affiliate WTMJ is reporting that multiple people may have been shot outside the temple.

WTMJ reports that the gunman may be on the loose. Aerial pictures show multiple bodies in the parking lot.

The shooting happened at about 10:40 a.m. local time, according to WTMJ.

Sikhism rose up 500 years ago in India as a monotheistic religion that rejected the caste system and scriptures of Hinduism.

Read more from our affiliates in the area: WISN | WTMJ

The U.S. Attorney's Office said it is not confirming or denying reports that Jared Loughner will plead guilty in last year's shooting rampage outside a Tucson, Arizona, supermarket.

The attack killed six people and wounded 13 others, including then-U.S. Rep. Gabrielle Giffords.

On Saturday night, the Los Angeles Times and the Wall Street Journal reported that Loughner, 23, is now mentally competent to understand the changes against him and that a status hearing on his competency, scheduled for Tuesday morning, will now be a change-of-plea hearing.

The Los Angeles Times attributed the information to "knowledgeable sources," while the Wall Street Journal said its source was an "official familiar with the case."

"I can neither confirm or deny the reports in the L.A. Times and other media about the Loughner case," Bill Solomon, spokesman for the U.S. Attorney's Office in Arizona, told CNN when asked about the reports late Saturday night.