RT @CNNBusiness: The Chinese government announced Wednesday that it would revoke the press credentials of three Wall Street Journal reporteŌĆ”

After a recanvass of more than 100 Iowa caucus precincts, Pete Buttigieg now leads Bernie Sanders by less than a huŌĆtwitter.com/i/web/status/1ŌĆ”vw

The coronavirus has now killed more than 2,000 people across the globe and sickened more than 75,000. Follow live uŌĆtwitter.com/i/web/status/1ŌĆ”ud

NASCAR driver Ryan Newman is awake and speaking with family and doctors, a day after a fiery crash near the finishŌĆtwitter.com/i/web/status/1ŌĆ”ar

Faye Swetlik died from asphyxiation hours after she was abducted from her South Carolina home last week, a coronerŌĆtwitter.com/i/web/status/1ŌĆ”aD 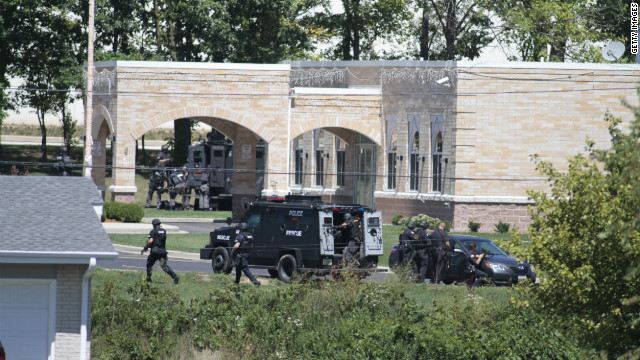 The man allegedly responsible for six shooting deaths at a Sikh temple near Milwaukee was an Army vet, police say.
August 6th, 2012
09:13 AM ET

The man who shot six people to death and wounded three others during a rampage at a Sikh temple in a Milwaukee suburb was an Army veteran who may have been a white supremacist, according to a law enforcement source involved in the investigation.

Law enforcement sources familiar with the investigation named him Monday as Wade Michael Page, 40. One law enforcement official said he owned the gun used in the shooting legally.

He had apparently served on active duty, a U.S. official familiar with his record said. The source declined to give further details.

Those inside the temple say the man had a 9/11 tattoo on one arm.

The shooter was killed by an officer at the scene after allegedly fatally shooting six people Sunday at a Sikh temple in Oak Creek, Wisconsin.

These drones are designed to bring internet access to remote locations. The company behind them says they could helŌĆtwitter.com/i/web/status/1ŌĆ”Gj
cnni

6:48 am ET February 19, 2020 RETWEET
"None of us feel like our lives will ever be the same again," said one passenger on the Westerdam cruise ship thatŌĆtwitter.com/i/web/status/1ŌĆ”5x
cnni

6:43 am ET February 19, 2020 RETWEET
JUST IN: 79 new cases of coronavirus have been confirmed from the quarantined Diamond Princess cruise ship, accordiŌĆtwitter.com/i/web/status/1ŌĆ”Z7
cnni

6:32 am ET February 19, 2020 RETWEET
A second person died of the coronavirus in Hong Kong on Wednesday. There are now 63 confirmed cases of the virus acŌĆtwitter.com/i/web/status/1ŌĆ”PK
cnni