Mash-up: Rover on Mars, Jesus on a tortilla

Here's something that works

Simon DeDeo is an Omidyar Fellow at the Santa Fe Institute, where he researches theoretical biology and physics. He tries to explain why space exploration, such as this week's landing of a rover on Mars, strikes such a chord with so many of us.

Maybe we saw something deeper in the successful landing of Curiosity. We experienced - even if vicariously - a group achieving unambiguous excellence. In a nation where a city like Detroit can nearly collapse, where consensus on important policy issues seems far off, where some of the "best and brightest" minds of finance have built fragile institutions, how is it possible that a large cast of scientists and engineers can pull off such a remarkable task?

One person's junk is a hoarder's treasure

Although computing power has made much of our progress in space possible, the death of the conventional personal computer may be imminent as technology marches forward. This prospect does not sit well with some of our readers, such as this one:

Never, I tell you ... Never. I will chain myself to my PC. They can have it when they pry it from my cold dead hands. It's constitutional, the right to bear PCs.

Readers also turned a jaundiced eye toward the news that American judo athlete Nicholas Delpopolo had been thrown out of the Olympics after a failed drug test he blamed on inadvertently eating food that had been baked with marijuana.

It appears the marijuana also caused him to lose any semblance of rationality.Â  That has to be the worst excuse I've ever heard, except for 'the dog ate my homework'.Â  If you want to be a pothead, live with the consequences.Â  "Oops, I ate a pot brownie."Â  This guy's credibility just went in the toilet.

There's a good restaurant in East Atlanta Village called Holy Taco. Maybe they could work out some kind of a deal with La Amistad Adult Daycare in Beeville, Texas, where Ernesto Garza discovered a startling image on his breakfast taco. CNN affiliate KENS has the rest of the story. 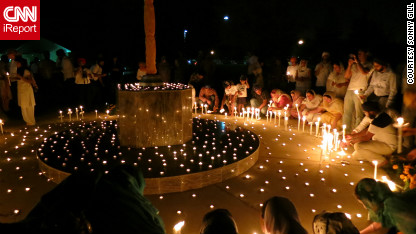 CNN iReporter Sonny Gill's photo shows Sikhs and supporters gathered for a candlelight vigil Monday in Palatine, Illinois. Click on the photo for more images from the event.

CNN iReporter Sonny Gill, 30, of Chicago is a member of a Sikh community in Palatine, Illinois. He took part in a vigil to honor the victims of the mass shooting at a Wisconsin Sikh temple.

"I personally went to the vigil to support our community and family of Sikhs who are going through this hard time. And to show that their strength is still here, regardless of these senseless acts," he told CNN. "The biggest thing that stuck out to me was that we received prayers and heard from various community members from different backgrounds and religions. That truly showed how united we are as Americans and that one person's act will not deter us from continuing down our path of welcoming peace."

The U.S. Postal Service Board of Governors is expected to discuss Wednesday and Thursday the post office's failure to make its August 1 payment into a retiree health care plan, and the even bigger financial problems that defaultÂ  indicates.

1963 - Fifteen thieves in Great Britain make off with more than $6 million in what becomes known as "The Great Train Robbery."

1974 - President Richard Nixon announces he will resign in a national television address; he leaves office the next day.

A US Capitol Police officer was indicted on obstruction charges in connection to the January 6 insurrection cnn.it/3FQREnn
cnni

4:45 pm ET October 15, 2021 RETWEET
Debbie Blount is, for the most part, your average college undergrad â€” with piles of homework and a packed after-schtwitter.com/i/web/status/1â€¦5p59
cnni