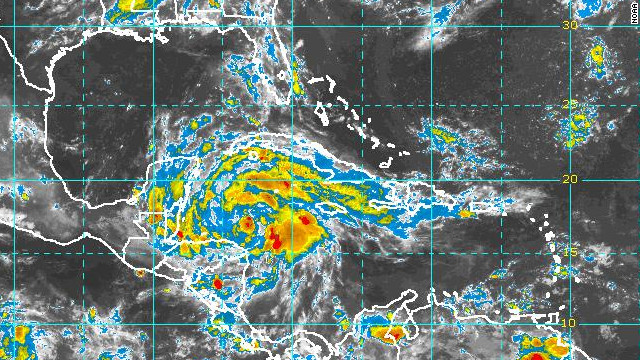 Ernesto is expected to bring areas in Belize, the southern Yucatan Peninsula and northern Guatemala up to 12 inches of rain.
August 7th, 2012
12:01 PM ET

Tropical Storm Ernesto expected to make landfall as a hurricane

Tropical Storm Ernesto is expected to reach hurricane strength by the time it makes landfall on Mexico's Yucatan Peninsula on Tuesday night.

The Mexican government extended a hurricane warning north to the city of Tulum on Tuesday as the storm churned in the Caribbean.

In Nicaragua, government officials said they were evacuating about 1,500 people in coastal areas and had banned boats from setting sail.

As of 11 a.m. ET Tuesday, the storm was about 220 miles (350 kilometers) east of Chetumal, in Mexico, the National Hurricane Center reported. Ernesto was moving west-northwest at 14 mph with maximum sustained winds of 65 mph.

6:12 am ET April 9, 2020 RETWEET
The first cases of coronavirus in New York City most likely originated in Europe and other parts of the United StatŌĆtwitter.com/i/web/status/1ŌĆ”bw
cnni

6:02 am ET April 9, 2020 RETWEET
The Duke and Duchess of Cambridge spread some Easter cheer to pupils and teachers at one primary school in the UK wŌĆtwitter.com/i/web/status/1ŌĆ”0S
cnni