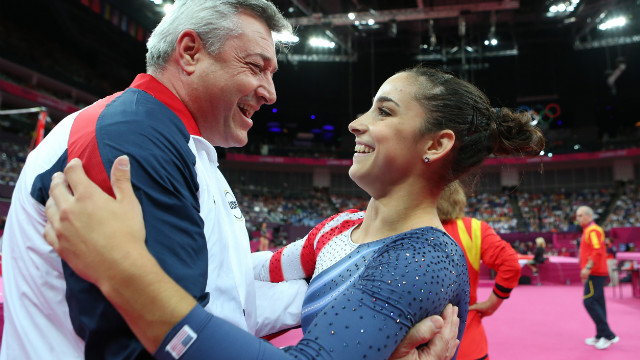 Aly Raisman celebrates with her coach after an appeal of her balance beam score earned her a bronze medal.
August 8th, 2012
01:05 PM ET

When U.S. gymnast Aly Raisman completed her routine on the balance beam during the individual finals Tuesday, she hugged her coach and stared at the scoreboard, waiting to see whether she had done enough to medal.

When the score finally flashed, a nervous Raisman became disappointed.

"Oh, no!" her coach, Mihai Brestyan, proclaimed as he spotted the eerily familiar results.

She had landed in fourth place – again – and just shy of the medal stand for the second time in the Olympics.

What happened next would again thrust the judges, athletes and coaches into a heated debate over Olympic scoring.

As Raisman tried to hold back her disappointment, shouts came from the crowd. U.S. national team coordinator Martha Karolyi, her husband, Bela (who is no longer associated with Team USA but is a constant fixture), and vice president of USA women's gymnastics Kathy Kelly shouted and motioned for Brestyan to file a protest.

They believed that the judges hadn't accurately tabulated her difficulty score, specifically the connections between a few of her elements on the beam. Brestyan raced around the gym to get a form to fill out in the allotted time. Meanwhile, Raisman congratulated Catalina Ponor of Romania, who was in position for bronze.

Raisman and Team USA anxiously stared at the scoreboard as judges from the International Gymnastics Federation reviewed video of her routine.

"It might be a tie," Raisman said: a repeat of the all-around finals. Raisman had tied Russia's Aliya Mustafina, which in the all-around means the lowest score was dropped. Raisman, long seen as the rock of the team, had narrowly missed an individual medal because of the tiebreaker rule. She was worried it would happen again.

And Raisman was right, it was a tie. But her coach quickly reminded her she would end up on the podium because the execution scores alone, not the difficulty, were judged in the tiebreaker.

The scoreboard flashed the official result. The tiebreaker went in Raisman's favor this time, and she received a bronze medal.

It was perhaps one of the longest moments of Raisman's career. But it was not the first time this chaotic scene had played out in the Olympics - or questions about the accuracy of judging had come up.

For years, debate has stirred about how accurately sports can be judged, especially in the Olympics. Many have argued that everything is subjective. And in a sport that comes down to hundredths of a point, that can be everything. As Raisman knows, it can also be the difference between being an Olympic medalist and missing out entirely.

That is part of the reason the inquiry system Raisman's coach used was instituted.

"The inquiry was introduced along with FIG's new scoring system following the 2004 Olympics, where judging disasters marred the men's all-around and high bar finals. (The inquiry replaced an appeals process, which had a far lower rate of overturning scores at the 2004 Olympics, at least)," Nick Zaccardi wrote in a Sports Illustrated column explaining the system, using the acronym for the International Gymnastics Federation. "The FIG did away with the perfect 10 and redid its 'code of points' system with the more complicated two-pronged approach. The benefits of the change included eliminating potential bias in judging, the FIG said in 2005. Video review was also introduced."

Team USA's use of the inquiry in Raisman's case was the third in gymnastics during this Olympics alone.

Japan made a similar request over Kohei Uchimura's score on the pommel horse during the men's team finals.

Uchimura, one of the best men's gymnasts and a hero in his home country, was seen as a lock to propel Japan to a medal. But after his score was shown on the screen, it seemed Japan would be left off the podium. The scores placed China with the gold, Great Britain with the silver and Ukraine with the bronze. Japan, like Raisman, sat in fourth.

As commentators on NBC wondered whether "the greatest gymnast of our time dropped the ball," the camera quickly panned to the judges' table, where a Japanese coach was seen with money in his hand, filling out an inquiry form. FIG requires a payment of $300 to file an appeal. If the score is overturned, the money is returned.

Japan claimed that Uchimura had also been overlooked in the scoring: specifically, that he did connect a handstand before his dismount. 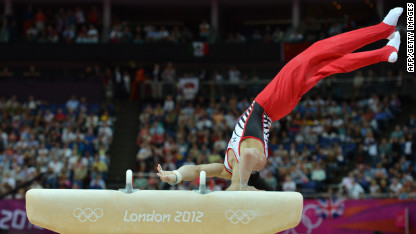 Japan challenged the score given to gymnast Kohei Uchimura on the pommel horse during the men's team final.

An announcement came in Japan's favor. It was one that greatly altered the standings. Ukraine was left without a medal, and the host nation was now taking home the bronze, something the home crowd was clearly displeased about.

During the men’s all-around competition, Germany's Fabian Hambuchen's pommel horse score was also protested, but the committee rejected the appeal.

The nature of scoring in gymnastics, similar to figure skating, has been debated as largely subjective despite attempts to correct concerns through recent FIG changes.

That's something Romania's Ponor, who lost out on a medal after Raisman's challenge, and her coach now know all too well. Ponor's face went from excitement to disappointment in the course of a few minutes. Coach Yuliy Kuksenkov who said after the ruling that "life is life," perhaps best capturing many people's thoughts regarding the routine disagreements about scoring.

"In athletics, 100 meters is just 100 meters," Sports Illustrated quoted him as saying. "Sometimes in gymnastics, it's 95 meters or 105 meters."

It's not all about gymnastics, though.

A scoring controversy in fencing last week left South Korea's Shin A-Lam in tears - and left her refusing to leave the piste. She appealed to judges over a delayed and stuck clock that had resulted in extra points being awarded to Britta Heidemann of Germany. Had she left the piste during the appeal, it would have signaled she agreed with the judges.

YouTube: A Lego re-enactment with the play-by-play, created by The Guardian

The South Korean was photographed sitting in the same spot for more than 70 minutes as she awaited the appeal and then refused to leave after it was handed down. She was finally escorted off the stage, sobbing. 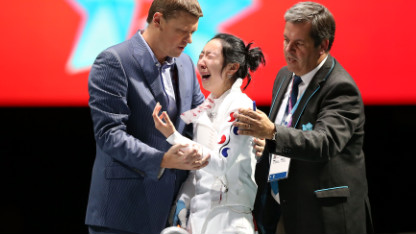 South Korea's Shin A-Lam was finally escorted off in tears.

"I did everything I could," Shin told Reuters after the match. "They said 'your fencer has to continue the match,' so I had to accept the decision."

Accepting the decision may be part of it, but so is being prepared and willing to fight for the scores you believe are deserved.

U.S. gymnast Jordyn Wieber's coach told Sports Illustrated that he kept a filled-out inquiry form with him, just in case.

But as Raisman, Brestyan, Ponor, Uchimura, Shin and others know: It's an imperfect two-sided coin. You have to know when to make the call and be able to do it quickly in gymnastics, and sometimes you just fall on the wrong side of the ruling.

"I agree with the system," Brestyan said, according to Sports Illustrated. "The system sometimes helps. Sometimes not."