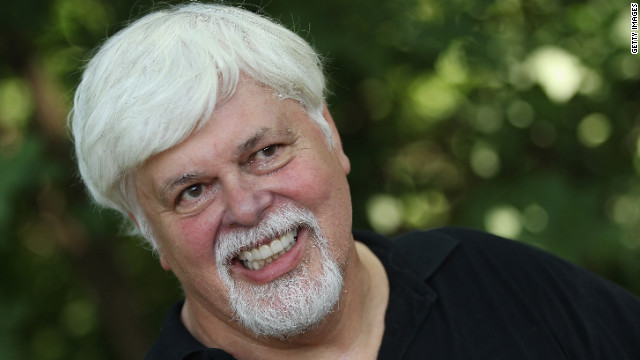 The U.S.-based Sea Shepherd denies the allegations, arguing that the charges have less to do with law than with Watson’s anti-conservationist enemies.

In the 2002 incident, according to Sea Shepherd ship operations officer Peter Hammarstedt, the Ocean Warrior found a Costa Rican crew killing sharks for their fins in Guatemalan waters. The Ocean Warrior initially had permission from Guatemalan authorities to stop it and tow the vessel into port, he said.

The Ocean Warrior used water cannons on the fishing vessel, but “there were no injuries and no physical damage to any ship,” Hammarstedt said in May.

The Ocean Warrior did stop the ship, but Guatemalan authorities eventually asked Watson to release it, Hammarstedt said.

Shark finning is the practice of cutting the fins off sharks and throwing the sharks back into the sea, where they die. The fins are used for expensive soup, mostly in China.

The current charge, according to Interpol, is “causing a danger of drowning or of an air disaster.”

Sea Shepherd says that “anyone who’s viewed the documentary can clearly see the charges are bogus.”

“The water cannon Captain Watson allegedly used to stop the illegal shark finners never reached the wheelhouse, thereby having no possibility of interfering with their safe navigation, nor were there any aircraft overhead at the time so as to potentially cause an ‘air disaster,’” Sea Shepherd said in a statement issued Wednesday.

Interpol’s wanted notices, called red notices, are sent to police agencies across the world, but they are not arrest warrants.

“Each of Interpol’s 190 member countries must apply their national laws and standards in determining whether it may detain or arrest the wanted person,” Interpol says.

May 2012: Bail set for ‘Whale Wars’ star in extradition fight