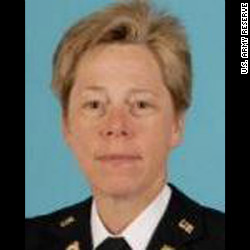 â€śI donâ€™t think I need to be focused on that," Stripes quoted Smith as saying. "What is relevant is upholding Army values and the responsibility this carries.â€ť

â€śIt is indeed a new era in Americaâ€™s military when our most accomplished leaders are able to recognize who they are and serve the country they love at the same time," Aubrey Sarvis, executive director of the Servicemembers Legal Defense Network said in a statement.