House passes a bill to prevent a government shutdown and suspend the nation's borrowing limit, but it's unlikely toãtwitter.com/i/web/status/1ãÎfU

'Decisive decade for our world': President Biden began his address to the UN by acknowledging the huge losses globaãtwitter.com/i/web/status/1ãÎdb

President Biden speaks at the UN where he's expected to address the Afghanistan withdrawal, the Covid-19 pandemic aãtwitter.com/i/web/status/1ãÎRf

A two-dose version of Johnson & Johnson's vaccine is 94% effective against Covid-19, the company says, making it coãtwitter.com/i/web/status/1ãÎ6p

Mash-up: In the sky: Fireworks, meteors, a granny and a bobcat

The 2012 London Olympic Summer Games ended Sunday night in spectacular fashion, even if NBC saw fit to cut away from it in favor of a show starring a monkey.

Fireworks weren't the only thing worth looking at in the sky. CNN iReporter Abe Blair, a professional photographer, shot pictures of the Perseid meteor shower over Crater Lake, Oregon, for six to seven hours Sunday night. But his patience paid off with this spectacular image of meteors lighting up the sky near the Milky Way. He used a low-power lamp to light the gnarled tree in the foreground.

"This was my first time watching a meteor shower and this was the image I was hoping to capture," he says. "It was fun to watch, but a little frustrating to photograph since you're not able to know exactly when and where the meteor would pass by." 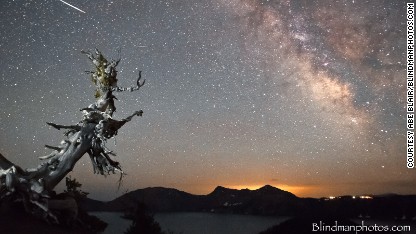 Another iReporter, Wright "Boz" Johnson, solved that problem by shooting time-lapse video of the meteor shower over Lagrange, Kentucky.
"I live on top of a big hill with lots of open land around. I often shoot time-lapses of clouds, stars, sunsets and lightning, so I was very excited to try my hand at a meteor shower," he says. "It was the best I've seen in Kentucky. I have seen showers in the desert in Utah and in Canada that will be hard to beat, but it was still very nice. I was impressed."
Check it out here.

What do you plan to do for your 104th birthday? Alice Aho set a pretty high goal: To climb Oregon's Mount Hood. With just a little help from her family, she saw her birthday wish come true, CNN affiliate KPTV reports.

Johns School is a Brooklyn, New York, district attorney's office program that teaches the dangers and penalties of prostitution and sex trafficking. Rhonnieô Jaus, the chief of the Sex Crimes Bureau, said the class attempts to sensitize and educate the men on the dangers of prostitution to both the customer (the john) and the prostitute.

You think you're having sex with an adult, and it turns out it could be something quite different. It could be a trafficked child brought from China, brought from South America, so there are many different ramifications of this crime.

Iranian President Mahmoud Ahmadinejad will join a conference of Islamic nations in Mecca, Saudi Arabia. The only item on the agenda is the conflict in Syria, where Iran and the Saudis are supporting opposite sides.

1997 - Timothy McVeigh is formally sentenced to death for the 1995 Oklahoma City bombing.

2003 - A massive blackout in the Northeast leaves millions without power in the United States and Canada.

2006 - Israel begins its withdrawal from Lebanon.