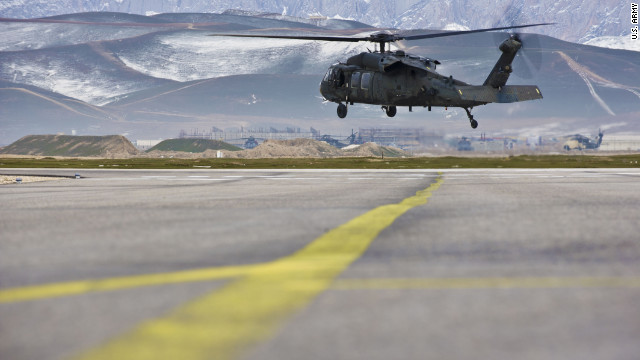 This UH-60 Black Hawk helicopter in Afghanistan is believed to be similar to the helicopter that crashed on Thursday.
August 16th, 2012
08:31 AM ET

7 Americans among 11 killed as NATO copter crashes in Afghanistan

[Updated at 8:31 a.m. ET] Seven American service members were among the 11 people killed in the helicopter crash in southern Afghanistan Thursday, NATO's International Security Assistance Force said. The other four were Afghans.

ISAF said three were U.S. Forces-Afghanistan service members. The others include four ISAF service members, but it is not clear what their nationalities are.

Three members of the Afghan National Security Forces and an Afghan civilian interpreter also died. The cause of the crash is under investigation, ISAF said in a news release.

The ISAF helicopter was a UH-60 Black Hawk. The precise location of the crash was not released.

India's Supreme Court has set a deadline for women to be admitted to the country's elite defense academy for the fiâ€twitter.com/i/web/status/1â€¦IY
cnni

8:21 am ET September 23, 2021 RETWEET
In an exclusive interview with @cnnsport, Chelsea striker Romelu Lukaku has urged the CEOs of social media companieâ€twitter.com/i/web/status/1â€¦El
cnni

8:00 am ET September 23, 2021 RETWEET
There's a 1-in-3 chance Lake Powell, which is located on the Colorado River, won't be able to generate hydropower iâ€twitter.com/i/web/status/1â€¦CF
CNNweather

7:56 am ET September 23, 2021 RETWEET
Dinosaurs, like us, got sick and injured. Until relatively recently, however, diagnosing multi-million-year-old diâ€twitter.com/i/web/status/1â€¦jC
cnni