The highs and lows of SCRABBLE: A cheater overshadows a record champion

Those two drastically different words couldn't describe more perfectly the highs and lows of this year's National SCRABBLE championship which saw one player break two winning records and another casting a shadow over the tournament by being the first person ejected from it.

But his highly touted achievement in the SCRABBLE world was overshadowed by two of those precious blank tiles that are so valuable because they can be used as any letter you like.

That's because one of the top youth players in the country was kicked out of the Division 3 National┬ĀSCRABBLE Championship Tournament on Tuesday for cheating, according to John D. Williams Jr., the executive director of the National SCRABBLE Association.

It's something organizers say has never happened in the tournament's 30 years of competition.

During the 24th round of the annual tournament in Orlando, Florida, on Tuesday, the director was called over to a Division 3 game, a lower level of competition than what Richards won. A young teen was under suspicion by other players, according to Williams, who noted the tournament has a self-policing policy.

It seems the player, who officials have not named, was hoping to get a little extra help but was foiled. ┬ĀThe player had won a game and took two blanks as the tiles were gathered and put in the grab bag. When his next competitor stepped in to play, the opponent asked that the tiles be counted. Two were missing.

"It was discovered that two blanks were not put into the tile bag as they should have been when the board was cleared off to start the game," according to the SCRABBLE tournament's website.┬Ā"The player was questioned and admitted to taking them."

Another player observed the young teen drop or place tiles near his foot, according to Williams.┬ĀThe player was called over and confronted, and a witness verified the story.

Daniel Horowitz, an iReporter at the tournament, explained that a player saw a red flag by how the blank tiles were positioned on the board. Normally, the tiles are arranged randomly at the beginning of the game as new players arrange the tiles on four┬Ā5×5 grids is to verify that all 100 tiles are there, he said. 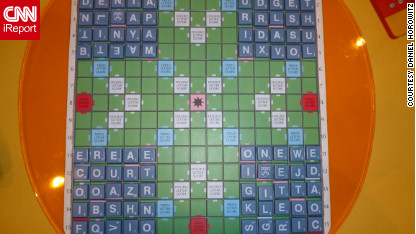 Daniel Horowitz, an iReporter, shows how the boards are usually checked to make sure all tiles are there.

Horowitz added that it is common courtesy to ŌĆ£squareŌĆØ the tiles at the conclusion of each game so that the players who play the next game will see that all the tiles are accounted for.

iReport: At the SCRABBLE tournament

The teen confessed to cheating, and he was immediately removed from the tournament. His┬Āopponents┬Āwill be retroactively given forfeit wins. There will be a disciplinary hearing to determine what the sanctions will be, Williams said.

Peter Sokolowski, a lexicographer with Merriam-Webster, tweeted about what happened and how┬Āreferees┬Ācome into play if there is a dispute.

Adding 'f-bomb' to dictionary makes for an 'aha moment'