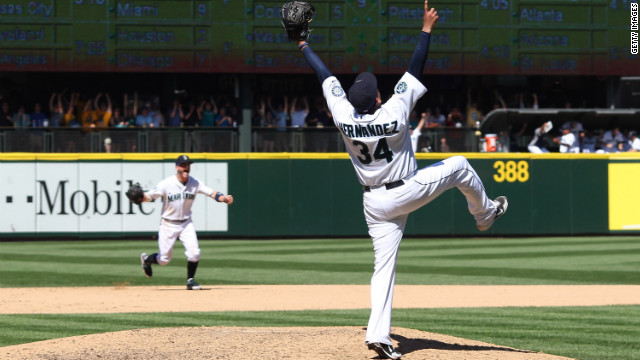 What might be equally remarkable is three of those 23 perfect games have been tossed this year, with a quarter of the season left to play.

Add to the perfect games, three other no-hitters this season, and you have even the most casual of baseball fans asking, what makes 2012 so perfect for pitching?

After Cain's perfect game in June, SI.com's Jay Jaffe offered up a few theories: more games, more than twice as many as each team once played; lower batting averages leading to a major league average that's at a four-decade low; record-high strikeout rates; and better defense as teams use an avalanche of statistics to position their fielders more effectively, as with an infield shift.

SI.com baseball columnist Tom Verducci made a few similar points and added another, the effect on pitching of baseball's Steroid Era, the time when hitters were bulking up with performance-enhancing drugs. Baseball now tests for steroids, but Verducci says the Steroid Era in a way benefited those on the mound.

"The need and emphasis on pitching development was a response to the wild offensive years of The Steroid Era," Verducci wrote.

And just look at how pitchers have developed. ESPN.com baseball writer Jayson Stark put forth this: The number of pitchers with an average fastball velocity of 95 mph or more as has more than tripled in the past five seasons, from 11 in 2007 to 35 in 2011.

And they're getting faster at younger ages, according to Stark's report.

"Just about every guy (on a scouting director's radar) throws 90, and most of them throw 92. And you never saw amateur guys throwing in the upper 90s. Now you see it all the time. It's unbelievable," Stark quotes John Mirabelli, the Cleveland Indians vice president of scouting operations, as saying.

Writing on BigLeadSports, Jason Lisk points to better defense, i.e., fewer errors, as one reason behind the wave of perfection.

"Error rates are also much lower now, and you canâ€™t have the ingredients for a perfect game if a fielder commits an error," Lisk says.

In a blog post after Humber's perfect game, the number-savvy publication The Economist looked at the math behind the increase in no-hitters and perfect games.

Another is that after years of high (offense), pitchers as a group have regained the upper hand over hitters of late. In 1999 and 2000 batters reached base 34.5% of the time. Last year this ratio fell to 32.1%. That decline alone makes perfect games 2.6 times more likely now than they were a decade ago.

The Economist blog also notes that Humber pitched his perfect game in Safeco Field, as did Hernandez on Wednesday, and the effect Safeco has on hitters, using the Mariners' 2011 season as an example.

Last year (Mariners) hitters reached base a mere 28.9% of the time when playing at home. That means that an opposing pitcher would be 3.5 times more likely to throw a perfect game at Safeco than he would facing an average lineup in an average stadium.

Of course, if you think The Economist has some baseball numbers clout, you need to see what the Society for American Baseball Research has put together on the math behind no-hitters and perfect games.

There are actual equations and graphs in this report as scary as those you saw in high school trigonometry.

But after all that math and countless computations, the report gives this:

"Those who have pitched no-hitters and perfect games had, in general, far superior pitching ability than the average pitcher in baseball history."

The colossal 180 million-year-old fossilized remains of an ichthyosaur have been found in the UK, in what researcheâ€twitter.com/i/web/status/1â€¦qK
cnni

2:00 pm ET January 16, 2022 RETWEET
Watch how noodles, rice and burgers are prepared and delivered by robots at the Beijing Olympics Village.â€twitter.com/i/web/status/1â€¦eT
cnni