For the living, their houses are shelled, they can't find food, they donŌĆÖt have a job. All they can do is throw up their hands in exasperation. They donŌĆÖt like the regime, but it's impossible for them to live under these circumstances. They are the innocent people, stuck in the middle, who will have to live with the consequences. And often they'll be the ones paying the highest price - with their lives. 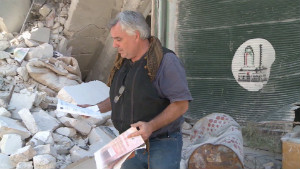 "The problem with this revolution is that we donŌĆÖt have a leader," the man tells me. "It would be good if we had five leaders, but we have 500 leaders. And thatŌĆÖs what worries me."

–┬ĀLife and death in Aleppo:┬ĀHe wasn't a fighter or a revolutionary. But 45-year-old Hassan, a shopkeeper, died from a sniper's bullet.

–┬ĀHow to sneak into a war zone:┬ĀTo get in and out of Aleppo, it helps to have a Plan B. And maybe a Plan C and D.

A globe-trotting gecko has accidentally made the trip from Egypt to England after hitching a ride in a container ofŌĆtwitter.com/i/web/status/1ŌĆ”vQ
cnni

12:30 am ET January 30, 2023 RETWEET
"For disenfranchised communities, dance can be subversive and revolutionary. It can represent an act of joyful rebeŌĆtwitter.com/i/web/status/1ŌĆ”fL
cnni

A globe-trotting gecko has accidentally made the trip from Egypt to England after hitching a ride in a container ofŌĆtwitter.com/i/web/status/1ŌĆ”vQ
cnni

12:30 am ET January 30, 2023 RETWEET
"For disenfranchised communities, dance can be subversive and revolutionary. It can represent an act of joyful rebeŌĆtwitter.com/i/web/status/1ŌĆ”fL
cnni