Russian forces withdraw from Snake Island in the Black Sea. Moscow calls it a "goodwill" gesture but Ukraine says iãtwitter.com/i/web/status/1ãÎxV

Ukraine secures the return of 144 soldiers, including dozens who helped defend the Mariupol steel plant, in prisoneãtwitter.com/i/web/status/1ãÎW2 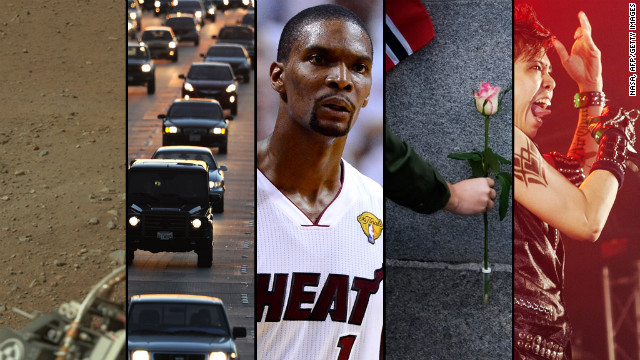 One of the key concerns of travelers for the upcoming holiday weekend may be gas prices.

Last Sunday, the Lundburg Survey reported that the average price of a gallon of gas had jumped 18 cents over the previous two weeks.

Some of the NBA's biggest stars, including Chris Bosh, Carmelo Anthony and Rajon Rondo, will be on hand for a basketball camp in New York City on Wednesday to benefit President Barack Obama's re-election campaign.

Participants will also get to play in a game coached by the players, the website says.

A man who admits killing 77 people in a shooting and bombing spree in Norway last year is expected to hear a verdict in the case on Friday, with questions about his sanity being a key factor.

According to authorities, Anders Behring Breivikô set off a fertilizer bomb outside the prime minister's office on July 22, 2011, killing eight people. He then took a ferry to Utoya Island, the site of a Labour Party youth camp, where more than 700 young adults were meeting.ô Authorities say he roamed the island shooting at campers, killing 69 people before members of an elite Norwegian police unit took him into custody

Breivik was put on trial this year. Prosecutors have asked that Breivik be acquitted on the grounds of insanity, in which case he would be held in a secure mental health unit. If he is fully acquitted on the grounds of "necessity," as urged by his defense, he could go free. If he is ruled sane and found guilty of some or all the charges, he would be sentenced to up to 21 years in prison.

Last week, an independent commission issued a report saying that security services could have done more to prevent the attack.

Music will be in the air if not in any instruments in Oulu, Finland, on Friday for the finals of the Air Guitar World Championships.

Organizers call it the grand finale of the Air Guitar World Tour.

According to the U.S. Air Guitar Championships, the American representative will be Matt Burns, known as "AIRISTOTLE," who took the U.S. crown during a competition in Denver in July. He'll be matched up against championship air guitarists from two dozen other countries in Finland, according to the organization's website.

What the organization terms "dark horses" or wild cards, get a chance for a spot in the finals during a qualifying round on Thursday.

What does the winner get? A real guitar, of course.

4:17 am ET June 30, 2022 RETWEET
Xi Jinping arrives in Hong Kong, his first visit outside mainland China since the beginning of the pandemic cnn.it/3a162hQ
cnnbrk