BritainŌĆÖs Prince Harry has a number of groups interested in how he conducts his private life, not the least of which is his employer, the British Army.

A spokesman for the United KingdomŌĆÖs Defense Ministry said Wednesday that the ministry wouldnŌĆÖt comment on pictures showing Harry - third in line to the British throne and an Army captain who has served in Afghanistan - naked while on vacation in Las Vegas.

He may be relieved that the incident is being portrayed in some circles as an unfortunate breach of his trust.

Although thereŌĆÖs no British military reaction, the incident did get us to wondering how much trouble a potentially embarrassing - even if not illegal - photo or video would present for a U.S. service member.

Depending on the specifics, the U.S. Uniform Code of Military Justice could pose a number of difficulties for Americans in uniform, said Victor Hansen, a retired Army Judge Advocate GeneralŌĆÖs Corps officer and a professor at New England School of Law, Boston.

END_OF_DOCUMENT_TOKEN_TO_BE_REPLACED 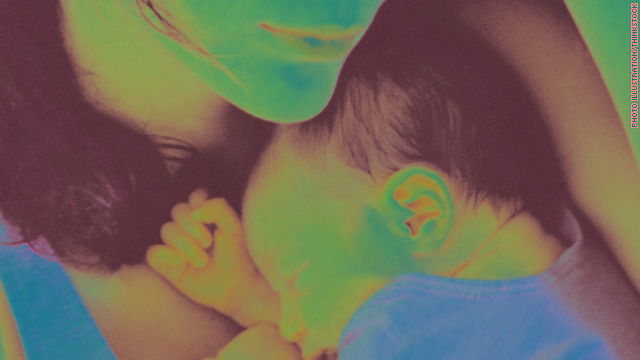 Comments: Why should rapist have access to child they made?

Editor's note:┬ĀWe're listening to you. Every day, we spot thought-provoking comments from readers. Here's a look at what readers are saying.

Chicago lawyer Shauna Prewitt wrote an opinion article for CNN.com detailing how she was raped in college and went on to not only have the resulting child, but fight laws allowing the fathers in these cases to seek "the same custody and visitation rights to their children that other fathers enjoy." The story comes after U.S. Rep. Todd Akin's controversial remarks about "legitimate rape" and abortion.┬ĀJudging by the comments, it left a lot of readers examining their views.

Raped, pregnant and ordeal not over

Several male readers wrote in to say they gained a new perspective from the story.

holycow69: "Thank you for the courage to speak up. You taught me things I was not aware of, because as a man I don't have to ever think about these ramifications. My wife was raped nearly 20 years ago, devastating for my family. Her father's only comment was, 'You shouldn't dress so provocatively.' I wanted to rip his head off, but yelled at him that 'rape is rape, and she didn't ask for it.' No woman , no person, no one should ever have to endure that crap. Time for men to grow up and defend women's rights, not subjugate them. Time for real men to step forward. My question to Republicans is this, 'Are you man enough?' "

The subject was dumbfounding for some.

Guest:┬Ā"As a man, I have an odd point of view of rape. I have never been exposed to it personally, nor would I ever consider committing it. I don't live in fear of it. It's such a heinous crime that I don't want to think about it. Mind you, as a human being, I have compassion for the victims of rape, but I acknowledge that I will always have a kind of ignorance towards the subject, as it is unfathomable to me how a human being could disrespect and hurt another human like that.┬ĀI think Akin is not a monster. He is ignorant. He deserves forgiveness for his ignorance. But I hope NO voter would ever want someone that ignorant to speak for them."

The truth about lies

Canards, lies and distortions are spread by repetition on the Internet, even by individuals and groups you may trust, the availability of fact-checking sites notwithstanding. University of Southern California psychology professor Jesse Graham says people have different motivations yet they all think that the truth is on their side:

It just spreads like a virus and no amount of debunking seems to stop it. It's frustrating to anybody that really cares about our democracy, that really wants this to be a civilized conversation, and that we can as a nation sort of agree on the direction to move our country forward.

Living large in a small space 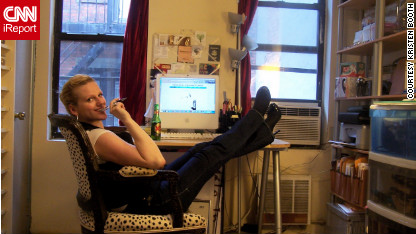 Kristen Booth stretches out in her East Village apartment.

Having lived in a very cozy 214-square-foot East Village studio apartment for 13 years, CNN iReporter Kristen Booth says tight quarters are a given for New Yorkers.

"When I first moved in, I loved it. Heating and air conditioning costs are significantly less. It doesn't take nearly as much to keep the temperature right," she says. "Small spaces force one to not be a hoarder, though sometimes I still feel that way. Also, it generally proves that we really don't need as much as we think we do to live right. But I'd like to live a little larger at this point and have a bubble bath!"

CNN Detroit affiliate WDIV reports that kindhearted people have pledged more than $15,000 to help Niko, a dog who was shot in the face Saturday by a home intruder. Niko's owner, Gail King, also was shot but is out of the hospital, and the only thing on her mind now is her loyal yellow Lab.

END_OF_DOCUMENT_TOKEN_TO_BE_REPLACED 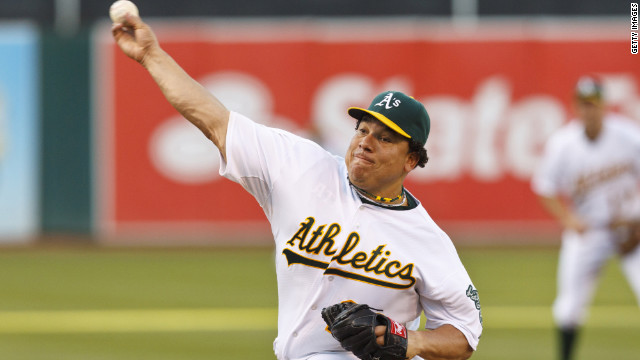 Oakland Athletics pitcher Bartolo Colon will miss the rest of the regular season due to his suspension.
August 22nd, 2012
02:27 PM ET

Bartolo Colon, a starting pitcher for the playoffs-chasing Oakland Athletics, has been suspended for 50 games after testing positive for synthetic testosterone, Major League Baseball said Wednesday.

The move comes a week after 2012 All-Star Game MVP and San Francisco Giants outfielder Melky Cabrera was given a 50-game suspension for a positive testosterone test.┬Ā Colon is the fifth MLB player to be suspended this year after testing positive for performance-enhancing drugs, MLB spokesman Michael Teevan said.

ŌĆ£I apologize to the fans, to my teammates and to the Oakland A's," Colon said in a statement released Wednesday by the Major League Baseball Players Association. "I accept responsibility for my actions and I will serve my suspension.ŌĆØ

END_OF_DOCUMENT_TOKEN_TO_BE_REPLACED 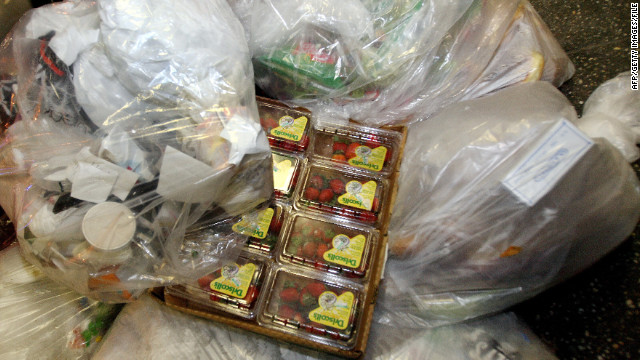 Forty percent of food in the United States is never eaten, amounting to $165 billion a year in waste, taking a toll on the country's water resources and significantly increasing greenhouse gas emissions, according to a report from the Natural Resources Defense Council released this week.

The group says more than 20 pounds of food is wasted each month for each of 311 million Americans, amounting to $1,350 to $2,275 annually in waste for a family of four. Think of it as dumping 80 quarter-pound hamburger patties in the garbage each month, or chucking two dozen boxes of breakfast cereal into the trash bin rather than putting them in your pantry.

The report points out waste in all areas of the U.S. food supply chain, from field to plate, from farms to warehouses, from buffets to school cafeterias.

"Food is simply too good to waste," the report says. "Given all the resources demanded for food production, it is critical to make sure that the least amount possible is needlessly squandered on its journey to our plates."

END_OF_DOCUMENT_TOKEN_TO_BE_REPLACED 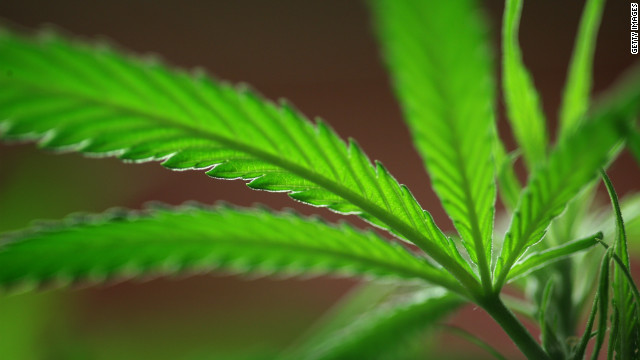 More than a half-million marijuana plants have been destroyed in the two-month federal operation.
August 22nd, 2012
07:51 AM ET

$1 billion in pot destroyed in raids on federal lands

More than $1 billion worth of marijuana has been uprooted from federal lands during a two-month operation targeting illegal pot farms, federal authorities announced Tuesday.

Operation Mountain Sweep has resulted in the destruction of┬Ā 578,000 marijuana plants, Benjamin B. Wagner, U.S. attorney for the Eastern District of California, said in a press release.

Wagner said 14 individuals in California have been indicted on charges resulting from Operation Mountain Sweep. Authorities have shut down 96 pot farms on public lands in California since the operation began July 1, the federal authorities said. Among those pot farms were sites in national forests and parks, including Death Valley National Park.

END_OF_DOCUMENT_TOKEN_TO_BE_REPLACED

In a dusty old attic in Chattanooga, Tennessee, Stephon Tull was rummaging through dilapidated boxes left there by his father many years before, when he came across an interesting find.

"I'm a rummager, a packrat," said Tull. "That piqued my interest."

Tull acquired a reel-to-reel player and listened to what sounded like his father interviewing Dr. Martin Luther King Jr. about nonviolence and the civil rights movement.

"I could not believe what I was hearing," said Tull. 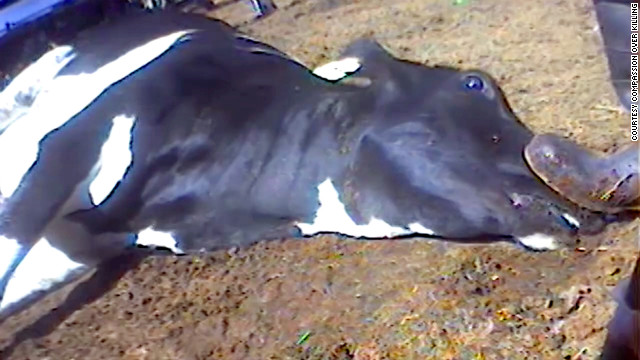 An undercover video released by Compassion Over Killing appears to show workers abusing cows at a California meat plant.
August 22nd, 2012
02:12 AM ET

The U.S. Department of Agriculture is investigating "disturbing evidence of inhumane treatment of cattle" at a California meat supplier, the agency said.

After receiving video from an animal welfare group, the USDA sent investigators to the Central Valley Meat Co. and found violations of humane handling, the agency said in a statement.

What happens in Vegas stays in Vegas - unless you're Prince Harry and TMZ publishes pictures of you, or someone who looks very much like you, cavorting naked during a game of strip billiards.

One photo shows a redheaded man, who resembles Harry, stark naked but for a wristwatch and a necklace.┬Ā The man's hands cup his genitals.┬Ā┬Ā His face is turned toward the television set in the suite. And his body partially shields that of another person, also naked.

The necklace the man has on appears to match one Prince Harry was seen wearing poolside in Vegas on Monday.

Protesters took to the streets to decry police brutality over the weekend after the release of video depicting theŌĆtwitter.com/i/web/status/1ŌĆ”bo
cnni

Protesters took to the streets to decry police brutality over the weekend after the release of video depicting theŌĆtwitter.com/i/web/status/1ŌĆ”bo
cnni