Storm surges up to 12 feet predicted

Thousands of people on the Gulf Coast have been told to leave ahead of Tropical Storm Isaac. Forecasters warn the storm will gain strength and is following the path Hurricane Katrina took seven years ago.

The tropical storm was expected to make landfall late Tuesday or Wednesday, coinciding with the seventh anniversary of Hurricane Katrina, though as a much weaker Category 1 hurricane, compared with 2005's monster storm.

[Updated 5 a.m. ET Tuesday] Isaac is still a tropical storm and is located 125 miles from the mouth of the Mississippi River, moving northwest at 12 mph.

[Updated 11:17 p.m. ET] The National Hurricane Center projected storm surges of 3 to 6 feet for the Florida Panhandle, 6 to 9 feet for the Alabama coast and 6 to 12 feet for the Mississippi and southeastern Louisiana shores.

[Updated 10:02 p.m. ET] Here's another way people can help their neighbors, at this location and others:

[Updated 9:10 p.m. ET] CNN's Anderson Cooper is in New Orleans, ready to bring you the latest on Isaac:

[Updated 9:05 p.m. ET] There will be no flights Tuesday out of the main airports in New Orleans and Baton Rouge, Louisiana, and the airport in Biloxi, Mississippi, will close at 11 a.m., officials said.

FEMA went to Twitter to offer advice on preparing for and recovering from a storm:

[Updated 8:54 p.m. ET] Billy Nungesser, the Plaquemines Parish, Louisiana, president who gained national attention for his outspoken outrage after the 2010 BP oil spill, said the low-lying parish is concerned about the effects of Isaac's storm surge.

"We're still going to be doing battle," Nungesser told CNN affiliate WWL. "We just hopefully can keep it behind the levees." 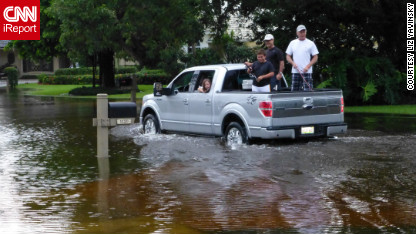 [Updated 6:43 p.m. ET] The Salvation Army is already helping out, and already asking for Isaac-related donations:

[Updated 6:21 p.m. ET] Amtrak has suspended all service into and out of New Orleans Tuesday and Wednesday, but has restored service between Orlando, Tampa and Miami.

[Updated 6:06 p.m. ET] CNN affiliate WLOX in Biloxi, Mississippi, published a list of shelters that are now open or slated to open soon in anticipation of Isaac's arrival.

This afternoon, President Obama was briefed by FEMA Administrator Craig Fugate and National Hurricane Center Director Dr. Rick Knabb on the preparations underway for Tropical Storm Isaac, which the National Hurricane Center has projected could become a Category One hurricane later today. During the briefing, Administrator Fugate provided the President with an update on the resources FEMA has prepositioned along the Gulf Coast to support state and local officials as they prepare and begin to respond. Working with DOD, FEMA has set up Incident Support Bases in Jacksonville, FL and Montgomery, AL to proactively stage supplies closer to areas potentially affected by the severe weather. Additionally, FEMA has deployed response teams to Alabama, Florida, Louisiana, and Mississippi to support state and local officials and to work to make sure there are no unmet needs. The President directed Administrator Fugate to ensure that FEMA was prepared regardless of the ultimate strength and impact of the storm.

Following the briefing, the President convened a call with Alabama Governor Robert Bentley, Louisiana Governor Bobby Jindal, Mississippi Governor Phil Bryant, and New Orleans Mayor Mitch Landrieu. On the call, the President asked Dr. Knabb and Administrator Fugate to provide the Governors and Mayor an update on the storm's track as well as on the resources FEMA has to support their teams. The President made clear that he has directed Administrator Fugate to make sure the Governors have the resources they need as the storm approaches, and asked each Governor to identify additional needs if they arise.

On the call, the President also informed Governor Jindal that he had approved the Governor's request for an Emergency Declaration for Louisiana ahead of Tropical Storm Isaac. The declaration builds on resources already deployed by FEMA and makes Federal funding available for certain emergency activities undertaken by the state to prepare for and respond to the storm.

[Updated 5:08 p.m. ET] Winds in Isaac have increased to 70 mph, just 4 mph short of hurricane strength, according to the National Hurricane Center in its 5 p.m. advisory.  The center also is now forecasting Isaac will be a Category 2 storm with 100 mph winds when it makes landfall in Louisiana or Mississippi on Tuesday night.

[Updated 4:59 p.m. ET] FEMA Director Craig Fugate tweeted a reminder that Isaac will affect a wide swath of the South:

[Updated 4:45 p.m. ET] Because of the storm, Louisiana's Department of Wildlife and Fisheries has pushed the start of alligator hunting season back from Wednesday to Saturday.

[Updated 4:08 p.m. ET] According to the federal agency that oversees oil drilling in the Gulf of Mexico, 78% of oil production in the Gulf is suspended; 346 platforms and 41 rigs have been evacuated.

[Updated 3:55 p.m. ET] About 30 mobile homes were damaged in Vero Beach, Florida, by a tornado that spun off from Isaac, CNN affiliate BayNews9 in Tampa reports.

[Updated 3:46 p.m. ET] CNN affiliate WBRZ in Baton Rouge, Louisiana, reminds people in the path of the storm to make sure their pets have IDs on them, and that people who need help with their pets can call 311.

[Updated 3:31 p.m. ET] This is New Orleans we're talking about, after all. CNN affiliate WWL reports the downtown Rouse's supermarket is selling record amounts of alcohol today as Isaac approaches.

[Updated at 2:02 p.m. ET] The northern Gulf Coast can expect a significant storm surge from Tropical Storm Isaac, the National Hurricane Center said in its 2 p.m. ET advisory. The storm's maximum sustained winds were at 65 mph in the report. The storm was centered about 280 miles southeast of the mouth of the Mississippi River and was moving northwest at 14 mph.

[Updated at 1:54 p.m. ET] For the time being, there will be no mandatory evacuation order in New Orleans, Mayor Mitch Landrieu said today.

"There is no indication the circumstances calls for a mandatory evacuation," he said, but he advised those living outside the protection of the levee system to "strongly consider leaving."

[Updated at 1:17 p.m. ET] New Orleans Mayor Mitch Landrieu said today that he expects the city to be hit by Isaac as a Category 1 hurricane late Tuesday or early Wednesday.

"We are going to have a hurricane that is going to hit New Orleans," Landrieu said at a press conference.

But he said he did not expect the same level of disaster as when Hurricane Katrina struck the city seven years ago.

“There is nothing that this storm is going to bring us that we do not believe we are prepared to handle,” he said.

But he said residents should not be complacent because Isaac is still forecast to be a danger.

"Execute the plans that you have been working on for a very long time,” he said. “I believe that everything is going to be OK.”

[Updated at 12:46 p.m. ET] More than 4,100 Louisiana National Guard troops have been activated to deal with the effects of Tropical Storm Isaac, Gov. Bobby Jindal says.

[Updated at 12:44 p.m. ET] More than 2,000 prisoners will have been evacuated from facilities in danger areas by the end of Monday, Louisiana Gov. Bobby Jindal says.

“If anybody is thinking about evacuating, today is the day to do it,” he says.

[Updated at 12:32 p.m. ET] Louisiana Gov. Bobby Jindal says he will not attend the Republican National Convention in Tampa to deal with the effects of Isaac on his state.

Why Isaac is different from Katrina - HLN

[Updated at 11:48 a.m. ET] Coastal Mississippi can expect storm surges of 10 to 12 feet, which with a 4-foot high tide, could bring waters up to 16 feet to the coast, Gov. Phil Bryant says in a press conference.

A state-by-state look at Isaac

[Updated at 11:11 a.m. ET] The tornado warning for parts of Orange and Seminole counties in Florida has expired, but the National Weather Service says storms associated with Tropical Storm Isaac may still produce dangerous winds of 40 to 50 mph.

[Updated at 11:06 a.m. ET] The rainfall from Isaac could be a big relief for drought-stricken portions of the U.S., according to a report from Reuters.

[Updated at 11:01 a.m. ET] Tropical Storm Isaac has left tens of thousands of customers in Florida without power, Florida Power and Light reports. Check their power tracker to see where the problems are.

[Updated at 10:58 a.m. ET] Tropical Storm Isaac is curtailing oil production along the Gulf of Mexico and threatening refineries, which could send already rising gasoline prices up another 10 cents in the coming week, CNNMoney reports.

[Updated at 10:57 a.m. ET] The National Weather Service has issued a tornado warning for parts of Orange and Seminole counties in central Florida.

[Updated at 10:54 a.m. ET] Isaac could produce storm surges of 6 to 12 feet if the peak surge occurs at high tide, the National Hurricane Center says. Areas expected to get the worst of the surge are the coasts of southeast Louisiana, Mississippi and Alabama.

[Updated at 10:46 a.m. ET] Tulane University in New Orleans said it is canceling evening classes on Monday and all classes on Tuesday and Wednesday, but in a posting on its website says Isaac should not present the problems that Hurricane Katrina did seven years ago.

"The latest update from Tulane’s weather service indicates promising trends for the New Orleans area regarding lower winds and rainfall associated with Isaac," the website said. "According to the service, the storm differs from Katrina in that is far weaker and is approaching New Orleans from a different angle."

[Updated at 10:36 a.m. ET] In a telephone interview with CNN's Carol Costello, Tim Kerner, mayor of Jean Lafitte, Louisiana, urges residents to comply with evacuation orders, even though Isaac is not expected to be of the strength Hurricane Katrina was seven years ago.

While the winds and storm surge from Isaac are not forecast to be as strong as Katrina, Kerner said residents still put themselves in danger by staying put during the storm.

“What they fail to realize is that if they start getting chest pains or any kind of medical attention that they may need, nobody’s going to be able to get to them,” Kerner said.

Berger writes that Katrina was a 100-mph hurricane when it was in the position Isaac is now. Katrina was also feeding on warmer water than Isaac has, Berger says.

"Katrina had warmer water, and water warmer at depth, to cross before reaching the coast. As hurricanes move across the surface of an ocean they churn up water, and almost invariably the water at depths is cooler than water at the surface. A storm that churns enough cold water to the surface can choke off its heat source, so if a storm is going to intensify rapidly the water beneath the surface must be warm as well."

[Updated at 10:01 a.m. ET] A mandatory evacuation has been ordered for parts of Plaquemines Parish, Louisiana, beginning at noon local time, according to the parish's website. Other parts of the parish will be under a voluntary evacuation order, the website says. Schools in the parish are closed until further notice.

[Updated at 9:53 a.m. ET] The cities of Pass Christian and Gulfport in Mississippi were declaring states of emergency on Monday morning, the Biloxi Sun Herald reports.

[Posted at 9:15 a.m.] Isaac is beginning to become better organized visually, but remains a tropical storm with winds of 65 mph, moving west-northwest northwest at 14 mph, the National Hurricane Center said in its 8 a.m. update.

The forecast track remains virtually unchanged and still takes Isaac into the Louisiana coastline, just slightly southwest of New Orleans, as a strong Category 1 hurricane with winds of 90 mph.