South Carolina and Montana are ending federal pandemic unemployment benefits for their residents next month, the fiātwitter.com/i/web/status/1ā¦5h 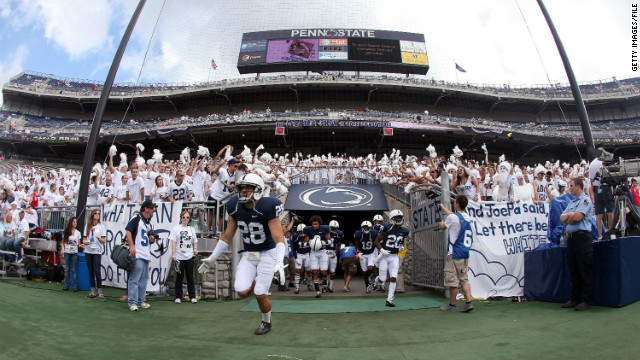 No 'Sweet Caroline' at Penn State games, no public allowed in most athletic facilities

Penn State football fans will no longer be singing "Sweet Caroline" while cheering on their Nittany Lions, according to university officials.

Neil Diamond's classic song, often sung at sporting events and particularly at Boston Red Sox baseball games, has been rotated out of the playlist for Beaver Stadium this year.

Chatter quickly began building on the State College campus and on social media platforms after the Altoona Mirror newspaper reported that officials were concerned about the lyrics to the song, in the wake of the Jerry Sandusky scandal.

Sandusky, a former assistant football coach at the university, was convicted in June of sexually abusing 10 boys over 15 years. He continues to maintain his innocence.

The song, said to be written about Caroline Kennedy, contains the lyrics: "Hands, touching hands, reaching out, touching me, touchingĀ you."

But those words, and the scandal, have nothing to do with removing the song from the game day playlist, Penn State spokesman David La Torre told CNN.

"Absolutely no song changes were made based on lyrics. This song has come up on the list in recent years because it happens to be played in so many other professional and collegiate venues and has no real origination here at Penn State," he said. "So while wholesale changes to what happens on game day are not in store, some 'updating' is going to occur, including the music playlist."

La Torre said the updating happened to include "Sweet Caroline" and noted that these changes happen "each year for both recorded music and the Blue Band," which plays at the games. The Altoona Mirror has recently updated its story to reflect that the choice was not made because of song lyrics.

While the playlist update may not be a result of the scandal, there has been one change that grew out of the Sandusky incident.

The numerous athletic facilities around Penn State will no longer be available to the public, a decision that Penn State spokeswoman Lisa Powers tells CNN was made as a result of several factors.

One of those factors was a recommendation made in a report to evaluate security and access to these facilities. The report followedĀ anĀ investigation headed by former FBI Director Louis Freeh, which found that several university leaders had "empowered" Jerry Sandusky to continue his abuse.

"Until this change we were the only institution in the Big Ten that allowed any members of the public to access our facilities," Powers said. "We are always concerned first and foremost about the safety of people on our campus, and permitting anyone to access the facilities without challenge increases the possibility of a safety concern."

The ice rink, natatorium and the golf course are the only places where the new policy won't apply. It will apply to the Lasch Football Building whereĀ MichaelĀ McQuearyĀ said he observed Sandusky involved in sexual activity with a boy in the coach'sĀ showerĀ room.

Powers added that the school also decided that the facilities should foremost benefit the students, who in some cases paid fees to help them be built. She added that there are limited athletic and recreationalĀ facilitiesĀ on campus and the school wanted to make sure students had access to the areas they needed.

"For all these reasons, it was in our best interest to update our policies in this regard," Powers told CNN.

A 2,000-year-old marble head of Augustus, Rome's first emperor, has been discovered in Isernia, an Italian town inātwitter.com/i/web/status/1ā¦7M
cnni

12:01 am ET May 7, 2021 RETWEET
Seriously? āA controversial proposal to allow Texans to carry handguns in public without obtaining a license or tratwitter.com/i/web/status/1ā¦mswS
susancandiotti

11:33 pm ET May 6, 2021 RETWEET
Peloton is estimating its treadmill recall will cost the company about $165 million in lost revenue during the theātwitter.com/i/web/status/1ā¦Bt
cnni

11:01 pm ET May 6, 2021 RETWEET
Unaccompanied migrant children now spend an average of around 24 hours in US Border Patrol custody, a Biden adminisātwitter.com/i/web/status/1ā¦0v
cnni