Raul Castro announces he is stepping down as the head of Cuba's communist party. His departure brings an end to the‚Ätwitter.com/i/web/status/1‚Ä¶MV

A family member of the suspect in the Indianapolis mass shooting warned authorities about the suspect's potential f‚Ätwitter.com/i/web/status/1‚Ä¶SX

Russia will expel 10 US diplomats to retaliate against President Biden's sanctions against the Kremlin, Foreign Min‚Ätwitter.com/i/web/status/1‚Ä¶BT

A heavy metal guitarist with ties to the Oath Keepers is the first to plead guilty to crimes related to the US Capi‚Ätwitter.com/i/web/status/1‚Ä¶eW

President Biden will sign a declaration today to speed refugee admissions to the US but not raise the refugee cap,‚Ätwitter.com/i/web/status/1‚Ä¶ZM 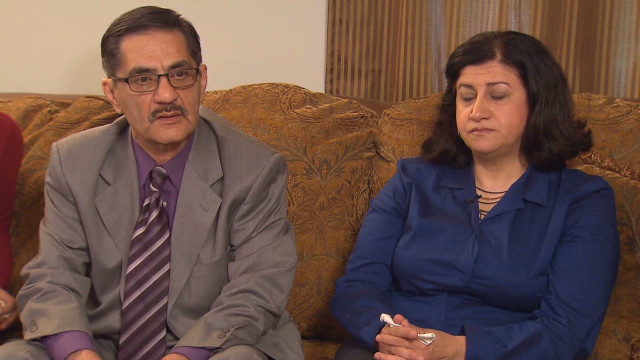 Family of Marine imprisoned in Iran plead for his release

Relatives of a former U.S. Marine jailed in Iran for allegedly spying for the CIA say they are pleading with the leaders of the Islamic Republic to show mercy and set Amir Mirzaei Hekmati free.

"I just want to ask President (Mahmoud) Ahmadinejad and the Supreme Leader Ayatollah Khamenei, these two are our only hope. These two can bring Amir home," pleaded Behnaz Hekmati, Amir's mother.

With reluctance and much apprehension, the Hekmati family opened their home to CNN and sat down for an exclusive interview, their first since Hekmati was arrested on August 29, 2011.

"The struggle is the lack of communication," said Sarah Hekmati, Amir's sister, "going from talking to someone daily, weekly, and visiting on holidays to absolutely nothing and not knowing what's going on."

Amir Hekmati, 29, was born in Arizona, and was raised in Nebraska and Michigan. His family described him as an all-American guy with a yearning to travel and a love of languages. They said he is an outgoing, athletic individual who joined the military to help his family financially and a man who is proud of his service in Iraq.

His family says he wanted to learn more about his culture and heritage. This was his first trip to Iran and he was looking forward to visiting with relatives, especially the maternal grandmother who helped raise him.

But after two weeks in Iran, Hekmati was arrested, and his family says he was not charged with anything for months.

But in December of last year Amir's parents say they were shocked to see a video broadcast on Iranian TV showing their son confessing to espionage. In the edited and highly produced video, Hekmati utters his name in English speaks in Farsi describing his work as a U.S. Marine and seeming to confirm the allegations of the Iranian government that he was an Iranian-American working as a CIA agent.

"They forced him to do that. That's not true," said Hekmati's mother, referring to the alleged confession.

"They knew he was a military (soldier) because he told the Embassy of Iran he was in the military," she adds, explaining that her son checked with Iranian authorities in the United States before making the trip.

"He's not a spy, he's not working for the CIA, we know that, we are sure, absolutely," Behnaz Hekmati said.

The U.S. State Department also denies Hekmati was spying for the U.S. government and calls this case a gross miscarriage of justice.

"We never thought he should have been arrested. We've been trying, because he's a dual U.S.-Iranian national, we've been trying to get access to him since he was originally locked up," said State Department spokesperson Victoria Nuland. "The Iranians have never allowed us to go to see him."

Amir's mother has traveled to Iran three times and has been granted limited visits. She described her son as disheartened and completely confused as to why he was arrested.

"He is skinny, pale, like a chalk, his face was like chalk. Hair was shaved, had a beard, he walked like this and the feet was together he walked like a robot," she said. "He couldn't stop crying and he was (saying) 'I don't know why I'm here,' Mom."

The Hekmatis say their son now has a government- approved lawyer in Iran although contact with him has been sporadic. A lower court in Iran sentenced Hekmati to death in January, but the nation's Supreme Court annulled that sentence less than two months later and ordered a retrial. The lower court previously had convicted Hekmati of "working for an enemy country," as well as membership in the Central Intelligence Agency.

The Hekmatis now believe their son will be granted a retrial, but no date has been set and the family says they have very little information about the legal process.

For Amir's twin sister, Leila, the worry and the waiting have been all too overwhelming.

She read from a card he wrote her on their joint birthday last year, before he went to Iran: "'(T)ime has passed but one thing hasn't changed and that's the bond I share with my twin sister. I will never be alone no matter where I am.'

"At night I just think about him; I feel so helpless. I feel like I can't do anything. Just please, bring him home," she pleaded, hoping Iranian leaders will hear her.

Ali Hekmati, Amir's father, said he believes the best chance they have of bringing Amir home soon is appealing to the Iranian leaders directly.

"It's going to take some cooperation from Iranian leaders," he said. "The leadership needs to show some leniency and some cooperation in helping out a crying mother and sister and a father who loves his son dearly.

Helen McCrory, the British actress best known for her roles in the 'Harry Potter' films and 'Peaky Blinders,' has d‚Ätwitter.com/i/web/status/1‚Ä¶Y2
cnni

3:32 pm ET April 16, 2021 RETWEET
While no one is denying the problems, Gr√ºnenthal, the pharmaceutical company, its Chilean subsidiaries and governme‚twitter.com/i/web/status/1‚Ä¶PKS
cnni