The supermarket shooting suspect made a threat while attending high school last year and was sent for a mental healātwitter.com/i/web/status/1ā¦Hz

Sweden's Social Democratic Party has decided the country should work toward a Swedish application to join NATOātwitter.com/i/web/status/1ā¦lW

The FBI is launching a hate crime investigation as local officials call the shooting that left at least 10 people dātwitter.com/i/web/status/1ā¦Tq

At least 8 people are dead and a suspected shooter is in custody after a mass shooting at a Buffalo, NY, grocery stātwitter.com/i/web/status/1ā¦4Y 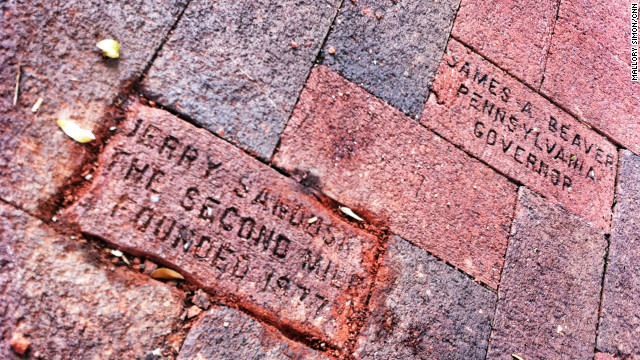 A brick bearing Jerry Sandusky's name and that of his Second Mile charity has been removed from a walkway in downtown State College, Pennsylvania.

The brick is one of nearly 3,000 along Centennial Walkway in the downtown part of campus. The bricks bear the names of many notable figures from Penn State, including former President Graham Spanier and his wife as well as other alumni.

The Sandusky brick had gone mostly unnoticed as students passed through McAllister Alley, not far from the school's Old Main building, until it was noticed on Wednesday by the student-run independent Penn State blog Onward State and photographed by others, including a CNN journalist in State College.

The photo prompted calls for it to be pulled up, considering the school had torn down a statue of legendary former coach Joe Paterno in the wake of a scandal that has left Sandusky jailed for sexually abusing 10 boys over a period of 15 years. The school had no authority to remove the brick, many mentioned, since it wasn't on Penn State property.

Pat Daugherty, owner of the Tavern, a restaurant located along the walkway, said he received a call from State College Borough Manager Thomas J. Fountaine II on Thursday morning saying he had received calls after the photos circulated online.

"We honestly were not aware the brick was there until a day or two ago," Fountaine said.

He said it took a couple days to figure out whether officials could remove the brick, because ownership of the pedestrian walkway was unclear, but it wasn't specifically borough property.

That's when Fountaine called Daughterty, who offered to remove the brick.

"There was some vandalism that was occurring as well," Fountaine said. "Because of that and other issues, we thought it was appropriate to remove it."

Daugherty said he would probably return the brick to the borough because somebody had probably paid to have it put there during the school's centennial celebration.

A seven-foot man pulls up at a Serbian stable in a horse-drawn carriage. Within moments, he's in tears. cnn.it/3PpP7Fs
cnni

12:00 am ET May 16, 2022 RETWEET
RT @Acosta: What Tucker Carlson is doing by peddling āreplacement theoryā and other white nationalist talking points is dangerous and we caā¦
susancandiotti

11:19 pm ET May 15, 2022 RETWEET
The Formula One season is only five races old, but it already has a different complexion compared to previous years. cnn.it/3LkUR02
cnni

4:05 pm ET May 15, 2022 RETWEET
The supermarket shooting suspect made a threat while attending high school last year and was sent for a mental healātwitter.com/i/web/status/1ā¦Hz
cnnbrk

2:50 pm ET May 15, 2022 RETWEET
Sweden's Social Democratic Party has decided the country should work toward a Swedish application to join NATOātwitter.com/i/web/status/1ā¦lW
cnnbrk