Could Boo Boo be the next Smokey Bear?

Idaho officials say the popularity of a baby black bear given the name Boo Boo, who was rescued after being burned in a wildfire, may help remind people of the wide consequences of wildfires.

"People from all over the country have asked after the bear," Idaho Fish and Game conservation educator Evin Oneale said. "Many have asked about contributing money to offset the cub's medical treatment costs."

Boo Boo was brought to the Idaho Humane society after firefighters found him last week while battling the Mustang Complex Fire that has scorched more than 250,000 acres in Idaho.

“He’s healing nicely,” Dr. Jeff Rosenthal, Director of the Idaho Humane Society said. “His pads and toes are no longer bleeding and new skin is already forming on the burned portions.”

Officials said the bear, which weighed 23 pounds when they first rescued it, is expected to make a full recovery. And Boo Boo is starting to act more like you'd expect of a black bear.

“Eating like a little pig, very feisty, and not very social,” Rosenthal said. “He charges the cage front whenever anyone gets near, trying to scare us off.”

Photos of the bear after he was rescued last week show how rescue workers wrapped his paws in red gauze and gave him medication.

"When they see Boo Boo, they can see what can happen when fire gets out of control," Cyd Weiland with the Boise National Forest told CNN affiliate KTVB. "Having Boo Boo, having Smokey Bear, is a really good reminder to always be careful with fire." 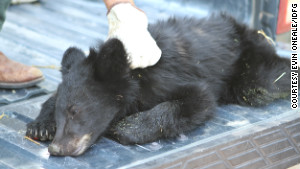 After the bear was found, rescuers began to treat wounds on his paws.

The bear clung to a tree when rescuers first approached him and was hobbling on his paws.

"Fires burn in the woods and in the mountaintops, and it drives all the animals down," Larry Colozzi, an engine boss with the U.S. Forest Service Fire Department, told KTVB. "(Boo Boo) was on the trail hurt. We got about 10 or 15 feet from him and took some pictures of him and then we got a little closer and he kind of scampered up a tree. His paws were hurt so he was going kind of slow."

The executive director of the Idaho Humane Society said the bear will be treated by vets each day to make sure it heals, but they also have to make sure the bear doesn't get attached to those caring for him to ensure he can safely be returned to the wild.

"The first goal is to save Bernard, or Boo Boo's life, and the second priority is to try to make sure that he doesn't get used to being around people," Jeff Rosenthal told KTVB.

The Humane Society said it had received $1,000 in donations and food for the bear just over the past couple of days.

"The donations are very much appreciated, but what we really need now are berries of any kind, be they strawberries, blackberries, blueberries or whatever,” Rosenthal said. “But no more apples, please. We have enough donated apples to bake him an apple pie every day this month."