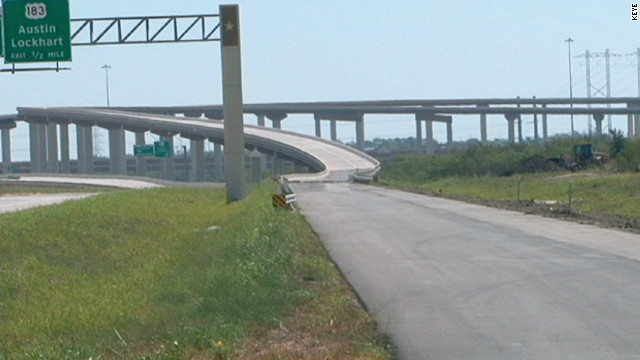 The saying goes that everything is bigger in Texas. This fall that will apply to speed, too.

The Texas Transportation Commission has approved an 85-mph speed limit for a new toll road between Austin and San Antonio. It will be the highest speed limit in the United States, according to local news reports.

The toll road is a 41-mile stretch of  Texas State Highway 130 known as Segments 5 and 6, running from Mustang Ridge near Austin to Seguin outside of San Antonio. If motorists drive at the speed limit, they'll cover the 41 miles in less than a half hour.

The 85-mph limit surpasses the current high in the United States, set on portions of Interstate 15 in Utah and sections of I-10 and I-20 in west Texas, according to the Insurance Institute for Highway Safety.

But are the higher speeds safe?

The Insurance Institute says the higher the speed, the more dangerous for the motorists. Higher speeds limit reaction times, increases braking distances and put stresses on safety equipment in cars and on roads, the institute says.

"There are limits to the amount of crash energy that can be managed by vehicles, restraint systems and roadway hardware such as barriers and crash cushions. The higher the speed, the higher the likelihood that these limits will be exceeded in crashes, limiting the protection available for vehicle occupants," according to the institute's website.

"Safety is our top priority and tests have shown the designated speed is a safe one," Mark Cross, a spokesman for the Texas Department of Transportation, is quoted as saying by the Texas Tribune.

The SH 130 Concession Co. which built and will operate the toll road, says motorists bear responsibility for safety.

"We are committed to operating a safe, reliable highway for our customers. On any road, drivers hold the key to safety based on traffic, travel conditions and the capabilities of their own vehicles," the company said in a statement, according to the Houston Chronicle.

Tolls have yet to be set, but whatever they are drivers won't have to slow down to pay them.

"There will be no toll plazas on segments 5 & 6 of SH 130. Tolls will be collected electronically at certain points along the roadway, meaning motorists will not have to slow down or stop. Traffic will be 100% free flowing," according to The SH 130 Concession Co., which was formed by the Spanish construction company Cintra and the Texas company Zachary American Infrastructure.

Officials hope drivers will use the highway to avoid and alleviate congestion on Interstate 35, which the toll road operators say is more congested in the area than at any part in its entire length, from Canada to Mexico.

"We look forward to opening this segment of SH 130, which will help reduce congestion for the Austin-San Antonio corridor by providing Texas drivers and others with an alternate route for traveling through our great state," Cross told the Texas Tribune.

The toll road is required to open by November 11 but may open sooner.

"We are confident we will be open ahead of schedule,” Chris Lippincott, spokesman for the SH 130 Concession Company, told Texas Weekly.

While the higher speed promises quicker trips for drivers, it also means more money into state coffers. The concession company will pay the Texas Department of Transportation a $100 million bonus for the 85-mph limits, the Texas Tribune reported. If the limit had been set at 80 mph, the bonus would have been only $67 million, according to the report.